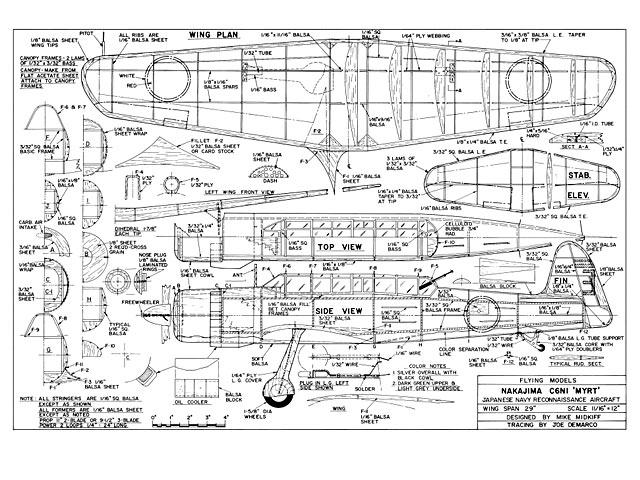 Quote: "Nakajima C6N1 Myrt, by Mike Midkiff. Too late to make its presence felt in WW II this lean and extremely fast recon design was one of Japan's finest efforts. It has the ideal moments for freeflight scale.

This sleek, rakish appearing aircraft was very dean with the exception of the external oil cooler mounted on the port side lower cowl. Laminar flow wings, which were equipped with Fowler and split flaps along with leading edge slots which effectively enhanced its overall performance envelope. It was equipped with only one rearward firing machine gun which indirectly emphasized the fact that Myrt could pull away from anything our Navy could throw up.

Myrt entered combat during the battle of the Marianas and, with the incredible range of 3000 miles, she continually shadowed the US fleet up until the war's end. Further C6N development resulted in a proposed torpedo bomber with forward firing armament; however, the loss of practically all of Japan's aircraft carriers precluded any further development.

By then, near the close of the war, the home defense role became critical and Myrt, with her speed, range and ceiling, traded in one of her three crew members for a pair of oblique firing 20 mm cannons. Thus armed, she joined other piecemeal squadrons who slugged it out with the ominously increasing B-29 formations. Myrt had the dubious distinction of being the last aircraft shot down in WW II.

In model form Myrt presents some delightful proportions for a rubber powered scale ship: slim, clean, front profile, and a long nose moment with an equally well located and proportioned empennage. The typical long greenhouse canopy, so characteristic of Japanese aircraft of the war, is well repre-sented in this model. Also the peculiar, raked forward rudder enhances the overall appear-ance of this sleek Japanese reconnaissance aircraft.

As is typical of all of my WW II models, the landing gear is constructed to plug into the wings which allows flight with or without the LG. The real Myrt used either a three of four bladed prop, so I chose a semi-scale three bladed prop built into the neat spinner. My semi-scale props seem to give as good performance as two bladed props and I think they contribute to the overall scale effect of the aircraft.

Straight forward construction is typical except for the method used to construct the engine cowl, wing fillets and canopy All balsa wood used throughout the construction should be of the lightest available except for the 3/32 square main longerons and the wing spars: these should be from medium to medium-hard balsa. For added weight reduction, lightening holes are punched in the ribs and formers, being careful not to affect structural integrity. All of thew measures should result in a total airframe weight, less motor, of 3 ounces or less..." 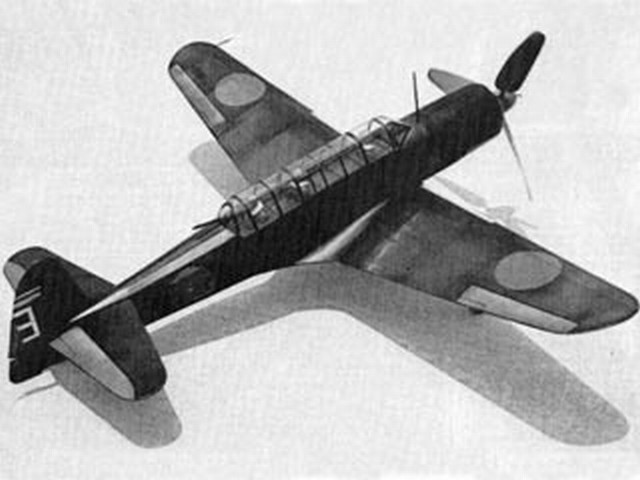