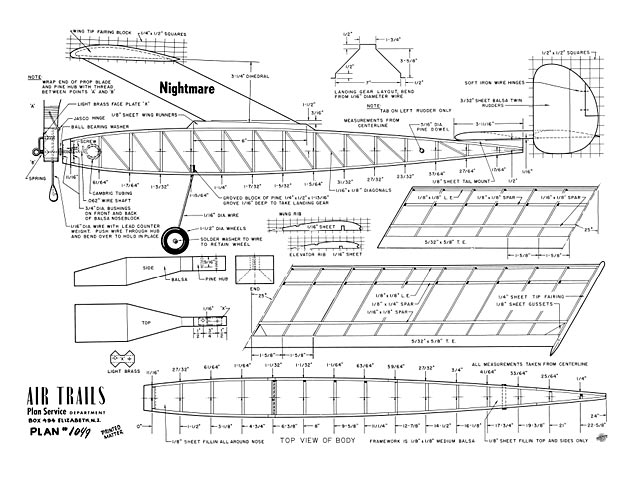 Quote: "No. you're not dreaming. It's an honest-to-goodness T-56 rubber job with a new slant (or two). Performance is unusually good. Nightmare, by Al Casano.

THE unusual appearance of this ship prompted its name, so henceforth, Nightmare it is.

This design is no accident, but rather the result of long, and sometimes painful, experimenting with different combinations of wings, stabs, props, airfoils, and ideas. The author has been designing and building for twenty years and believes that rubber-powered jobs give more satisfaction, and afford more oppor-tunities to really study model aerodynamics than any other class of models.

Take this job, for instance - the requirements were a crate of unusual appearance, combined with good flight characteristics. We built a thirty-degree swept-forward wing, with equal sweepback in the stabilizer. It was not so good - the stability wasn't there. Larger rudders, smaller rudders, deeper fuselage - they were all tried, but still the stability was only fair. So we tried again, with a twenty-five degree set up - and that was it! A total of three ships were built, and the third, Nightmare, was the ship we wanted. This plane is really easy to build - only one size wing rib, only one size stab rib, sheet rudders, no body formers - it's a cinch!

But talking won't build it, so let's go. First build the two fuselage sides. Pin down the top longeron (you can stick pins through wood without damage if you use the thin steel pins and not the fat ugly brass ones). Place a drop of cement on side of longeron at each point where cross brace meets longeron. Put in cross braces, cutting off at bottom longeron outline. Now put in diagonal braces, cut to length, and then cement in bottom longeron. Work carefully here.

When first side is thoroughly dry (in about two hours) make the second side, and let dry. It is important that sufficient time be allowed for drying on all parts. Take the two finished sides and place over plan view in a 'standing up' position. Cement together at back, put in the two cross-pieces at nose block end, and allow to dry, using steel squares or any fairly square objects to keep the two sides braced upright. Next add all cross-pieces and landing gear, taking sizes from plan. When dry, sand well, and cover with Silkspan. Don't let fuselage hang around uncovered for too long a time - it may warp or twist. Now make nose block per plan, and drill out planked section at rear for dowel, to hold rubber at rear.

The prop may be carved by hand from a solid block, or any machine-cut prop of 12 in dia may be used. Jasco prop-folding hinges will simplify the 'tool making' end, and for the boys who don't like to bend shafts for props..." 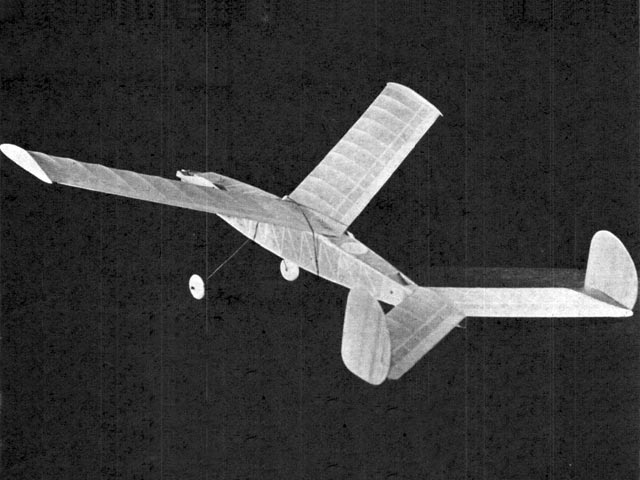