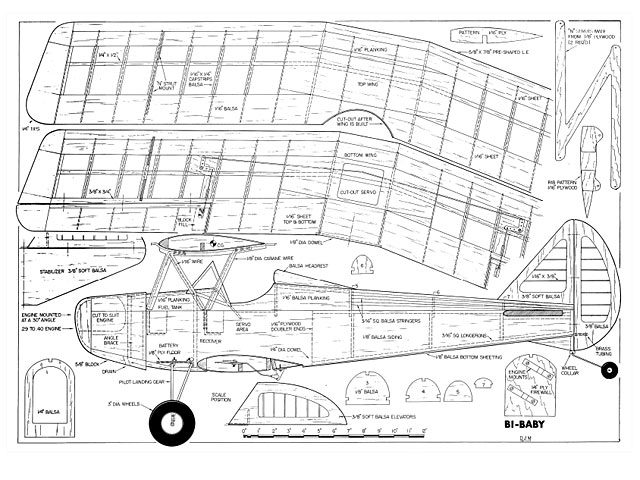 Bi-Baby. Scale model for radio control, of the Biplane version of the Bowers Fly Baby.

In 1957 the EAA came up with a nationwide contest for the home airplane builder. The object was to develop an easy-to-build, easy-to-fly airplane that the average person could build without being a skilled mechanic. The contest was put off for one reason or another until each of the requirements was fulfilled by the contestants. The plane had to have folding wings, be able to be towed to the airport by the family car and be stored in the garage at home. All these requirements were finally met and won by ex-modeler Pete Bowers and his Fly Baby in the 1962 fly-in at Rockford, Illinois. Later this same airplane was converted to a biplane. With a few connection modifications the Fly Baby could be changed from one configuration to the other.

The reason the extra set of wings was made for this highly successful homebuilt was because as the body set alone without wings attached all who saw it expected it to be a bipe when put together. The fuselage has the looks of an old-time WWI two-winger.

It wasn't much of a problem to design the Fly Baby into a bipe, except perhaps the chord of the wing and the proper gap. It required putting the center-section ahead of the pilot to allow him entrance and exit from the cockpit, sweeping the outer panels rearward, bringing the center of lift in line with the existing CG. Since this area would be ahead with a straight lower wing, the bottom wing panels had to be swept also.

The resulting configuration captured something of the looks of a Tiger Moth and a Bucker Jungmeister, along with several other aircraft seen in the 1st war flicks. The performance however is everything a beginner could desire. The craft is docile on the controls, it has a low landing speed and takeoffs are as docile as a Piper Cub. All in all this craft built by a modeler makes for a very excellent radio controlled airplane and it is highly recommended to anyone who finds appeal in the homebuilt line of aircraft.

Our model of this design came into being through the urgings of a good friend Andre Bruens of Ede Holland. He had been urging us to draw up and build a biplane that would be easy to build and fly, yet able to do all the varied maneuvers that modern modelers demand. I had put off the project for one reason or another, but recently I was stricken with a coronary heart attack. After a stay in the hospital the doctor said: go home and tinker with your models and nothing else for awhile. This gave me the time to catch up on some of those projects that all modelers want to do, but never seem to find the time for.

The looks of the Fly-Baby were still rooted in my mind and in fact FM published a stunt version of it a few years ago. It flew well to - so with a radio version in mind, out came the three-views and we were off and running. For a starter a color slide of the 3-views projected onto the wall. After determining that they were in good proportion we measured the wings and slid the drawing board into place for a 2 in to the foot outline. This produces a 44 in span wing, a perfect size for a .40 powered bipe. It was the intention to stick to scale on the design until it was heard that it had already been done. Stand-Off Scale then, which allows for a more acrobatic airfoil. We also changed the wing hook-up to rubber bands for the novice builders who like the easier route. It was also decided to try a premade Pilot landing gear which offers great ground handling qualities. Other than for these modifications mentioned, the ship is still very close to scale.

Construction got underway soon after deal was made with a friend who was busy rebuilding his '46 Aeronca Chief. I needed his stack of balsa and he needed loot for the Chief. About two clays later it dawned on Jerry as to just what kind of crazy mistake he made in the heat of the moment and now he comes over every couple of days or so just to visit his wood..." 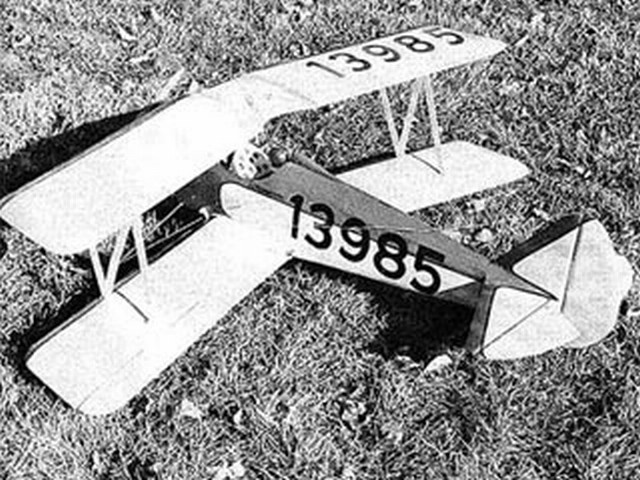