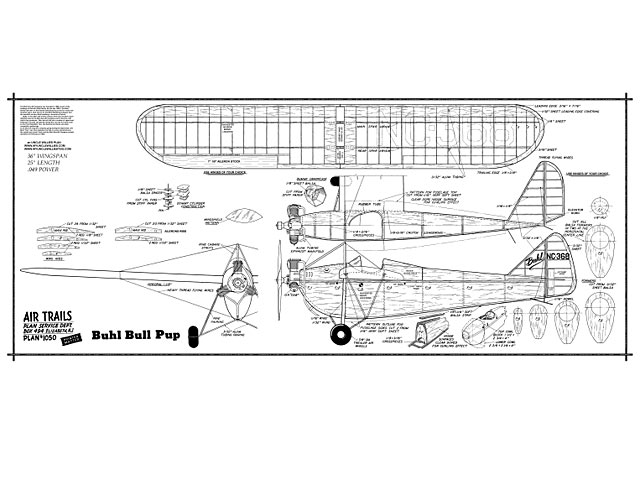 Quote: "A gem for the free flight scale enthusiast - and we see those scale stunt men grabbing this one but quick. Buhl Bull Pup, by Charles Hollinger.

Twenty years ago the Buhl Aircraft Co. announced their new lightplane the 'Bull Pup.' Several versions were produced with wingspreads ranging from 27 to 36 feet. This resulted in either a high top speed plus high landing speed with the small wing, or a slight sacrifice in speed for slower landings and higher ceiling with the 36-foot wing installed.

The Pup seated one occupant, had a three-cylinder Szekely in the nose and a top speed of 90 mph, which was doing right well for only 45 horses. The fuselage was of all-metal monocoque construction. It was one of the first lightplanes to use this advanced feature.

Our model happened to be one of those last-minute affairs built for entry in last year's Nationals. In spite of the rush job it received the highest points for workmanship and scale of all the rubber-power flying scale entries, dropping to third, however, when the flight points were added. This was with two official flights since the rubber motor broke on the third wind-up, necessitating repairs to the fuselage.

AT's editors saw the Pup at the Nats and thought it would make a good Half-A flying scale. The changeover from rubber to gas power was very simple and has resulted in not only an attractive display scale model but one that is an exceptionally stable and a realistic flyer as well.

The real cylinder fits into the nose so perfectly that it takes at least a second look to discover 'which triplet has the piston.' Any of the small motors from .035 to .049 may be used for free flight. If you would like to convert the Bull Pup into a scale control liner, the best performance would be with .074 to .099 motors.

The fuselage may be started by laying out two strips of 1/8 x 3/16 over the top view of the plans. Use pins to hold them in place along the fuselage outline. This wil furnish the crutch onto which the fuselage formers will be attached..." 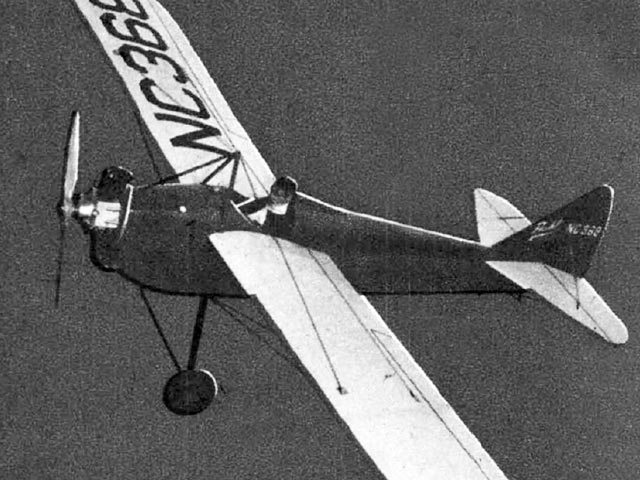