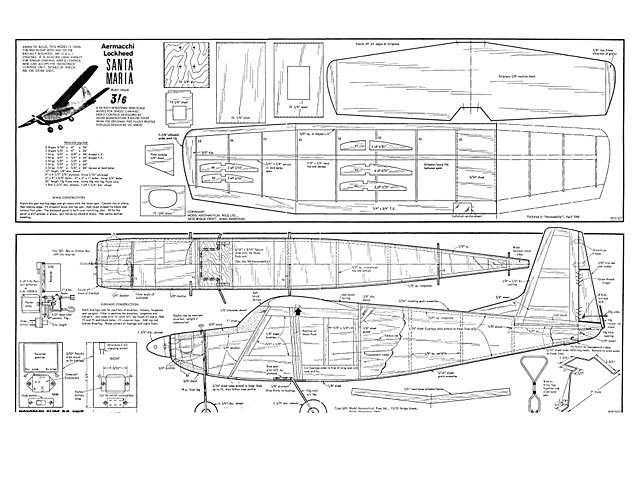 WHEN a free flight profile model of the Santa Maria (oz1513) appeared as a full size plan in the August 1963 issue of the Aeromodeller I made a mental note to make an R/C version of it one day. It took me nearly four years to get around to producing the plans but when the proto-type made by David Toyer flew, I knew the wait was worthwhile.

The Santa Maria makes an attractive and compact model with ample fuselage area for any radio installations although the Mono Pack featured in January Aeromodeller is recommended for it. In spite of the ample width of the fuselage on the model it is in fact, still over an 1/2 in less than scale! The tailplane area and dihedral angle of the wings are also non-scale but it is suggested that these, as shown on the plan, are adhered to in the interests of achieving an easy to fly stable model.

This design is not intended for the scale purist but for the sports flyer who likes a simple to build model with the appearance of a full size aircraft. The Santa Maria is also tough enough to cope with the week-end button pusher without too much experience.

Construction. Cut out all parts before commencing construction and check for accuracy against the plan. PVA white glue can be used for all parts of the construction and, although it takes longer to dry, is generally superior in strength to balsa cement, particularly where hardwood or plywood is being used. Brief notes only on construction are given here as the model is quite straightforward and should present no difficulties to the modeller of any experience. It is not recommended as an absolute beginners model.

Cut out the fuselage sides and mark on the positions of doublers, formers, longerons and uprights (one left hand and one right hand side). Glue in position the doublers, longerons and uprights and leave to dry. Add the formers F2 with U/C leg fixed, F3 and 4, noting the angle of F2 to provide engine side and down thrust. When set add formers F1 and F5 and block balsa at the rear of the fuselage. The main undercarriage wire should be sewn and glued to the 1/8 in ply plate before being fixed to the underside of the fuselage, make sure that this plate is well glued to the fuselage sides and doublers. After the top and bottom sheeting has been completed the corners of the fuselage rear and underside can be slightly rounded off and the cabin front and nose shaped as shown on the plan.

Tail Surfaces are of simple basic construction, the rudder should not be hinged to the fin until the completion of decorating and fuel proofing, etc. to obtain as free an action as possible. The trim tab is hinged with aluminium strip or soft wire.

For maximum strength and durability the model is best covered with lightweight nylon or silk and this is to be recommended. Try to keep the weight of the decoration to a reasonable minimum, a useful tip here..." 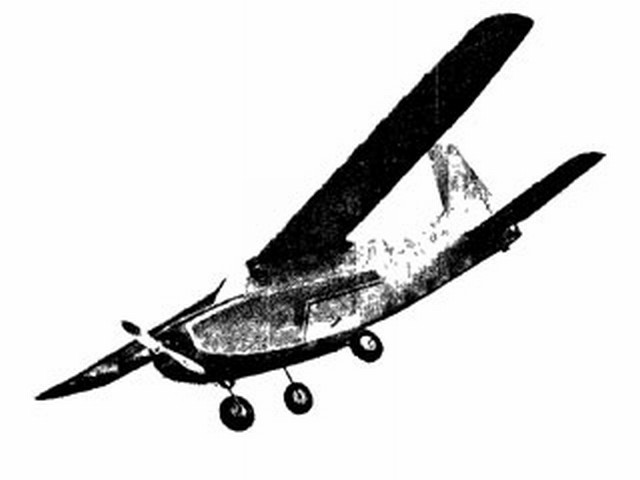 I built and flew this superb model back in the seventies, I found it pretty easy to fly, as a beginner myself, so would recommend it to anybody. I have transcribed the plan into CAD software, and produced some cutting sheet files for laser or CNC mill, which will speed up the build process considerably! If you have access to such cutting equipment, or you know somebody who does, the files and my thoughts on the project can be found on my new forum: http://thescratchbuildersguidetothegalaxy.club/thread/36/aermacchi-lockheed-santa-maria So, come on over and have a gander.
Andy - 12/10/2015
Add a comment