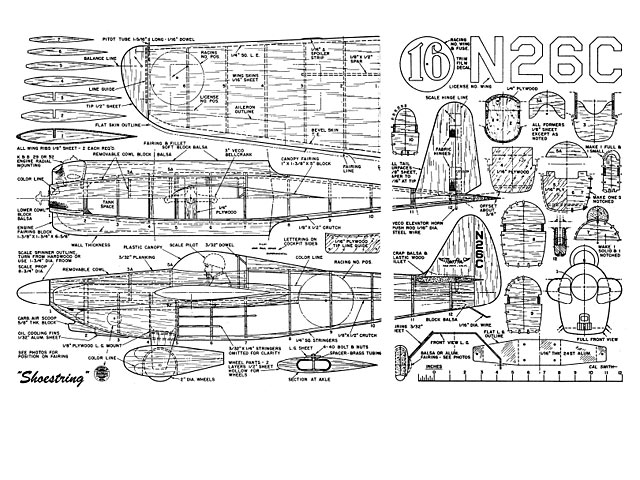 Quote: "Since the inauguration of the Midget racing class in 1947 under Goodyear sponsorship, the basement-built pylon polishers have shown remarkable progress in design and performance. Race speeds have jumped from 165 mph (1947) to 200 mph, and the airplanes themselves have demonstrated the high degree of craftsmanship and ingenuity of the individual builders in gaining so much performance from the 85 hp Continental engine.

Now sponsored by Continental Motors, the midget races held in Detroit in September 1951 saw Shoestring a second-time winner of the big prize.

Pilot John Paul Jones, from Van Nuys, Calif., turned in the highest qualifying speed of 197.2 mph, and flew the race to win at an average speed of 199.778 mph. Which meant that some of the laps flown were well over 200 mph. Equal credit must be given to both pilot and airplane designer. Jones flew the course like clockwork, emphasizing the value of precision flying as a race-winning factor. Rodney Kreimendahl, designer of Shoestring, turned out a beautiful design with much attention given to the other race-winning factor - cleanness.

The ship is a high mid-wing with engine fairing following through into the wing fillet - the most desirable arrangement. All flying surfaces are filleted well into the fuselage. The flat-plate Cessna-type landing gear has a generous fairing, and the wheel pants are relatively large, making for good streamlining of the chubby wheels. The bottom of the oil tank is shaped to lie flush with the lower cowling line, and external fins are welded directly to the tank to aid in oil cooling.

A reworked Macauley metal racing prop is used and engine exhaust stacks are pointed rearward for the small advantage gained by jet action of exhaust gases. The overall impression of the airplane can only be described as 'solid'. Proportions, moment arms. and aspect ratios are all sensible, straightforward and honest. Span is 19 ft, length is 17 ft 9 in.

The little speedster has welded steel tube fuselage. stringered and fabric covered. with all-wood plywood covered wing and tail surfaces. Engine fairings, cowl, struts and pants are aluminum. The most outstanding feature of the airplane is the finish. The color scheme is a bright chartreuse and fire-engine red, rubbed down and waxed to the highest gloss seen at the races. You can barely stand to look at the ship in the sunlight!

Modeling Shoestring is a natural for flying scale. The plans presented are scaled directly from accurate three-view drawings supplied by the designer. The odd scale of 1-3/4 in = 1 foot was chosen so the ship would have a reasonable size and wing loading. Every effort was made to keep the construction light so good flight performance would result. Span of the model is 33 in and length 31 in. Wing area is 200 sq in and weight 28 oz, giving a wing loading of 14 oz/100 sq in. With the K&B .32 engine the ship really moves and the symmetrical airfoil permits some stunting, although the ship is not light enough to compete as a pure stunt model. The symmetrical wing is the main departure from scale on the model. Construction details on full-size plans available." 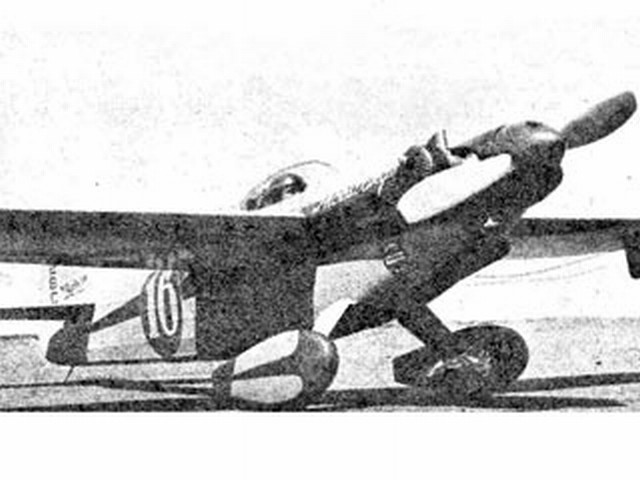