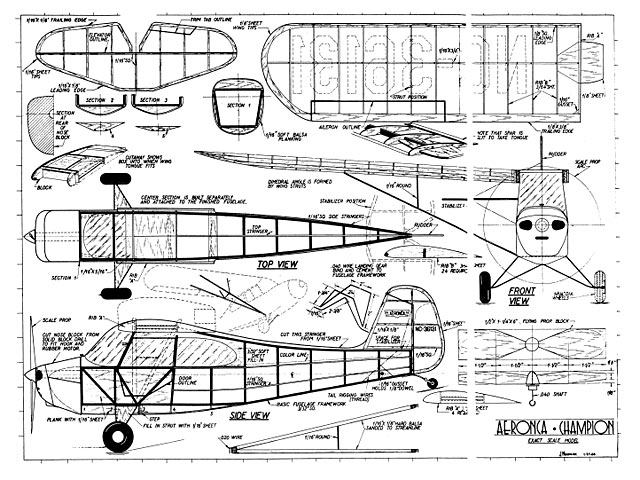 Quote: "Champion by James Noonan. Another in our series of postwar private aircraft. This flying scale version of the Champion is capable of good, sustained flight.

OUR Model is drawn to a span of 30 inches and is exact in every detail, as factory plans were used in its make-up. If you wish, the model can he scaled up to a suitable size for gas model work, built as is for an exact 30 in display or flying scale model, or the prop, landing gear, and stabilizer may be enlarged to make a duration flying scale model.

Light balsa of generous size was used throughout in the construction and weight was concentrated well forward to give, as it turned out, perfect balance for flight in the model shown in the photos. Another feature is the demountable wings which are flicked off in case of hard landings, thus preventing damage. The demountable wings also make it easier to store the model. This idea was picked up while the author was in Europe, where it is universally used on every type of model.

Lay out a drawing to the desired size (wood sizes are given for a 30 inch model), using proportional dividers, if possible. Build two fuselage sides, one on top of the other. Note that the sheet balsa forming the cabin windows is a part of the fuselage sides. Insert the gusset for the rear rubber retaining dowel. Cut the sides apart by inserting a razor blade between them and join them as shown on the top view. In section one, the lower crosspiece is shorter; see plan. Cut and attach the bulkheads, then begin the planking as shown by the shaded areas on the side view. Add stringers on bottom and sides.

Carefully build the center section and cheek to see that the wing tongues fit in the boxes. Cement the center section to the fuselage and add the top stringer (cut from sheet balsa). Carve the nose black to rough shape and drill to allow clearance for the rubber motor..."

Article page, text and pics, thanks to BillW 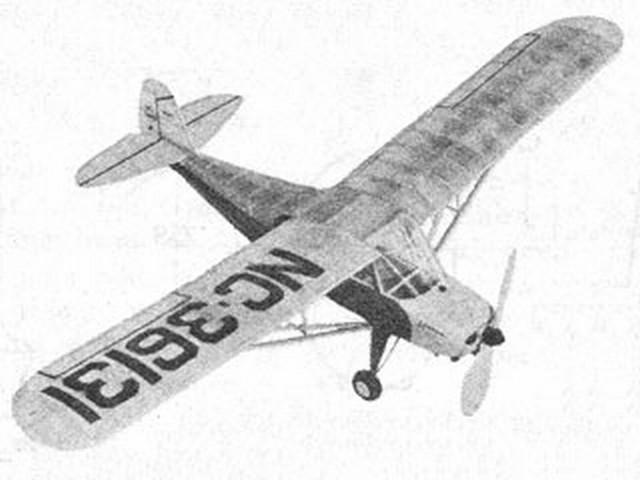