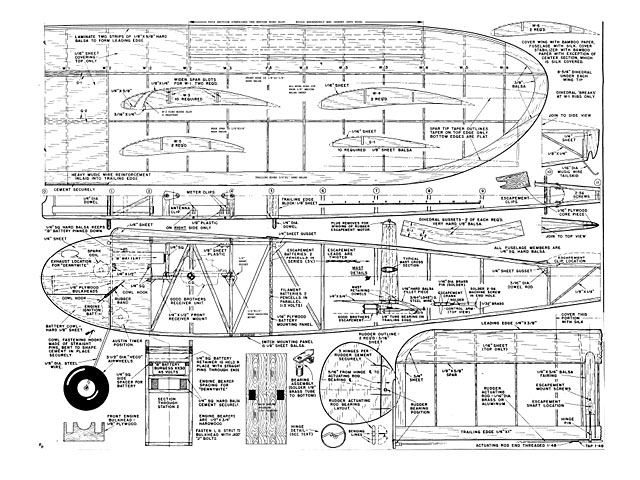 Hoosier Hot-Shot. An early radio control (rudder-only) model. This interesting design includes wing slots as an integral part of the airfoil. Plans from May 1950 Air Trails.

THE history of the average radio control model has been one spiral dive after another. It seems that the design of the average free flight model is not successful for radio control use. We have all seen a first-class free flight job spiral dive from a bad launch or a gust that disturbed its normal flight path; the movement of the rudder by radio is in effect the same.

The design work on the Hoosier Hot-Shot was done by Kenny Ernst of Indianapolis, one of the old-timers with 20 years of proven design experience. This model is unusual in appearance, in that it uses three-quarter span slots and twin rudders. The rudders were employed for two reasons: one to have a practical method of lowering the CLA, the other to get the movable surfaces out of the prop blast.

The average radio model builder has always been cursed by one big trouble in trimming the conventional rudder - with power on, he would get too much turn; with power off, his turn would be too little. The Hot-Shot has a tight turning radius; the difference between power on and power off circles would have to be measured in inches.

The three-quarter span slots were used for two reasons: one to give a greater lift, the second and most important to control the air flow over the panels during a turn. The rest of the design revolves around C. H. Grant's theory of low CLA, high CG, and high thrust line.

An important factor overestimated by many radio control builders is power. We all know that today's free flight models are overpowered. Most beginners in radio control have the mistaken belief it takes more engine than needed for the average free flight to fly a radio job. This is a big mistake. We have successfully flown a five-pound radio job with an Ohlsson 23. To give you an idea of what power is needed, we are using a 14/8 pitch prop on our ship, turning the engine at 3000 rpm. It is our belief that any reliable .29 to .36 engine will fly the model well.

The construction on the Hoosier Hot-Shot is very simple and light, but strong enough- for radio control.

The fuselage is built in conventional manner. Make nose side plates first from 1/4 in sheet medium hard balsa, shaped as shown on the plans. Take one shaped nose piece and lay out the fuselage side, using medium hard 1/4 square balsa. Lay other side directly over top of first to assure they will be the same. Cut main engine bulkhead from 1/8 plywood, spacing engine barrier holes for engine you wish to use. If you must have power, a tank-mount Ohlsson 60 can be easily installed.

Take up the two sides. Glue the front bulkhead in place and fasten the rear of the fuselage together, placing the tail piece between each side as shown on plans.

After the front and rear of the fuselage have dried, fill in the rest of the cross-members in conventional manner. The top cross-members in the radio compartment are all double-strength. The under-cowl is of 1/8 sheet balsa, removable for access to the ignition batteries.

The landing gear is bent from 1/8 steel wire and fastened to firewall with 'J' bolts. The ignition system is mounted forward of the main bulkhead. Before installing the engine, it is suggested that the engine compartment be heavily coated with lacquer or dope to prevent its becoming oil soiled. This is a good practice on any model, but doubly important on the radio control ship because of long engine runs.

The construction of wing and stabilizer is self-explanatory on the plans..." 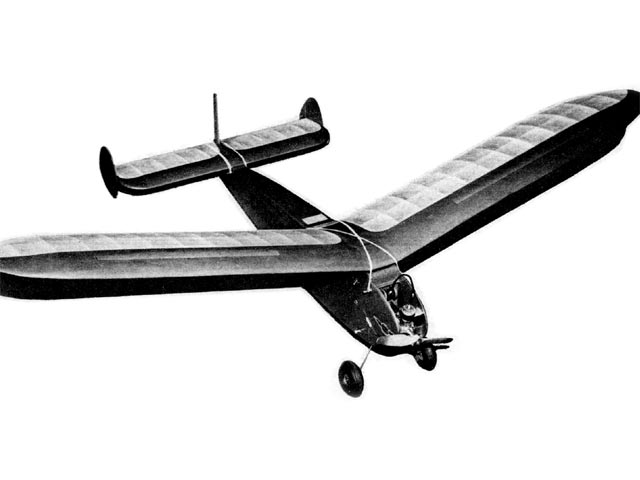