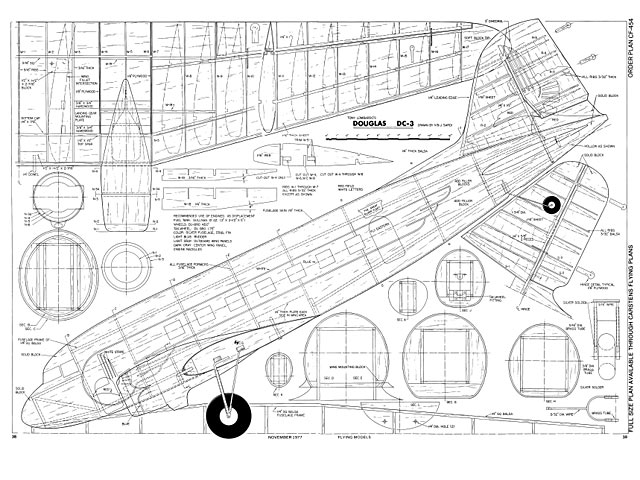 Quote: "Here's a large, slow and gentle airplane that's a twin-builders dream for Stand-Off Scale. All it needs is an eight foot wing, two 45's and all your balsa ...Back in 1959, while on a business trip, I booked a flight on a local airline in the South. That was the only time I had ever flown in a DC-3. Ever since that flight the DC-3 has been tucked away far back in my mind. I thought that 'someday I'll build a flying model of her'. Since I got started in radio control aircraft the desire to attack the project became stronger, but I held off mainly because of the problems I believed I would have with a multi-engined ship. Finally I gained the experience (and the two engines) to start the project. I believe that the larger models are easier to handle, so after some research, which was mainly sizing up my Vega station wagon, I settled on a scale of one inch to the foot, so I would be able to just fit the ship into my diminutive wagon. At this scale the DC-3 model sizes out to 95 inches. Building such a large aircraft is a big job, but planning and designing it can be a task also. With such a large investment in balsa, spruce and engines I wanted to be certain that the ship would be a successful flyer. With this in mind I enlisted the help pof several friends and fellow modelers. Joe and Vincent Sardi enthusiastically agreed to help me develop do drawings as well as research the geometry. Being excellent modelers in their own right, as well as designers at the Grumman Aircraft Company; their help and cooperation resulted in a fine set of plans. Two other Grumman engineers, and fellow Brentwood Airomasters members, agreed to help. Hank Stumph developed the airfoil sections and Frank Dcllamura ran a lift/drag check to determine the ship's potential flying qualities and required engine size. Frank was also of great help in preparing the article and photographs. He was around to help, advise or just be there when I had to bounce an idea off someone in order to think it through. All of this assistance allowed me to concentrate On the task of building and finishing the ship. The project was, therefore, a team effort which greatly reduced the time it would take to build such a model. From the first slice of balsa to the initial flight took seven weeks..." 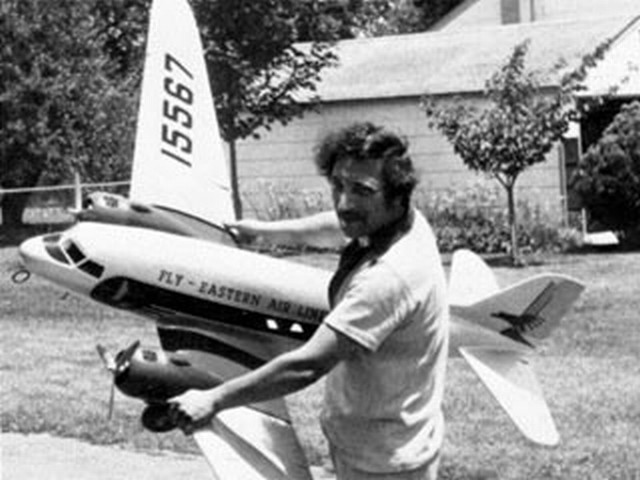