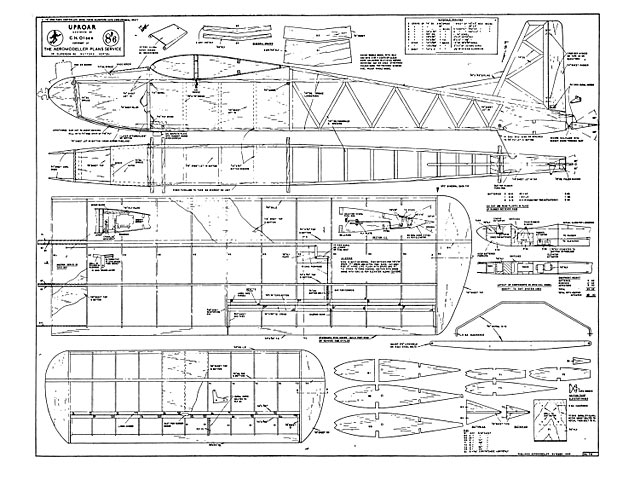 Chris, a 27-year-old Civil Servant in the Scientific Branch, has quite definite ideas on the subject of radio control acrobatic design, which after a four-year development period have resulted in Uproar. He believes in a simple yet strong airframe that is relatively light in weight, this being achieved by spruce longerons with sheet covering only at the nose and radio compartment. He does not advise any beefing-up of the structure as this is quite pointless, merely increasing weight, decreasing performance, and if a crash occurs, then it is the engine and radio which suffer instead of the plane, which is after all cheaper and easier to replace. The airframe can be built in a week and costs approximately £3.

The radial engine mount used is important, as in a crash it gives before the engine and has proved far less prone to vibration than the standard bearer mounting.

The model weighs approximately 5-1/2 pounds with a loading of around 16 ounces per square foot; powered by a Fox 29, or any other good 5 cc glowmotor such as the new ETA Mk VI, it has the necessary reserve of power to produce a high rate of climb carrying 2-1/4 pounds of radio equipment.

The original is flown with Chris Olsen's home-built version of the Orbit 8 channel equipment, using special servos designed around the Mighty Midget electric motor. We shall be giving working drawings of these servos in our next issue and meantime emphasise that neat, careful, and well-supported wiring of the radio and servo equipment is a noticeable feature of the designer's current machines. The resulting reliability of his equipment has un-doubtedly been a major factor in his competition successes and will we hope point a moral to others.

An 18 percent symmetrical airfoil gives a fast flying speed, great manoeuvrability, and first class wind penetration; for as we know, Uproar has a repertoire which includes consecutive loops both outside and inside, consecutive flick rolls, figure eights, split S turns and many others, including the most beautiful true spins we have yet seen.

As originally flown, ailerons were not fitted; the designer has, in fact, only been using them this season and we watched some very pleasing rolls as a result during the R/C Eliminators at Cranfield. It is strongly recommended to those other than experienced multi flyers, that they do without this particular form of control in the first instance until plenty of Uproar experience has been gained. After all, rudder, elevator, and engine control allow plenty of scope which reminds as that Chris fabricates his own version of the Bramco type throttle for the latter form of control, but says that an Ohlsson Gold Seal glowplug of the shrouded element type is essential for satisfactory results when changing to low speed. Finally we mention for the benefit of those who wish to install British commercial equipment, that the fuselage will need widening by half an inch to accommodate the standard ED Reed outfits." 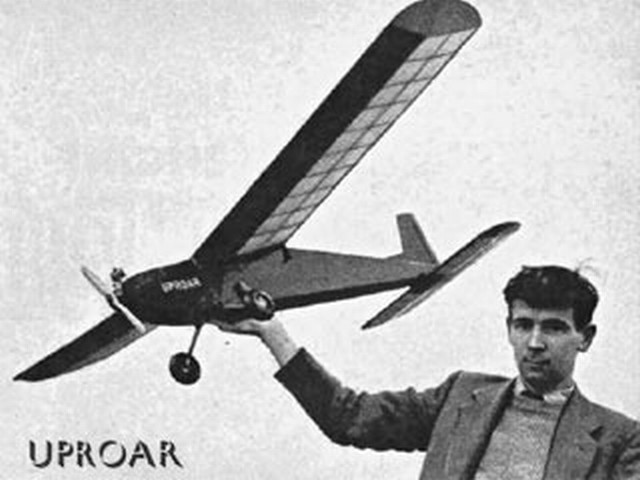 Hi Steve, Just a note to say that is common with many old Aeromodeller plans, the quoted wingspan is wrong. The plan features an aileron wing which if built to plan would give a wingspan of 65 inches. The picture of Chris is of him holding an Uproar which obviously doesn't have ailerons, probably an earlier version. This may well have had a 72" wingspan. Perhaps Chris reduced the wingspan when he went on to ailerons. I'm in the process of repairing my Uproar. This has involved building a complete new starboard wing as well as a few minor repairs. Happy Landings,
DavidDavis - 13/02/2015
Hi Steve, I printed parts of the drawing in scale 100% and got 11 (spaces between ribs each 3in) + tips 3in=36in pr side; total 72in
Karsten - 12/04/2015
Hi again. A plan for a newer version (properly the one Davis is referring to) with 66in span and more strip like aileron can be bought at "Myhobbystore" RC1811 see article in RCM&E April 1996.
Karsten - 18/04/2015
Hi Steve I've just checked with my plan, admittedly not downloaded but bought years ago from My Hobby Store or its predecessor, and my plan has only ten bays so adding the tips will give it a wingspan of about 66 inches. Karsten is right to say that Chris produced an updated Uproar in the 1990s but this model had strip ailerons and a fully sheeted wing. My plan features inset ailerons. It appears that the Uproar plan was available in two versions with different wingspans. Happy Landings. [David also sent us a photo of his Uproar, more pics 003]
DavidDavis - 24/11/2016
Hi Mary - I found these two photos I took of an Uproar built by fellow modeller Phil Williams at RAF Gaydon in 1961 [more pics 004, 005]. The model is definitely a 'Series I' as per oz2220.
ChrisPinn - 28/11/2016
Hi Chris Pinn, Long, long time no hear. Can you all imagine my surprise at realising that that is my Uproar in the photographs 004 and 005, and the joy of hearing from an old friend. No, its not a Mk 1 aircraft, its a Mk 2 from the revised plan of 1961, Chris O made some serious changes to the wing and tailplane structures to reduce the warping tendencies of those surfaces, by introducing full depth main spars of balsa sheet. I know this is correct because that tailplane in the photographs is on the wall behind me as I type, it has a full depth spar, not the unwebbed twin spars of the earlier design. So here we are, some 58 or 9 years down the line, I have the two completed fuselage sides for my new Uproar just along side me. My first one was powered by a new Merco 35, with REP 10channel radio, relays and REP servos. It went like a rocket and scared the hell out of me! Chris P. so good to hear from you, take care now. PREW.
Philip R E Williams - 05/01/2020
Add a comment