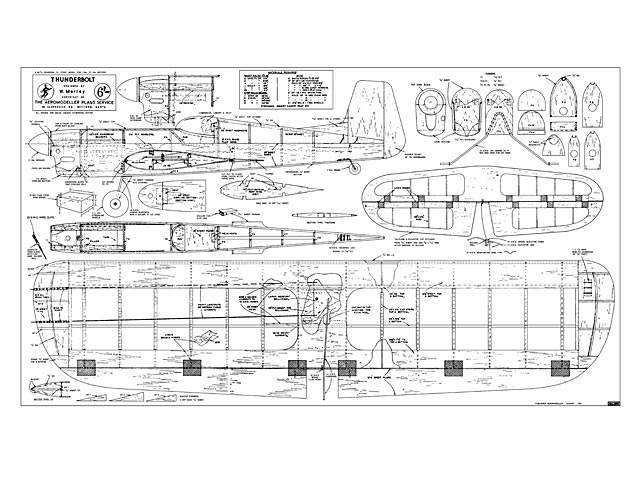 TOWARDS THE END of 1951, Bill Morley decided to produce a stunt model that would incorporate the good looks of a team racer together with the smoothest and most precise possible flying characteristics. It was felt that the average British stunt model at that time was far too small for top-class precision aerobatics, so he thought he would try to forecast the type of model that would be produced during the next few years by then current American trend in stunt design.

That Bill was successful in this is shown in the similarity between Thunderbolt and the designs of Bob Palmer (considered to be the world's leading authority on acrobatic CIL models) such as Smoothie (oz480) and Pow Wow (oz2466), and now Thunderbird (oz6238). The original weighed 24 lb with fuel and prop, but it was built rather heavily. Using suitable wood and finishing carefully, it should be possible to build a Thunderbolt around 28-32 oz. Every expectation regarding handling was fulfilled, the model flying quite slowly and being extremely smooth and rock-steady right through the stunt pattern on 60-65 ft. lines, depending on weather conditions.

Construction is quite orthodox, and presents no particular problem, providing you take your time. Commence with the wing. Pin down the front lower main-spar, to which the ribs are then cemented. Add the front and rear upper main-spars, leading edge and top half of trailing edge while still on plan. After allowing to dry thoroughly, remove wing and cement in the rear low spar and bottom half of trailing edge.

Incidentally, the spars will have to be spliced, so don't forget to stagger the splices. Glue in the 1/8 in sheet webs and the 1/4 in square supports in the centre section, followed by the bellcrank platform. Next fit the bellcrank, stub lead-outs and flap pushrod Leave the latter slightly overlength and don't bend them over yet..."

Update 14/04/2015: Replaced this plan with a clearer copy (patterned background removed), thanks to TonyP.

Quote: "Hi Steve, Another cleaned plan for you, Thunderbolt ID 2219. I've had this one underway for some time, the two parts of the plan needed re-alignment and a lot of redrawing was required. Cheers," 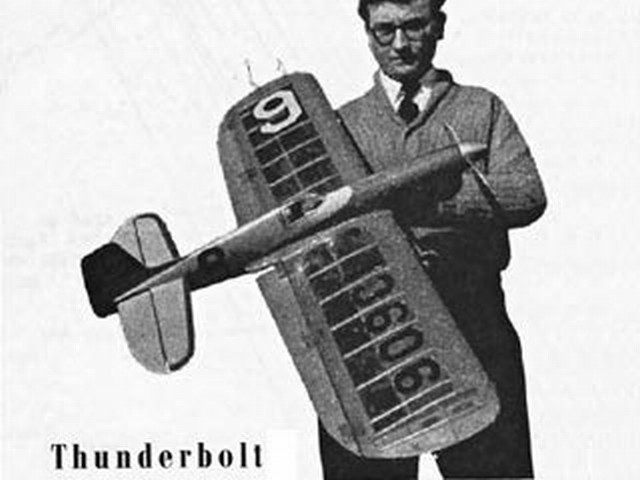