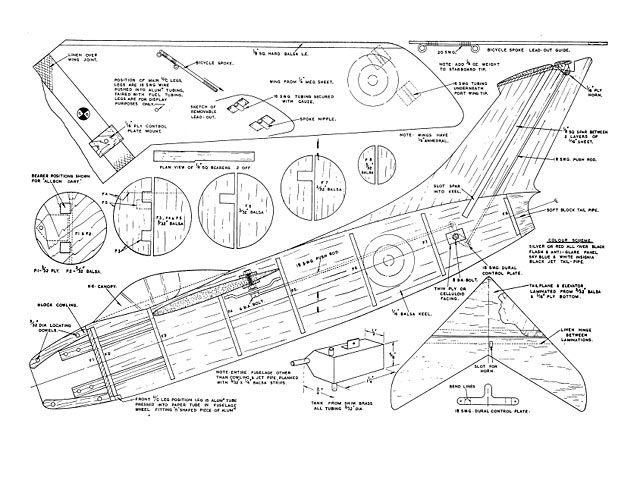 Quote: "A swept-wing jet fighter in miniature for any point - five engine, designed by JP Evans.

THE SWEPT LINES of this Kurt Tank designed fighter for Argentina make an attractive scale control line model for any point-five deisel. Several prototypes of the full-size aircraft have been made and the 'Arrow' is reputed to have a maximum speed of 646 mph with a Rolls Royce Nene engine. We are not going to suggest that you will reach this figure with this small scale model, but you should get up to 40 mph when using 20ft of fine steel lines.

Because of its high tail position the 'Pulqui' presents only one small difficulty in construction and that is the second crank, which is required to transmit movement from the main control plate to the elevator. This should present no real difficulty even to the novice, and to anyone wanting to try their hand at a planked fuselage for the first time, we would suggest that they start with this model.

The fuselage is built upon a vertical keel of 1/16 sheet balsa, cut to the side elevation. The engine bearers are firmly cemented in place on either side of the keel, according to whether you prefer an inboard or outboard cylinder, and a slot is cut in the rear fuselage to take the fin spar. Formers F2–F8 are added on either side of the vertical keel and Fl slipped over the front to secure the bearers and generally strengthen the nose.

Now make up the fin with two layers of 1/16 sheet on either side of the 1/8 sq spar to give a 1/4 in thick symmetrical section. This can now be mounted vertically on to the fuselage keel and then the wing cut from 1/4in sheet. A join will have to be made in the centre section and we suggest that you do this along the centre line and cover the joint with a strapping of tape. Note that there is a 1/4 in downsweep or anhedral at the tips. Now sand to section and add the hard leading edge. Then add the plywood control plate mounts and make up the control plate assembly using 18 gauge Durel bent as shown on the drawing. Fit this to the wing and slide the wing through the fuselage keel, cutting away where necessary to clear the control plate for free movement. Now fit the rear control plate assembly and join with the 18 gauge push rod when both plates are in the 'neutral' position. Fit short 18 gauge lead-out wires to the main control plate to extend 2 in outside the fuselage. A bicycle spoke makes an ideal guide on the port (left) tip.

The tailplane and elevator are made from an upper lamination of 3/32 in balsa and a lower surface of 1/16 ply with the linen tape hinge sandwiched between. Fit the ply horn, assemble the tailplane at its correct angle on the fin and join with the rear push rod..." 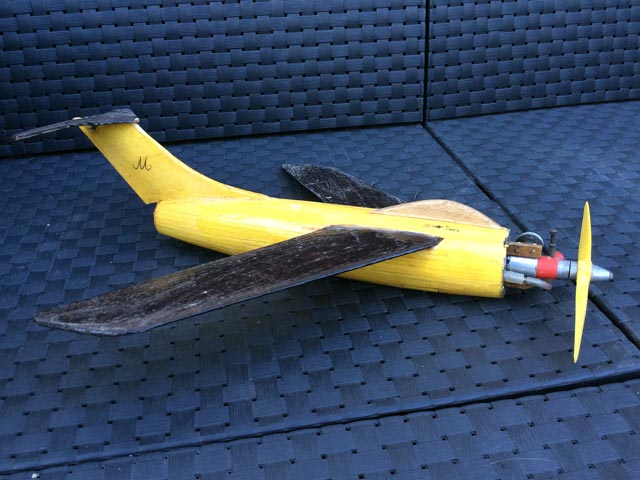