Quote: "Parnall Elf. John Watters offers you this lovely little biplane for CO2 power or conversion to electric or rubber.

Anyone who has been to Old Warden and has visited the splendid display of full size aircraft, cannot fail to have noticed a green and cream 2 seat biplane. Particularly interesting, since this aircraft does not have the normal biplane struts and wires. The aircraft in question is the sole remaining Parnall Elf. Designed by Harold Bolas, the Elf was developed from a series of aircraft to come out of the Parnall factory. It was hoped that this aircraft would fit in with demand for private aircraft ownership in the early thirties. As it transpired only three of this type were ever built.

Unlike the majority of biplanes designed at the same period, the Elf did not have a gravity fed fuel tank, in the upper wing centre section. What it did have, was a pumped system from a tank within the fuselage. This system caused the first two Elves to make forced landings, due to pump failure, resulting in their eventual destruction. The Shuttleworth Elf was purchased by them in 1959 and lovingly restored to full airworthiness, eventually flying again in June 1980.

Having designed and built a number of free flight powered biplanes, the Elf looked a perfect prototype for modelling. Up to now all the models I have designed were intended for outdoor flying. So I thought it would make a change to have a model that could be for both indoor and outdoor. Given the right conditions of course. The Elf is an uncomplicated aircraft and with the Warren girder strut arrangement offers something different in a biplane.

Fuselage: Nothing complicated here. First build two side frames to the shaded outline, including the 1/16 sheet piece for the bottom wing. When both are completed build up the body using 1/16 sq cross pieces and the top and bottom formers. With the built up fuselage structure complete, you can at this stage add the 1/32 sheet sides.

The nose section of the model is made separate from the rest of the body. Formers Fl, F2 & F3 should be positioned onto the bottom nose crutch piece. Former F2 can be pre-drilled to suit your motor. The two 3/32 sheet side pieces can now be attached to the three formers and allowed to set. The complete nose assembly can now be glued onto the body, making sure that it is true. At this stage the front and rear undercarriage wires should be fitted. I used nothing more than masking tape to fix the wires in position. This works well and allows some degree of flexibility.

Having assembled the undercarriage, the bottom of the body can be sheeted and the nose filled-in using sheet and soft block, or even foam. Now, I always think the next stage is one of the trickiest with Cot motors. That is actually fitting the motor. For balance the bottle should be positioned as shown on the plan. How you run the pipes and charger nozzle you will have to decide for yourself. I ended up with the charger being a free assembly, coming out of the rear cockpit. When you are happy with your motor fixing, the top formers can be sheeted over using 1/32 balsa, or again, a foam block.

The motor cowling is a built-up structure, which is probably best constructed on the body. This will allow you to contour the cowling in with the fuselage. All the cooling ducts and exhaust pipe are simply added on pieces of balsa. Although the vents are a bit 'fiddly', they do give the model a realistic appearance.

I used PVA glue for the most part in the construction of this model. Do be sparing with your application, a cocktail stick is ideal for placing a small blob of glue. Weight as we all know with models of this size is a penalty.

Tail & fin: Although the drawing shows the tail and fin with hinged surfaces, it is not necessary, although having them separate can make trimming easier. The actual construction either way does not differ greatly. Both the fin and tailplane use the same method of building. Pin down the centre spars and glue the ribs in place.

The ribs at this stage are simply strips of 1/32 sheet cut to the required length. Adding the leading and trailing edges and positioning them centrally onto the ribs, completes the structure. The outer edges of the fin are built-up from two laminations of 1/32 balsa strips. When completed sand the structure to the profile shown on the plan.

Wings: Both wings are built-up in the same manner. First cut the ribs from 1/32 sheet. If you decide to add the riblets, they should be cut along with the ribs and all sanded to shape together. The plan is self explanatory. There are no dihedral braces between the top centre section and the top wing..." 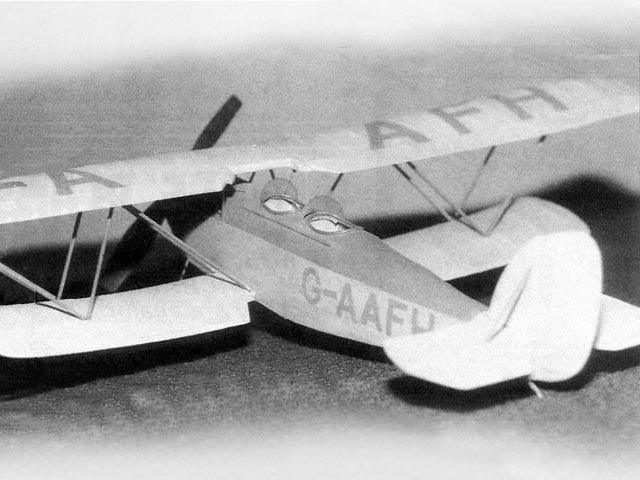