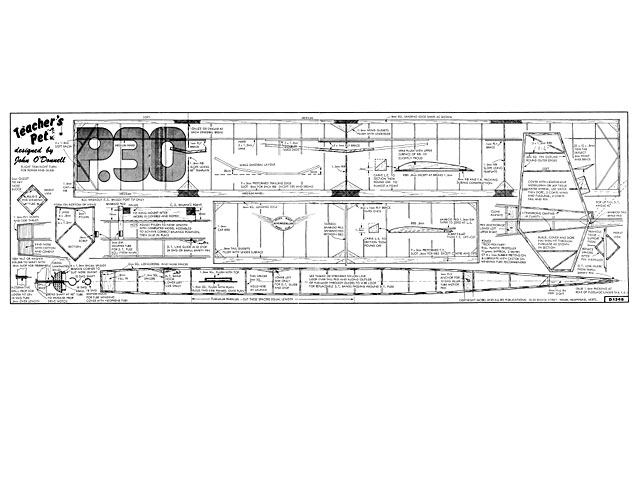 Quote: "THOSE WHO KNOW me through the contest circuit may well be surprised at my producing a design such as this. Perhaps I should reassure them that it is a contest model. However this is not the main reason why Teacher's Pet is appearing as an AeroModeller feature.

Readers of the American model magazines will have realised that, for a year or two, there has been considerable promotion of the P30 concept as a small-field rubber duration class. Essentially the requirements are the use of a commercial plastic propeller, 10g of rubber, and a span and length limit of 30in - hence P30. Note that there are no weight or area restrictions on the model itself.

Last summer the San Diego Orbiteers Club, in conjunc-tion with Model Airplane News announced that they were organising a postal proxy contest for P30 models. These were to be posted (or given direct) to the organisers, who undertook to provide proxies to fly the models at the prescribed time and place. I decided to enter, built a model the week after our Nationals, test flew it on a calm Wednesday morning and had it 'in the post' to the USA by Friday tea-time! Although such a venture is inherently rather hit-or-miss, I was quite pleased with the result - fourth place out of 45 entries. My model was flown by the father and son team of John and Rick Hutchison, who reported that it flew straight 'out of the box' with no readjustments. Although unfamiliar with winding tubes, they nevertheless used the one supplied - and hence survived three broken motors unscathed. For reasons that appear inconsistent with the small field concept, the Americans fly P30 to a 3 minute max - and claim that a treble is still to be recorded. I'm hardly surprised!

Whilst I did little flying with my prototype, I did realise that I had produced far more than I originally expected - both as regards performance and ease of handling and flying. Potential duration appeared well in excess of Coupe d'Hiver at a fraction of the trouble. Obviously the light all-up weight of the P30 more than compensates for the plastic propeller.

I was convinced many years ago that Cd'H was not a beginner's class - despite much being said to the contrary. Unless handled by experts 'Coupes' lack climb - a situation aggravated by indifferent quality rubber. My P30 had an adequate, even zippy, climb with a slow mushy glide. In short, more than enough performance for anyone trying to bridge the gap between small simple kit models and proper contest designs. Moreover the plastic propeller neatly sidestepped all the difficulties associated with carving and folding balsa propellers.

AeroModeller showed immediate interest in the P30 idea, especially in view of its obvious appeal to the younger modeller. The P30 offers real flying without dependence on exotic materials and should present little trouble to anyone who has tried a kit or two. However before jumping into print I thought it prudent to ensure that the design (and if possible, the plan) were thoroughly 'de-bugged' before releasing to the world. My persuading a design to fly well is hardly a guarantee that it will perform for all and sundry. Consequently I asked some of my friends to build pre-production versions to discover errors and omissions - not to mention various things I do automatically and take for granted. My caution was justified and the plans and instructions duly modified; I am confident that the design will fly well for other people.

I would like to express my appreciation of the help thus rendered by Reg Boor, Ian Warman and his son Allan - all of whom not only built models, but did so quickly. Reg even took constructional photos along the way!

The model will fly better if built light - so select your wood with this consideration in mind. On the other hand, making the whole airframe out of the lightest, softest, weakest timber can lead to all sorts of structural troubles. Do not try to save weight on the fuselage longerons or the wing spar! Use decent 1/8 square for the tail LE and the underfin outline. Practically everything else can be pretty soft - especially the tail TE. Another important factor in wood selection is the choosing of stright lengths..." 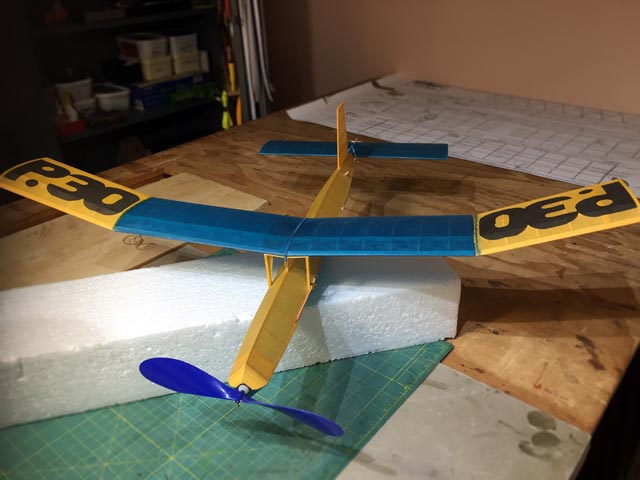