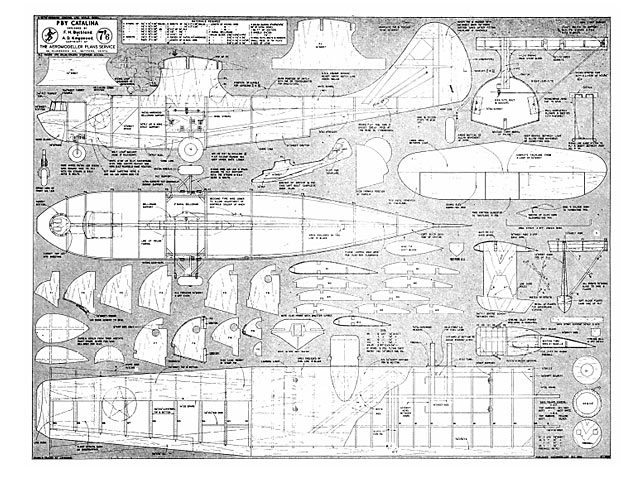 HERE IS A MODEL to delight the scale fan seeking something different, and its gay colour scheme will attract and hold the attention of any 'concours' judge - this we guarantee! This does not imply that the 'Cat' is just for looking at; built as a combination effort by Alan Kingswood and Frank Buckland, the original is now three years old and still rarin' to go.

First power units were AMCO 3.5s, but these were later exchanged for E.D. 2.46s. Not much power for a 63-inch model you say? Look again at the wing area and let us add that this four-and-a-quarter pound beauty has taken off and flown quite happily on ONE of these engines driving an 8 x 8 prop! The tricycle undercarriage makes landings and take-offs a joy - no nose overs here.

The PBY-5, 1938 version, was strictly a flying boat only. It could be distinguished for its curved rudder trailing edge, hatches in the rear fuselage and vivid colouring, as will be seen in the two photos on this page. Making it into an amphibian is rather cheating on scale; but if you happen to be a stickler for accuracy the 'Cansos' as it was known to the RCAF is detailed. This was also the Catalina III in the RAF, and calls for straight rudder trailing edge, undercarriage up or down and massive rear fuselage gun cupolas that have to be moulded from acetate sheet. One need not be drab in colouring such a Mk III, or a straight flying boat Mk II, for Coastal Command camouflage allows a bright matt white finish for all the undersurfaces, and sea grey for the topsides which is a contrast sure to catch the eye. Add to this a nose roundel and individual aircraft code letter of same depth in drab red in front of the struts (Squadron code letters were not used) and the RAF version too calls for many dope colours.

If you really want to be ambitious you can make it a PBY-5 flying boat, for overwater control-lining with tip floats down as detailed and shadow-shaded in green and grey camouflage, with grey undersides and the Red Star of the USSR on the rear fuselage behind the hatches. (No cupolas!)

Airframe numbers for a silver PBY (curved rudder) in RAF markings was P9630, the same number appearing in large black figures under each wing, and a number for a Mk. III would be FP-533, appearing only on the fin root.

Whatever your choice for colouring, the Catalina, Cansos or Dumbo as it was known to Coastal Services throughout World War II, will be a building project worthy of any pair of engines totalling 4 cc or more and is certain to be a favourite with all who have built the successful APS Invader (oz9062)." 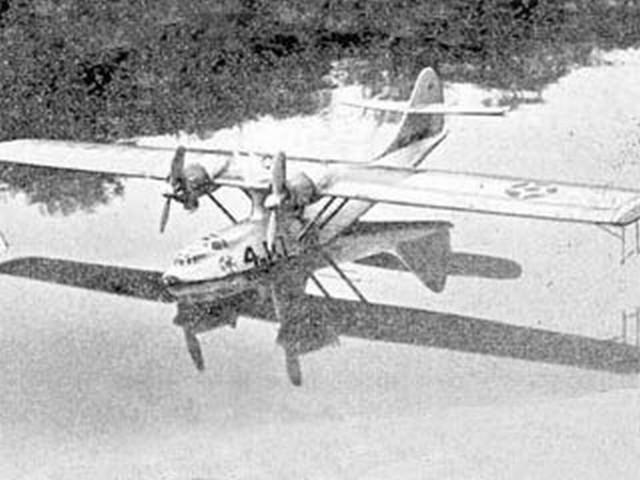