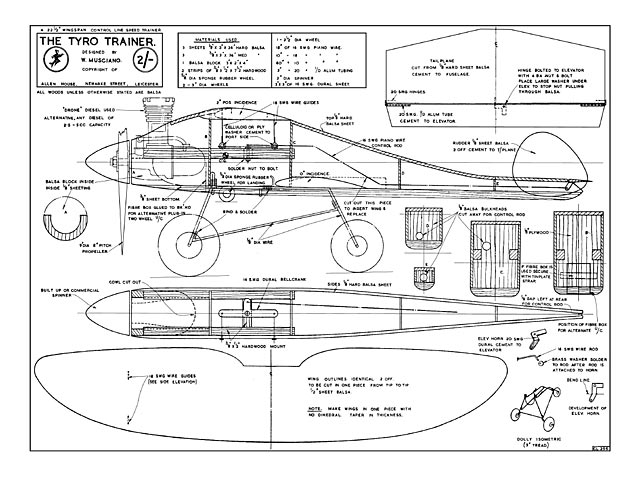 Quote: "Control line speed flying has attracted many new enthusiasts since its conception. Unfortunately, many modellers become discouraged because their attempt proves unsuccessful.

This failure can be attributed to the fact that they have had no training in handling fast ships. Naturally one cannot expect to fly a De Havilland 108 before having flown at least a Miles Master. It was because the author observed numerous incidences where inadequate training was at fault that the 'Tyro Trainer' was designed for his younger cousin and, when the easy handling and fine speed were apparent, the author proceeded to build one for himself!

Primary consideration was given to simplified construction. Anyone familiar with solid models can carve the wings and empennage and no special experience is required for the fuselage. A take-off dolly was used in order to increase the speed and give the modeller experience in flying from these carriages which are used for all speed models. Many speed designs have a low stalling angle but the Tyro Trainer has been power stalled on many occasions and incidentally the flyer derives much satisfaction when performing this manoeuvre. The speed is moderately high, approx 72mph, to make it an excellent transition trainer.

Cut the sides from 1/8 in hard sheet balsa and dement the engine mounts in their proper location. (This will depend on the type of engine used) while this is drying, cut the fuselage bottom of 3/8 stock and the bulkheads of 1/8 in. Cement the bulkheads to the bottom and attach the sides in place. The bellcrank can be assembled on the foundation and this assembly cemented well between the mounts. The nose is carved from a block of balsa in order to form the transition from the rectangular fuselage section to the circular spinner section. This also provides additional strength. The fuselage top is not attached until later but the sponge rubber belly wheel can be attached'at this time.

The tail surfaces are cut from 1/8 hard sheet balsa. Aluminium or other tubing is used as a hinge. This must be well cemented to the elevator. Attach the rudders to the stabiliser before'assembling the elevator. Cut the control horn from aluminium or brass sheet and bend as shown. Connect the 1/16 in. wire control rod to the bellcrank and horn, cutting away the bulkheads where necessary, and then cement the empennage to the fuselage.

Select a straight grained 3/8 in thick piece of medium soft balsa for the wings. Balsa planks the entire chord of the wing will be difficult and expensive to obtain, therefore, two narrow pieces cemented together span wise under pressure will prove satisfactory. Both wings are identical. The platform is cut first with a coping saw and then carved to the correct airfoil section. When sanded complete, a coat of clear dope and a light sanding will prepare it for assembly. Because of the fact that the root chord is less than the maximum chord, a rectangle must be cut out of the fuselage side to install the lower wing: This need not be larger than the maximum chord and thickness of the wing. The lower wing is inserted and cemented well to the bulk-head, fuselage side, and bottom through the open fuselage top. When dry, the rectangles may be replaced with space removed to accommodate the wing root. Cement the upper wing in place and cover the fuselage top with 1/8 sheet balsa.

For the beginner who is fearful of wrecking his creation, two coats of clear dope and three of coloured will present an attractive appearance. The experienced flyer should endeavour to polish the model using wood filler before and rubbing compound after the application of the colour.

The take-off dolly is conventional in design and simple to construct. Bend the 1/8 in wire to shape and wrap all joints with soft fine wire and solder well. The wheels can be solid rubber at least 3 in in diameter. Large wheels perform better than smaller ones. Portions of the dolly that come in contact with the model can be wrapped with tape to prevent scratching.

The original model was powered with a Drone Bee diesel engine developed by Mr Leon Shulman. Other models have used power plants from a "(Bantam)" 19 in. to a Mighty Midget .45 the former operating without electric ignition using a 'glow plug' and special fuel.

Regardless of the power plant, the model should balance 3/8 in behind the front control wire. The author disapproves the use of 'shot lockers' or other methods of adding useless ballast unless it is unavoidable. Instead, the modeller should decide on the power plant he will use and construct the model accordingly.

Considerable power should be used on the test flights in order to avoid 'mushing'. Flight lines about 45 feet long of .014 in stranded stainless steel wire have been used successfully. The model should be lifted gently from the dolly in about one lap. Do not try to climb into the wind and be sure to maintain tension in the lines. Loss of tension means loss of control. If this does occur a step or two to the rear should prove a remedy."

Update 08/06/2015: Replaced this plan with a cleaner version (patterned background removed), thanks to TonyP. 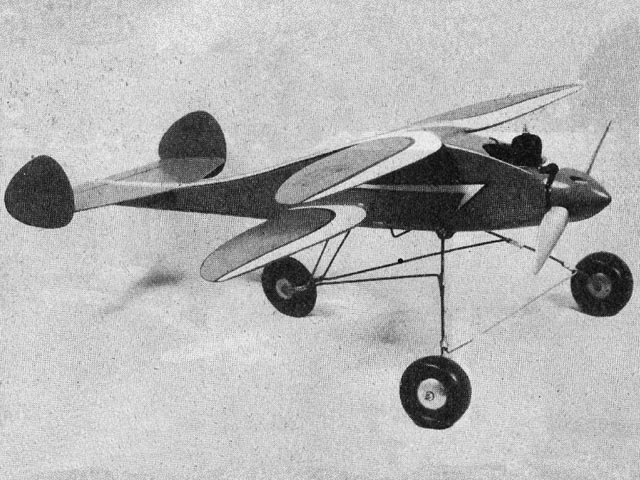