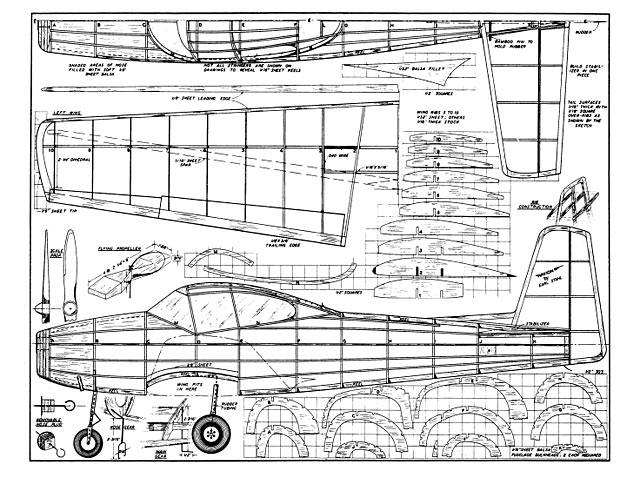 Quote: "In the belief that the currently popular small, light aircraft are not the answer to the much talked about 'family plane' problem, a number of manufacturers are bending their efforts towards the production of larger, speedier craft that are not too tricky for the non-professional pilot to fly. Such a plane is the Mustang-like Navion now rolling off the assembly lines of North American Avia­tion's factory.

With seats for four and a range of more than six hundred miles, it more nearly approaches the utility of an automobile. Further to bring it more nearly on a par with a car, appearance and comfort of the cabin have been carefully considered. The similarity ends, though, when speed enters the picture, for the Navion's effortless cruising straight to its destination at 150 miles per hour outdistances the tortoise-like car slowed by hills, curves, and traffic beyond fair comparison.

Those who have flown the ship say it handles well and is safe in the hands of the average sportsman pilot. Sturdy all metal construction, based on experience gleaned from fabrication of the AT-6 Texan and the P-51 Mustang is featured. A tricycle, retracting landing gear is employed for better take-offs and landings and to improve the taxiing characteristics on airports. All in all, the Navion marks a forward step in safety for planes of this class.

With all these desirable characteristics it would seem that every family should have on order a Navion or a competitive Beech Bonanza, Stinson Voyager, or Republic Seabee. Yet the fact remains that the prices of these craft, ranging from more than five thousand dollars for the Voyager to nearly eight thousand for the Bonanza, are equal to that of a modest home and is simply beyond the reach of all but a comparative few. So until such time as efficiency of production dips the costs to the level of a good car, most of the planes will go to airport operators, companies that can employ them in the conduct of their business, and a few of moderate means. The rest of us will continue to wedge ourselves into the small, noisy, drafty cabins of our 'putt-putts' to bob along the airways at a hundred miles per or less - if, indeed, we are flying at all.

From the standpoint of a model, however, the financial angle is not so discouraging, since for a dollar or so and a few hours of labor (or fun) a snappy appearing, high flying replica can be had. We have been building flying scale models of all kinds for nearly a decade and can say that the Navion is one of the best we have ever had. Designed from drawings supplied by North American, the model captures the eye appeal of the prototype, yet it is a real flyer showing remarkable power and stability as it climbs in wide circles and then floats back to earth in a smooth glide. Generally, the craft is scale (proportions, dihedral, etc); however, our experience has shown that adjustment of incidence of the flying surfaces is required to get really good results; we have made these minor changes in the interests of top performance.

The construction sequence is outlined briefly and no difficulty should be experienced if drawings are studied and text is read before starting. Balsa wood is used throughout and colorless model plane cement is the adhesive. Work carefully to reap the reward of keener appearance and finer flights.

Construction is logically begun with the fuselage. The structure featured is light and strong, yet easily made. It consists of four keels (top, bottom, and two side) cut to the outline shapes shown; to these bulkheads and stringers are attached. To accomplish the job, first cut all parts from medium grade sheet stock. Then pin the top and bottom keels to place over the side view and cement half of the bulkheads and one of the keels to place. Now lift the structure from the jig and place the remaining parts. Stringers are hard 1/16 sq strips added to respective positions on each side at the same time to preserve the alignment..." 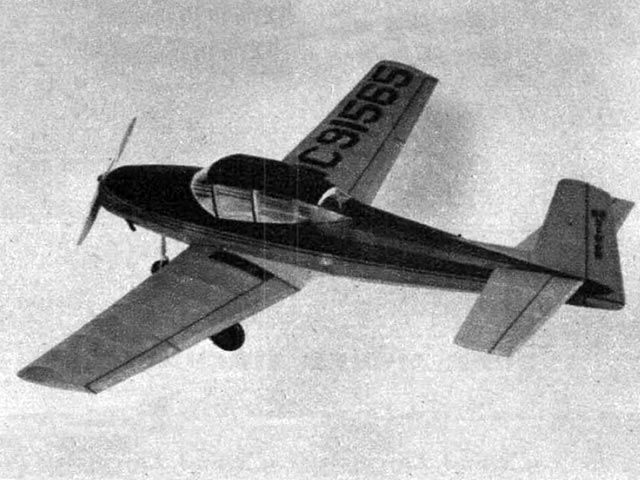