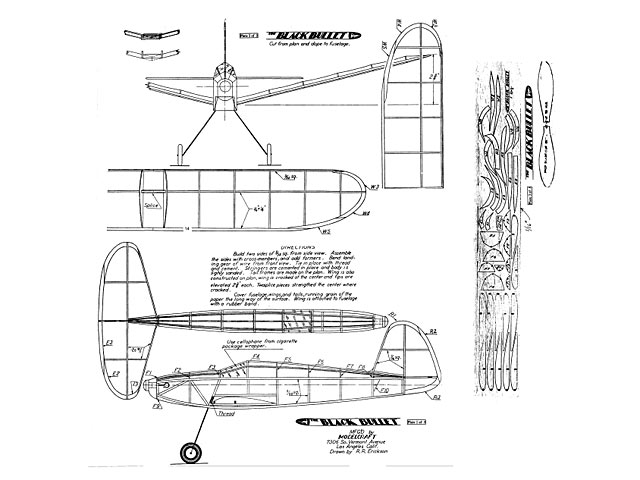 Update 17/04/2014: Added supplement file with CAD redrawn ribs and formers, thanks to Allessandro.

Quote: "I am not sure if it may be useful or not, but I redraw the printwod for clarity and for a more optimized use of a 10cm balsa sheet. Feel free to post it if you think it may be useful. Cheers!" 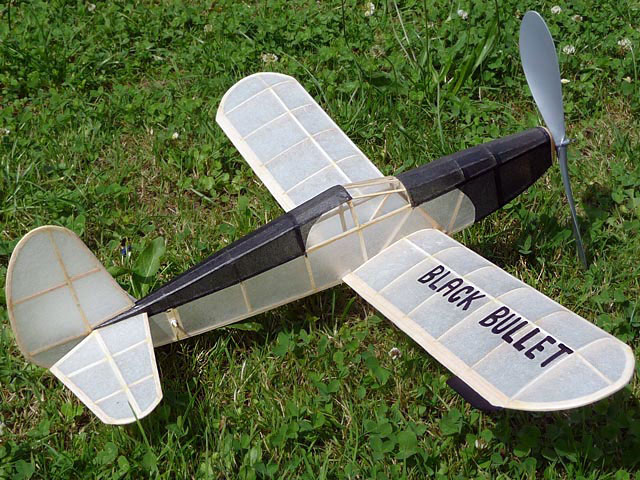 Pic of his completed model Black Bullet is thanks to ZdenekHamr [model photo].
SteveWMD - 20/02/2013
My last project Steve, this 30in Black Bullet [see more pics 003-006]. It flies very nice too, people like too much. It's a really good Pacific Ace brother! Have a nice day!
MarcoAGuillermo - 20/11/2013
I really liked how the Fuselage came out. I substituted 1/16" square basswood for the 3/32"square balsa. It might have added a bit of weight, but the results are worth it I think. The tail came out ok - I recommend building the horizontal in two halves - it'll make it easier overall. The wing, however, is entirely a different story. According to the plans, one wing half only has 5 ribs, the other has 6. The rib spacing of each wing half is different! That, and the short rib out towards the wingtip is in two DRASTICALLY different spots from left to right. I'd recommend just flipping the plans over and building the halves that way, other wise it comes out like a complete nightmare. Maybe I'm missing something? Still a REALLY sharp looking bird, though! I LOVE THIS SITE!
DavidStanley - 21/02/2018
Appears the prior commenter interpreted the vertical wing as printed as complete and the bottom rib as the root rib. That is not the case, the vertical wing panel with its five ribs is to be joined to the horizontal wing print on the far left. Once that is done, each wing panel has six ribs and is the mirror image of the other. Rib spacing also seems to match. Sometimes a variation shows up when printing. The Black Bullet is on my build list; finishing a Pacific Ace right now.
BillH - 22/02/2018
I'm building a 20 inch Black Bullet from plans downloaded from Outerzone. It's coming along very nice! Does anyone have a recommendation for a prop on the Black Bullet 20? I'm thinking about Peck Polymer 6 inch or 7 inch. Would sure like to hear other builders experience on this. Thanks!
DeeWaldron - 16/05/2018
Add a comment