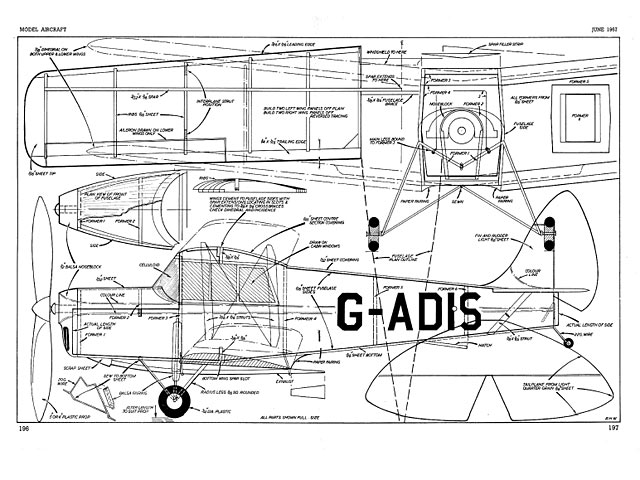 CONTRARY to popular belief, bi-plane models fly quite well and so for this month's flying scale model we have chosen the de Havilland Hornet Moth. This was a popular pre-war two-seat cabin biplane, which first flew in 1934. The original Hornet Moth I (the DH.87A) had sharply tapered elliptic wing tips, with a span of 32 ft 7 in. The wings were subsequently re-designed with square tips and the span reduced to 31 ft 11 in, with improvements in handling qualities and stability. This version was known as the Hornet Moth II (DH.87B). Other small detail differences were included in the Mark II - undercarriage fixing slightly revised, tailplane position lowered - which was also produced as a twin-float seaplane version. Our model, which spans 16-3/4 in, is of the Hornet Moth II, and a few are still flying.

The Hornet Moth had side-by-side seating in the cabin, with dual controls. Engine was the 130 hp Gipsy-Major, which gave it a top speed of about 125 mph and a cruising speed of just over 100 mph. Range was 620 miles.

The fuselage was a wooden box structure with internal longerons and external formers carrying stringers, with fabric covering overall. Wings were of two-spar construction with a ply-wood covered leading edge and again fabric covering overall. The wings, incidentally, could be folded by lifting up trailing edge flaps, unpinning the front spars from their attachment points, and folding the wings back alongside the fuselage. The tailplane consisted of a fabric covered wooden frame but the fin was ply covered.

The model follows similar construc-tion to the previous models in this series. The tail surface areas have been increased slightly from scale, but otherwise the outline follows that of the full size aircraft. The tailplane, as drawn, is about the minimum size required for satisfactory flying and could be increased in area still more, if you prefer. With the given size however the scale appearance of the complete model is retained.

Start by cutting out the six fuselage formers from medium hard 1/16 in sheet and the two sides from very light sheet. Note that the actual length of the sides is slightly longer than the plan view length of the fuselage drawing, this to allow for the curvature of the sides in plan view. Slots to be cut in the sides before assembling are: slot to take former 2; slot to take the 1/8 x 3/16 cross braces (top and bottom of the cabin); slot to take the wing mainspars (alongside the slots for the braces).

The two sides are assembled on formers 3 and 4, curving to the shape of the sides and holding in place with pins until set. The two fuselage ends can then be joined and formers 5 and 6 inserted. Check that the curve is the same on the two sides. The front of the fuselage can then be joined with former 1, cementing in former 2 to assist in maintaining the correct top curve. The bottom of the front sides pulls in more sharply, but this will follow natur-ally if former 2 is properly located.

Bend the main undercarriage legs and thread through holes pierced in the sides. Then sew to former 3 with cotton and cement well (if you prefer, you can bind the legs to former 3 first and then assemble the sides). Now cement the bottom sheeting in place. When set, trim off flush and round slightly with sandpaper. The front undercarriage legs are then sewn to the bottom with a needle and cotton. Cement this binding for added strength.

The fuselage is then completed by adding the cowling, rear top decking and the centre section covering. It is best to cut and fit the tailplane before adding the top decking sheet as this can then be fitted flush up to the tailplane. The noseblock can also be rough shaped and cemented in place, finishing to blend with the fuselage lines when set.

The wing panels are built up over the plan. Two off the plan drawing are required for the top and bottom left wings. Then make a tracing of the plan, reverse, and build two right wing panels. Construction is quite straightforward, but the ribs should be notched into the trailing edge for added strength. Tips are 1/16 sheet, sanded to shape after assembly..." 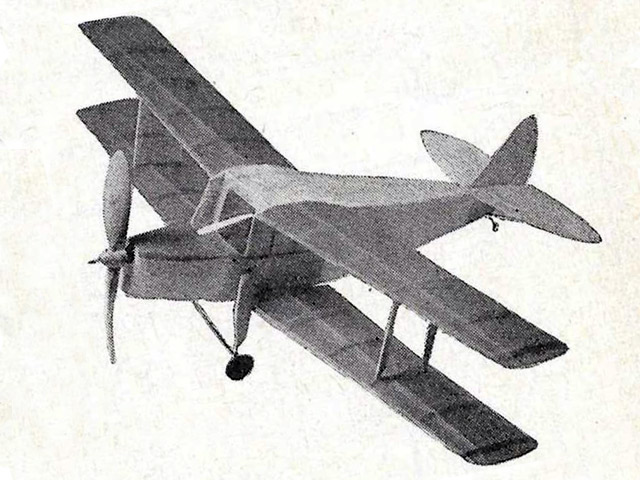