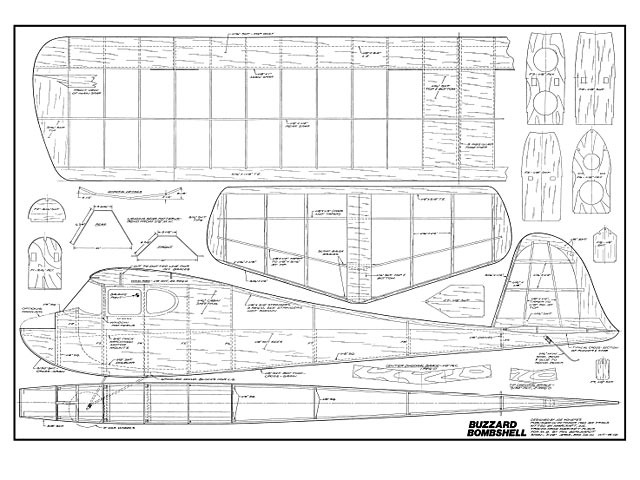 Designed by Joe Konefes, the Buzzard Bombshell (oz5360) was originally published in Air Trails, Oct 1940. Then kitted by Maircraft Inc. This here is a later tracing from Maircraft plans for MB in 1975, by Phil Bernhardt.

The Buzzard Bombshell has become such a common sight at Old Timer contests in the past couple of years that we simply felt there was no need to offer plans for it. However, requests keep coming in, so why fight it? Based on its popularity, we've also decided to offer the very handy Stick 'em Patterns. You'll find full particulars on page 88.

Although it had already begun to make a name for itself in local Mid-West contests, Joe Konefes' Buzzard Bombshell really came on strong at the great 1940 Nationals in Chicago. Incidentally, the 1940 Nationals had 1400 entries, and there were no control line events (Stanzel's G Line models were the only manufactured model airplanes available with a string attached), and only a few radio controlled models - everything else was free flight gas, rubber, and glider. The Bombshell design took 1st, 3rd, and 5th in Class C, with Joe's own model appropriately taking first on the strength of a tremendous single flight of 49 minutes and 40 seconds, all within the bounds of the flying site!

The BB was an anachronism in design trends. Starting with Carl Goldberg's Zipper in 1937, gas powered competition models had begun to look less and less like an airplane; with almost no nose moment, wings propped up on tall pylons, and pencil-like fuselages supporting huge stabs. For at least a brief moment in history, Joe turned the trend around with the Bombshell. Here was (and still is) a model that the non-modeling public could recognize as an airplane; a fuselage with cabin and windows, a wing sitting on top of that fuselage, tail surfaces in normal position, and a two wheel landing gear. And from the everyday modeler's point of view, it was some- thing anyone could build - sheet sides, bulkheads, stringers, constant chord wing, lots of room and access for ignition system.

All original Bombshells were balanced at one third of the wing chord from the leading edge. Glide was corrected with elevator trim. Three washers (under rear engine lugs) of downthrust and three degrees of left thrust were used to produce a solid left climb under power, with rudder set for a right turn in the glide. A Brown B and 14 inch prop were used on the original model." 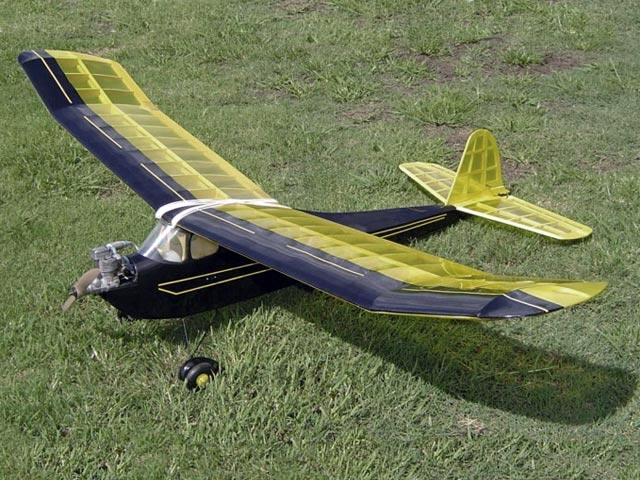 Colour photo of his completed Buzzard Bombshell is thanks to RexAnderson [model photo]. Quote: "This is a photo of my Buzzard Bombshell, it is powered by a Saito 50 FS."
SteveWMD - 14/11/2012
G'day Steve, I noticed a picture of my Buzzard on your web site. The plane looks great, thank you. Thought you may be interested in its little sister [see more pics 003, 004]. Same plane but 50% and electric powered. By the way, the site looks great and is very helpful. Cheers,
Garry - 06/05/2013
Dear Sir/Madam, herewith sending a photo of Buzzard Bombshell, plan no oz 2189 [more pics 005]. Constructed with Assam wood sticks, ribs of 2mm ply wing covered with plastic wrapping film and ironed. Decoration by vinyl sheet.
DrDineshKittur_India - 05/05/2020
Add a comment