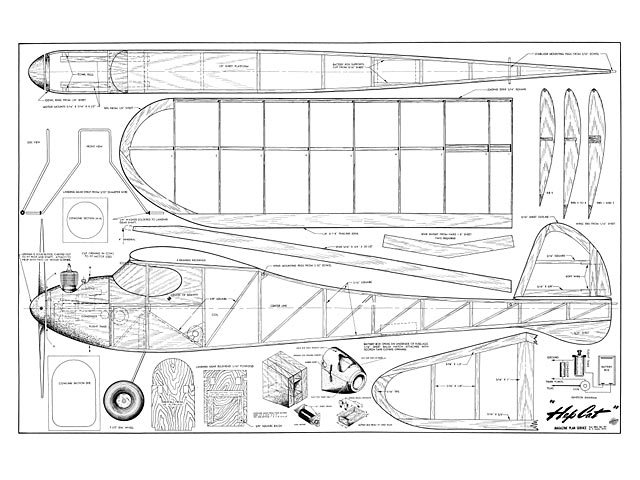 Quote: "Hepcat revisited. Jim Woodside renews acquaintance with a favourite model from his youth - but this time for spark-ignition free-flight.

Hepcat, Paul Plecan's 1930s vintage classic, was the first ever model I built for R/C, using two channels and a rather poorly performing reproduction Mills 1.3. Changing the motor for a PAW 1.5 gave, if anything, an embarrassment of power but helped me on the way to the rudiments of control. Long after its sale I remained charmed by the lines of the model, so when I was looking around for a design to give employment to a small spark-ignition motor, actually a Bantam 19, the Hepcat was chosen. Ben Buckle Kits have had this design on their books for many years and it was this route that was chosen to build a large 48-inch span free-flight model.

Building: Construction of the model is simple and straightforward. Apart from some formers, the fuselage is made of 1/4 in square strip, using the time-honoured method of building two identical sides that are later joined using the formers and cross-members. Really it is no more complex or time-consuming than a rubber design.

Some accommodations were built-in to the fuselage at this stage: the engine bearers were set at the maximum possible spacing in order that a Paxolin engine mounting plate could be used (mostly to give some crash protection to a valuable motor) and some access hatches provided in the fuselage underside so that coil and flight batteries could be installed. Spark motors are stopped in flight by cutting off the flow of electricity from the flight batteries (three AA NiCads) to the coil. In my case this was done by passing the power cables through a lever-operated micro-switch, which can be turned to the off position by the pressure from the disc of an adapted Tatone F/F timer.

The wings are equally as easy, being built around a single substantial main spar. Tail and fin are basic outline structures joined by some of the strip material from the fuselage. A positive adjustment for the fin was arranged by using an R/C kwiklink and a captive pushrod (see photo). Rails glued to the underside of the tail ensure that the fin is always in the same position, hence repeatable flight patterns should be the norm. (see photo). The basic model structure can be completed up to the covering stage in a few hours, thanks to the wonder of cyano glue. All the various holes for wiring route-ways are made at this stage, as well as fitting the timer and checking for reliable functioning.

Covering and finishing Time for covering and deciding on the material to use. 'Tex' type material was disregarded on weight grounds (too high for a purely F/F model), as was tissue (lack of strength/proneness to damage unless applied over Mylar). I have always admired the appearance of large vintage models covered in transparent plastic film - a popular choice in the USA and Australia. The literature accompanying the German-made Profilm Light states that it is proof against petrol, so I bought some transparent yellow to cover the 'Hepcat'. Traditionalists may be disapproving but I am pleased by the outcome, especially the effect of sunlight through the model as it flies around on a calm summer day.

In use, Profilm proved easy to handle as it could be persuaded to follow complex shapes such as wing tips without having to cut or patch. Shrink was good, giving a pleasing tissue-like ping when flicked with a fingertip. And, indeed, Profilm has proved to be unaffected by contact with petrol. Later, I tried out Profilm on a diesel-powered 'Quiver' for two-channel R/C - hours of flying have had no effect on the quality of the covering.

Flying sparks: Some years back, a friend gave me a copy of Floyd E Carter's article 'A Look at Ignition Systems for Model Engines' from the American magazine Strictly IC (June/July 1991). A circuit shown in the article is designed to replace the usual capacitor and act as an amplifier, reducing the negative effects of point pitting, oily contacts, etc. The schematic version of the circuit is reproduced here. NB This needs to be transposed into a circuit board - something done successfully by my brainy friend, Phil Owens. Sadly, I am not aware of any commercially-made versions of this little wonder device but, if you have an electronics expert on hand, they should be able to sort out the actual circuit. The components cost only a couple of pounds.

In my model it makes starts as easy as a good glow motor and completely dispenses with the need for booster batteries. The amplifier board can be seen hanging inside the cabin, weighing only a few grams and the size of a ten-pence piece (see photo).

Airborne: The model was finished in the Spring of 2001 and its first outing was to have been at the British Nationals of that year. My arrival at the open acres of Barkston Heath also coincided with torrents of rain and heavy thunder. Lack of opportunity and space meant that another year went by waiting for the next visit to Grantham. This time, the weather played ball and after a couple of nerve-wracking hand-launches to test the glide, the engine was cranked up and low revs set for about a ten second engine run. All was okay. As the power was built up it was necessary to dial in some right turn using the rudder to counteract the torque of the motor - as this was built in, adjustments were easy to make.

Flying a large F/F model is very different from the usual small 0.5/0.75 cc-powered cabin design. First, the hand-launches need a fair amount of speed prior to letting go. It is not a pretty sight to witness a portly gent (me) trying to get up a gallop! The models weigh more and there is a potential for damage, so do check that all the rigging angles, CG and the like are as indicated before commencing test glides. As it happened, all was well and powered flights followed the usual pattern of gradually increased revs, alongside of any trim as might be needed. On the plus side, the heavier, larger model does seem to have a more stately presence in the air, which is a delight to the builder.

Vintage models powered by spark-ignition motors are not a commonplace and other modellers are instantly attracted to the distinctive note of a `sparker. Of course, large petrol motors are in normal usage by the big scale brigade but it is a source of interest to modellers of all persuasion to see how we once were.

Old spark motors are not particularly rare and can often be seen for sale at the bigger swap meets. A 19/23 makes a nice size as their modest power output matches a model of around four feet and weighing around 25 ounces all up. Perhaps you might fancy a go at vintage spark-ignition. If not, remember that a diesel like the Mills 1.3 will fly any of the F/F models around 48 inch. Good luck with your venture." 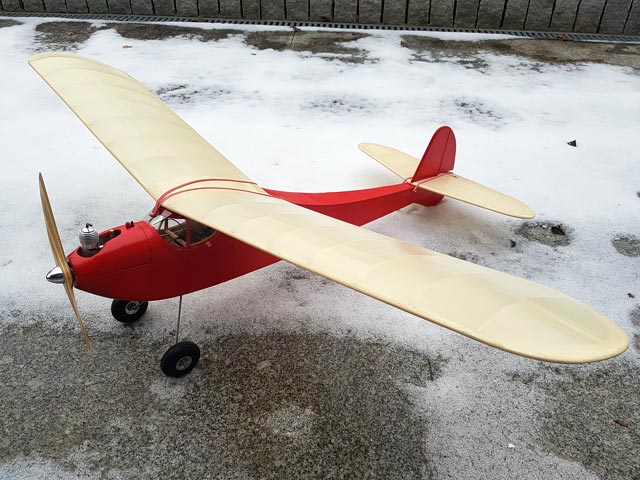 Pics of my recently finished Hep Cat powered with a MP Jet Diesel [mainpic, 003].
DieterF - 03/02/2021
This is a fact: Hep Cat was published in Air Trails in October 1944, and the plan was attributed to Charles Guarnieri. So, who was Charles Guarnieri? Bill Winter had used an alias of John Sprague on some of his plans published in Air Trails in the early 1940s (see Old Square Sides oz3140, and Quickie oz5754). Was Charles Guarnieri an alias used by Paul Plecan?
AaronKV - 18/04/2021
Good question. Anyone know more about this?
SteveWMD - 19/04/2021
Add a comment