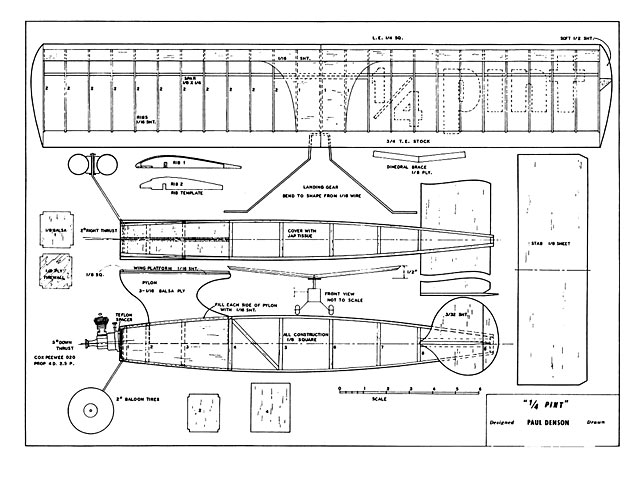 Quote: "No matter how you launch this shrunken old-timer, it gets into a right spiral climb followed by a long easy glide. Quarter Pint, by Paul Denson.

While looking for ideas for a sport plane, I recently ran across the article 'Famous Free Flights' in the 1964 American Modeler Annual - a concise history book, full of ideas for sport free flight. I first considered Goldberg's Zipper (oz387), but the thought of covering those elliptical wings with tissue caused me to turn pale. Then I saw Lou Garami's Half Pint (oz197) and those lines punched my aesthetic button. Using what I could see from the small side view, I made the original drawings for Quarter Pint. Since it uses a 1/4A engine, what name could be more appropriate than Quarter Pint? However, considering the proposed change from the English to the Metric system, I thought I might call it .125 Liters (1/4 pint in the Metric system), but someone might have thought I was talking about the displacement of a foreign sports car.

Quarter Pint is not intended to be an exact replica of the Half Pint. It was originally designed as an RC single-channel RO, but I found cramming all that gear into a plane this small to be quite a headache. After watching it fly, I was glad I decided to eliminate the RC gear and make it free flight.

I started with a side view of the fuselage and made it square rather than diamond shape for ease of construction. By rummaging through the extra wings that always seem to survive the crashes, I found the top wing of a bipe that had been built some time previously. This gave me the dimensions for the pylon; from there. it just naturally fell together.

A hypodermic syringe is useful for putting about one cc of fuel into the tank. Crank it up using a 4D-2.5P Cox .02 prop and fling it away in any direction - into the wind is usually best. It flies straight out about 30 to 40 ft, gains speed, then climbs up as if it is going to loop. On top of the loop, it rolls out into a steep right-hand turn and climbs until it runs out of fuel. At this point, it makes a transition to a large left-hand circle and floats flat-out much like a Nordic glider.

I have never used a dethermalizer, because the motor run has been so short that it never gets high enough to catch a thermal. (I know, famous last words. I heard of a fellow who lost a plane OOS at 35 min on a test glide!) The fuselage could be left uncovered just above the stab and the top longerons used as it stop for a pop-up stab dethermalizer.

Construction: The construction is straightforward and should pose no problems even to the beginner. The wing is built flat in one piece, leaving the two center ribs unglued. Put the bottom sheeting down first and build on it. The leading edge, spar and trailing edge can be cut in half, beveled slightly, and one tip elevated three in. Glue the wing halves together using a piece of 3/8 x 1/16 ply laminated to the spar to make a strong dihedral joint. Cover the top of the wing with 1/16 sheet balsa, and add the wing tips made from soft 1/2 in balsa. It is now ready to be sanded and covered. The rudders and stab are cut from appropriate thickness of sheet balsa, sanded, assembled and covered with tissue.

The fuselage is made over the plans in the standard manner. Be sure to insert the blind mounting nuts for the engine before sandwiching the landing gear wire between the firewall and former No1. Former No1 is drilled with 1/16 holes and the landing gear wire is sewn to it with heavy thread or soft wire. When sandwiching these two pieces together, use two-part epoxy glue. After finishing the 1/8th square construction of the fuselage, fill in between formers 1, 2, 3 and 4 with 1/16 sheet balsa on the sides and the bottom.

The pylon is laminated from three pieces of 1/16 medium hard balsa and is glued in place between formers 2 and 4. It is braced by filling in on each side with 1/16 sheet..." 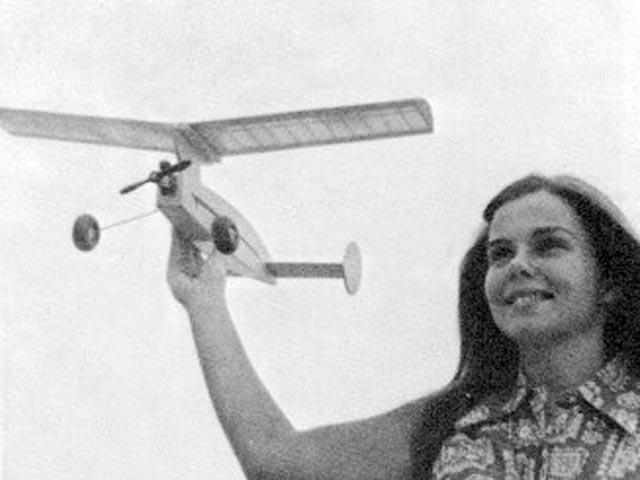