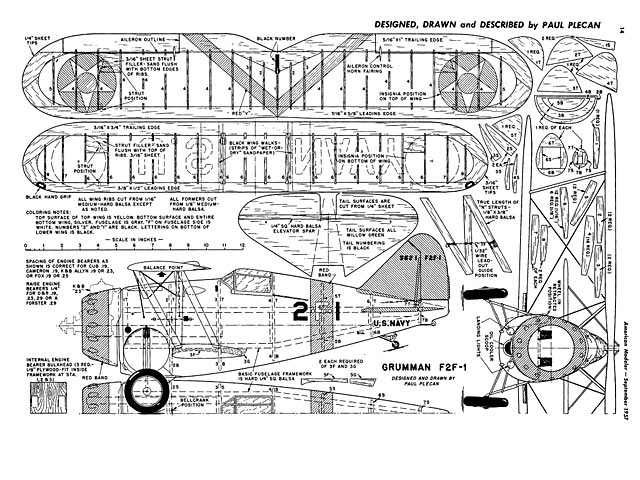 Quote: "Of all fighter biplanes ever built, the early Grumman ships personify a pugnacity and ruggedness apparent in no other type. Chunky, strong, the F2F-1 was a fast fighter for its time; one reason was its retractable landing gear. The F2F-1 was one of the earliest fighters that had this feature in operational or squadron service. First seen by the author at Floyd Bennett Field near New York in the mid-thirties, the F2F-1 was always considered a high priority subject for a U-control model. If you like the F2F-1's looks too, let's build one.

Easiest way to get going is to build the wings first. After cutting out the required number of ribs and tip pieces, cut leading and trailing edges to size. Note that ribs are notched into both leading and trailing edges. Once all the cutting is done, cement together over the plan. The lower wing incorporates some dihedral, so crack the leading and trail-ing edges (after cutting partly through) where the doubled number 6 ribs occur. Propping up tips with scrap 3/8 stock under #7 ribs produces the correct dihedral angle, so just let the cement dry well, while we tackle the fuselage.

A basic framework is built up of 1/4 in square balsa longerons, followed by the various former segments as shown in the step-by-step sketches. The suffix on each former part clarifies its position; T for top, S for side, and B for bottom. Along about now it will be necessary to cut out 2 each of parts 3F and 3G. Thickness is immaterial, but 3/16 or 1/4 stock would be fine. Former 3B is cut off flush with lower edge of 3F-3G so that top surface of center section of lower wing fits snugly against this assembly. Lower wing should be covered and doped now so it can be assembled to the fuselage framework. Silk is recommended for maximum strength and resiliency. In assembling the lower wing to fuselage, be careful to keep alignment right on the button when viewed from above (they should be at right angles). The part remaining of 3B is now trimmed an amount equal to thickness of wing at that point and cemented to bottom of wing.

We can now proceed with planking of fuselage. Use soft 1/8 x 3/8 balsa strips, starting near top longerons and about parallel to them. Due to the pronounced taper of the fuselage from station 3 to the tail at 7, it will be necessary to taper the planking. This is easiest if you have a really sharp miniature plane, but if not, a metal-edged rule laid across edge of planking strip will guide your X-acto knife or razor blade for a straight taper cut where you want it. Sanding will achieve the slight bevel necessary between adjacent strips; the finished fuse-lage should be practically devoid of slits or gaps in the planking. More sanding is in order now to achieve a smooth surface..."