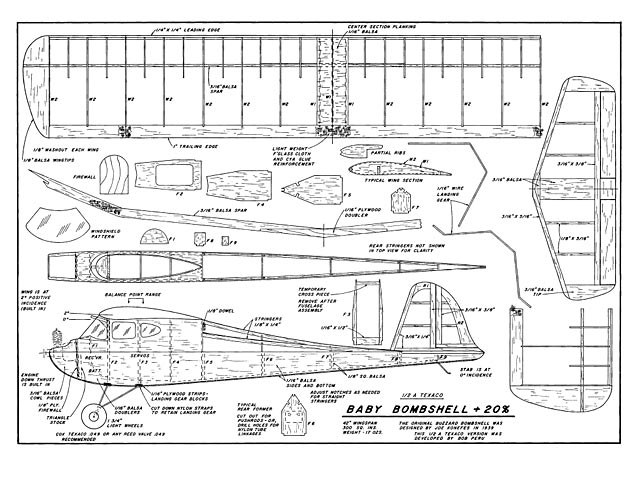 Quote: "Most R/C'ers by now know how much fun it is to fly old time free flight designs with the aid of modern radio gear. SAM (Society of Antique Modelers) membership continues to grow, and competition in this aspect of modelling continues to increase in popularity. Under SAM rules, the old time designs can be scaled up or down to suit whatever size powerplants and type of competition we want to pursue. One of the newest SAM events is 1/2A Texaco; Bob Aberle provided a good writeup covering this event in his Tatone Atomizer (oz9033) article which appeared in the October '91 issue of FM.

The name helps define the highlights of the event. The .049 engine size is used, while Texaco is a reference to the old rules where the amount of fuel carried in the model was limited, rather than the length of engine run time. In this class, the maximum flight time is 15 minutes, and you usually get three attempts to make two official flights. In the event of a 30-minute tie, the tie breaker fly-offs might be unlimited, with no maximum.

The engines are more specifically limited to the .049 Cox reed valve type, fitted with the Cox 8cc fuel tank. Such engines as their Golden Bee and Black Widow are used, along with their new Texaco model, engineered and produced just for this competition class. The aircraft used must have a minimum wing loading of 8 ounces per square foot; for a 300 square inch wing area, this means the model would have to weigh at least 16.7 ounces. It turns out that an .049 will power an aircraft of about 300 square inches very well, and such a plane, with radio gear, can be built to the minimum weight.

There are some choices to be made here, as you could build a smaller model, keeping it light for performance, and the smaller, ligh-ter aircraft should be able to climb to a higher altitude for a potentially longer duration flight. But a larger model, with more lifting area, although it might climb slower, should soar better and have an easier time staying in the thermals for longer flights.

There's a similar choice to be made with the engine and the way you operate it. With a 6-inch prop and high nitro fuel, the higher power output will climb an aircraft faster and higher; but running the engine slower, with a larger prop and lower nitro fuel, will give a considerably longer engine run and may also produce a long flight duration. Using a 7-inch or even an 8-inch prop and mild fuel, four minutes or longer for an engine run is pretty standard. Some competitors use special fuel, low nitro and lower oil content, for longer runs; combined with the use of an 8-inch prop, they might get an engine run of seven minutes or more. They also might have trouble with an engine overheating and cutting out early. The different approaches which can be taken result in interesting competi-tion.

When it comes to the choice of aircraft for 1/2A Texaco competition, you can search out a lesser known design such as Bob Aberle did with his Tatone Atomizer mentioned earlier, or you can go with a well known, proven aircraft. Many of the old time aircraft designs have been scaled down to modern .049 size for this class; the project presented here is based on Joe Konefes' classic 1939 Buzzard Bombshell. This design has been popular ever since Konefes and his buddies in the Buzzards Club of Chicago did so well with them in the 1940 Nationals meet. Joe placed first, getting a 49-minute flight, and his friends placed 3rd and 5th, also with the Bombshell design. The original Bombshell was built with a 72-inch wingspan, and powered with the .60 ignition engines available at that time. Free flight competition design had begun to switch over to the pylon configuration, getting away from the cabin layout. Konefes' design showed that a good cabin model, complete with plastic windshield and side windows, could still compete with the pylon jobs. When he won the '40 Nats, it probably slowed down the move toward pylon designs, at least for a while.

Around 1941, a smaller Buzzard Bombshell A or Baby Bombshell (oz6289) version was kitted by Maircraft; it had a 36-inch wingspan. Bob Peru recalls that for a time, Air Trails magazine was offering to give away Baby Bomb-shell kits as a gift bonus for subscribing to the magazine. The kit at the time cost about $1.75, he believes. Bob subscribed to the magazine and received his kit in the mail; but the local mailman had folded the kit package in half to make it fit in his mail bag! I doubt if Bob built that one.

For today's use, 36 inches made a model a little too small for an .049, so Bob took the 36-inch Baby design, enlarged it by 20%, and ended up with the 42-inch wingspan, 300 square inch version presented here, an ideal aircraft for 1/2A Texaco competition or just plain fun flying. It's interesting that Joe Konefes worked up a smaller version of the Buzzard just a few years ago; he did a 30-inch wingspan, for free flight use, with a small CO2 engine. Here it is fifty years after the original design, and Joe is still having fun with his creation.

Construction of this version is just about like the large original design, except for the use of partial ribs and elimination of the leading edge sheeting on the wing..." 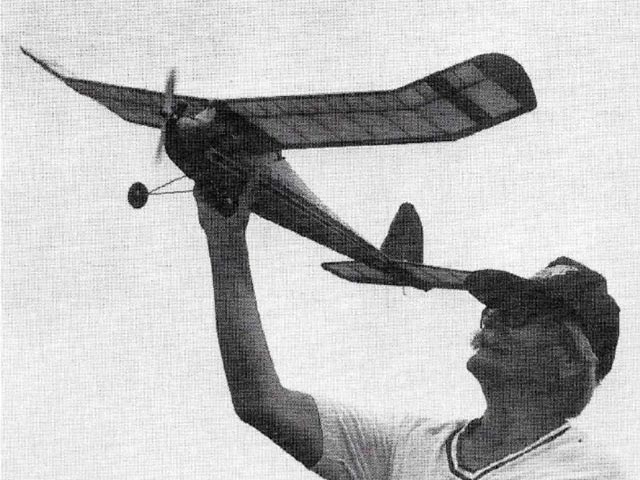