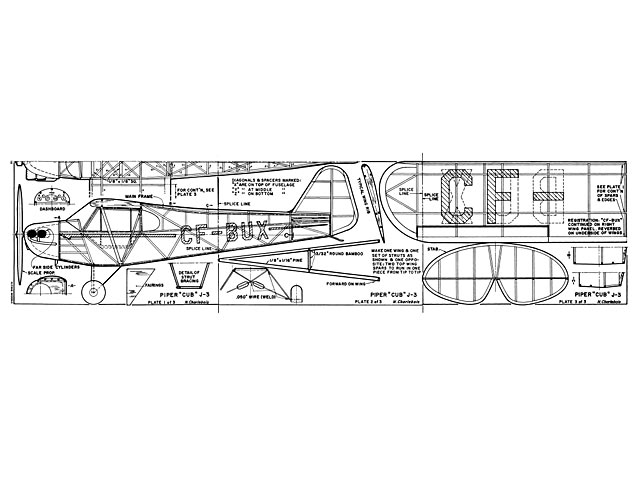 Quote: "Piper J-3 Cub, by Normand Charlebois. Though rated as an old-timer, the Cub still ranks high among those who like small scale.

The little J-3 has established itself as the counterpart of the Ford Model A. Its popularity at country airports is legend. It might even be safe to say that more student pilots learned on this plane than any other of the popular light planes. This popularity kept right on growing as modellers accepted this little Cub with an enthusiasm afforded few other aircraft.

The yen for Cubs grew and grew until contest directors began to complain of the glut of Cubs at scale meets. Undaunted, modellers stuck by this old standby and model manufacturers started producing Cub kits to fill the demand. They came out in all sizes and in varying degrees of detail. It might even be mentioned that soon after ukie flying started, Cubs began to appear on flying fields under the control of two lines. As radio control grew of age, Cubs again took wing under the control of this modern age.

It has been safely stated that any manufacturer can come out with a Cub kit and make a buck. In spite of the cry that there are too many Cubs around, modellers still savor the sight of a yellow Cub winging against the blue sky.

Many fans will reminisce over their personal experien-ces with the Cub, much as we do. The thoughts of those afternoon jaunts may seep through while you whittle a nose block so keep the iodine and bandages around.

Where did the Cub gain this popularity?. It's not an ugly looking plane. And, even by today's standards, still looks the part of a contemporary lightplane. Simple, clean lines along with hands-off flying characteristics make it an ideal model. From the time it left the drawing board it was intended to be a low-price production airplane. So much so that even the paint job was standardized. Ford's low priced cars were all made black and Piper took the cue to set what amounts to a trademark - the all yellow plane with black numbers and flash-line down the side. Here, with due apology to Mr Piper, we have deviated, as we've used the more unique foreign markings. Cubs have flown the world over so we chose this way of interna-tionalizing our model.

Well, down from the clouds. Let's think about construction. There is nothing to fear in the fuselage construction, a point which troubles some builders. Like the prototype, the fuselage shape is simple and free of problems. We felt that it was wiser to stay close to the framework of the full-scale machine rather than create the popular ladder-like frame. It would also be stronger.

To build, tack the plans onto a piece of soft board and cover them with wax paper so that the parts won't stick. Build the fuselage sides directly over the plan making one side at a time. Note that both sides are not identical because of the door.

After the two sides are made, join them at the rear vertical member and add the cross-members at the cabin section. The balance of the cross-members can be added after the fuselage has been aligned in this manner. Add the additional spacers at the bulge line and all top and bottom bracing should be cemented in place. The dorsal fin can then be added and the fuselage can be completed by add-ing the front formers and stringers. Leave the dorsal longeron out until later. The door is designed to open and -lose as on the prototype and is hinged with the Silk-Span covering.

The tail components can be assembled on the plan. Note that these are not cemented in place until after the fuselage is covered. Those who want contest performance might want to in-crease the stabilizer area about 25%.

Now, we go to the wire works. The tail skid is made from a straight pin with the head hammered flat and bent to shape. Bend the other wire parts as noted on the plan. On completion of these parts, cement the tail hook securely in place. Then, assemble the prop unit. The front hook is bent to final shape making sure to mount a few washers and a glass bead between the prop and nose block.

The nose block can be cemented in position as there is ample access through the door for attaching the rubber motor. We might point out that this model is on the small side and don't recommend using the small Cox Pee Wee for power - at least, if you intend flying the model like an airplane and not a missile. Rubber power is sufficient and you can always add a strand or two extra if you like your ships to zoom.

The wing construction takes some care. If the parts are fit properly, you should have little trouble with warping wings. Twelve main ribs are re-quired along with two smaller ones for the top of the fuselage. Build the wing in one piece with the spars run-ning full length. The front and rear edges of the wing can be cut out at the center so that the wing fits the fuselage. Reinforce the points where the struts meet the spars. This done, you can cover the under surface of the wing panels making sure to keep the grain of the covering material span-wise. Leave the upper surface uncovered until the struts are cemented in place and the proper dihedral has been fixed.

Make the forward wing struts from 1/8 x 1/16 pine strips and use 1/16 bamboo for all others. These can be sanded to a streamline shape if you wish but all you need do is round the edges.

The gear can be attached at this time. You can solder the wire parts together or you can wrap them with thread and cement them in place. Add the fairings. We prefer the grain running horizontally as this allows the wood to bend and still supplies a rigid mount.

After the spine has been added along the top, you can finish covering the model. Water-shrink the covering and then apply a coat or two of thinned dope. The covering should naturally be yellow. Our ship featured black cylinders and cooling grille. The lettering can be &pplied using blue tis-sue or the letters may be painted on with colored dope. Note that the stripe is applied in a like manner. After all trim is added you should apply a few more coats of clear dope to get that finished look.

Performance-wise, our Cub flew well. Practically no adjustment was needed save for minor trimming of balance which was accomplished by pushing nails into the soft balsa nose block. The general layout of this design is so functional that trimming takes a minimum amount of time.

First things first. Before trying pow-ered flight be sure that the model has a nice smooth glide. Remove any ten-dency to stall by adding weight to the nose-section as we noted. If your model is unique and dives, add some weight to the tail skid or bend the ele-vators up very slightly.

Start power flights by using only a few handwinds at first. you'll find that you might have to make minor adjustments at this time. Bend the rudder until you obtain the desired turn - we favor flight to the left. Finally, you should have the ship perking along. About now you are ready to attempt some nice stable take-offs. Aim toward the wind and make sure to use a smooth runway. While the old J-3's got off the grassy runways they never would have made it if the grass was four feet high!" 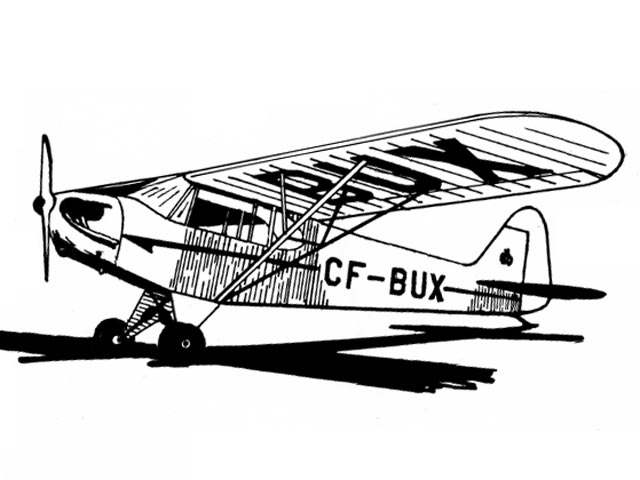