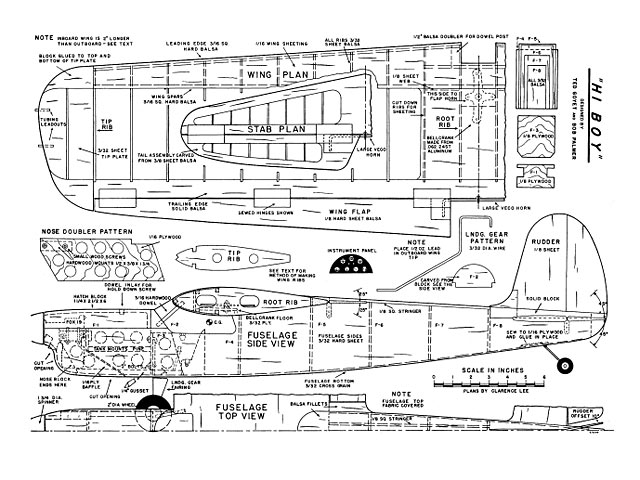 Almost every model has a little story behind it, and here's how this little jewel came about. Every year, I (that's Bob Palmer) usually attend two of the contests of the season in the Frisco area and on one of these occasions, I became acquainted with Ted Goyet, one of the better pilots there. As we conversed, the idea of trying a high wing stunter came to both of us. We discussed its problems, and what you would need to be able to fly it through the pattern.

A low winger lends itself to stunting as a natural. In stunting, if you have experienced a low winger doing tighter stunts upside down than right side up, the reason is that a high winged plane will do tighter loops than a wing on the bottom. This is because the wing is above the center of gravity. Now when you turn a low wing over into inverted flight, you have a high wing, so we've done the same thing, only in reverse, and flying the Hi Boy bears this our. It does tighter inside loops than outside loops.

At a later contest, I received word that Ted had come down with polio. I wrote him a letter and found that he had almost finished a high winger and wanted to know if I would be interested in finishing it and trying it out. I told him I would be very interested.

Ted had done a wonderful job on the plane, and I made very few changes. However, we did decide CO change the engine installation to one I had used on the Pow Wow and Smoothie. I think highly of this method. You're nor bothered with turning the ship upside down to check out your tank, etc. We are actually giving you a choice between the cheek cowl system you see in the picture and the one on the draw-ing. The one on the picture is a little harder and costlier, being composed of balsa blocks.

This plane flies very well, accomplishing the stunts with ease and assurance. Its long tail moment and engine moment make it a very :movie and stable model. For a sport model, this is very braces from the fuselage up to the wing would really enhance the appearance.

The plans are very clear, but one of the things to look for is the method of cutting the ribs. The wing is tapered. To have shown each rib would have used up too much space.

Take 11 pieces of 3/32 sheet balsa wood, and cut larger than the root rib. Place the tip rib template (template should be made from 1/8 plywood) over root rib template with chord lines and trailing edge lined up and drill two clearance holes for 6/32 bolt, one at each end of the tip rib template within 3/4 in of trailing edge, and 3/4 in of leading edge. Now stack the balsa wood and drill these holes. Insert the bolts and tighten. You are now ready to carve half of the wing ribs. By carving the balsa in a straight line from one template to the other, including the spar slots, you will have completed the ribs. Remember, for the right wing, use only 10 pieces, for the right wing is 2 in shorter.

Trailing edge is spliced in the center, and wing spars are spliced. You will notice a 1/2 in thick balsa doubler on the root rib. This is very necessary as the wing has no support in the LE. Also, F2 is a solid piece. We have a connecting dowel between these pieces to give strength to this area.

Please note that you will have to make a special bellcrank. Make from .051 or .062 aluminum.

Recommended motor for this plane is Fox Torp .19, Cameron .19, Veco .29, Tort). 29, Orwick .29, or Fox .29. I would advise sticking to a .19. The original had a Fox .19 installed and was flown on 55 ft. of line and speed was up to almost 60 mph. After building and flying the ship, drop a note to Ted Goyet, Route 1, Box 565, Woodland, Calif and send along a picture of your model. He's a very interested and ardent modeler, and would be pleased to hear from you. Ted's recovery has been very good, and news about this model and what you think of it will give him no end of pleasure. We both wish you good luck and good flying."

Mike Nelson mailed in to say: "Here is a picture for the Hi Boy plan page. Also the model was designed in 1954 at the request of a kit manufacturer, but was never kitted. The model in the picture was built by Floyd Carter and is in Bob's original colors". 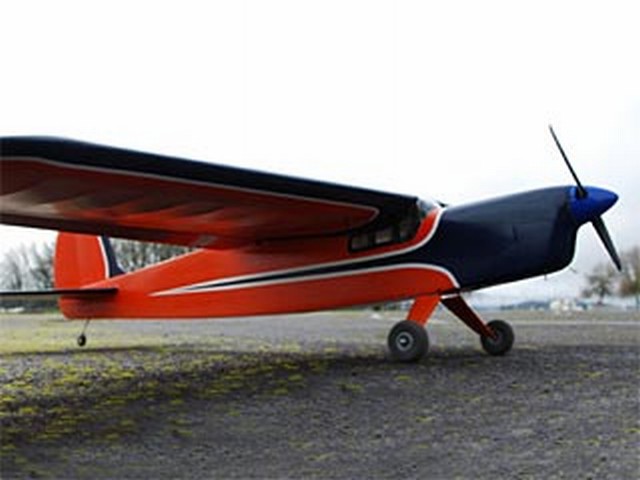