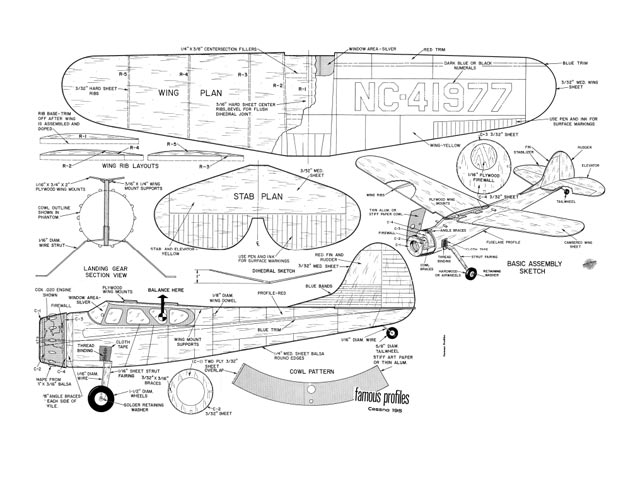 One of the most popular executive type planes in its day; the Cessna 195 was easily identified by its large radial cowl, 'U' shaped landing gear strut and graceful tapered wing of generous area.

Built for comfort and fast transportation the 195 rivaled many airliners of its day. Despite a cruising speed of 165 mph. it could operate from the smallest airports and was as easy and safe to fly as most light planes.

Because of these facts coupled with a rugged construction, the Air Force purchased 195's and made the wheel assembly interchangeable with floats and skis for use in Alaska and other artic regions.

Using authentic scale data we have tried to capture all the attractive features and inherent characteristics associated with the 195. The horizontal tail surfaces were enlarged to improve the general flight performance of the model. Also, the wing centersection was modified slightly to compensate for the basic profile configuration of the craft.

Even the surface details and outlines have been main-tained. The trim scheme and colors used are also typical of many Cessna 195's. As for flying, the .020 engine is just right for this rugged 6 oz craft. The model's weight and size are just enough to prevent the .020 from tearing off into space like a contest free-flight. Yet there's more than enough power to spare for those realistic takeoffs and climbs and lazy sport flying on 15 to 30 second engine runs.

You still need plenty of space to fly in, but at least you don't have to worry about chasing it into the next county. Sounds good, Doesn't it? Well, how about digging out some balsa and cement and getting started. Any other parts you might need, you will be able to pick up later while some of the parts are drying.

Begin construction by first laying out all the balsa and ply-wood parts, such as: the wing; fuselage profile; tail surfaces; cowl formers; wing ribs and firewall. Cut each part to the exact outline and sand off any rough spots before attempting to assemble any parts.

Main landing gear strut is bent from 1/16 diameter wire. After it has been bent to the desired shape, drill a slightly oversized hole in the fuselage profile at the topmost position of installation...." 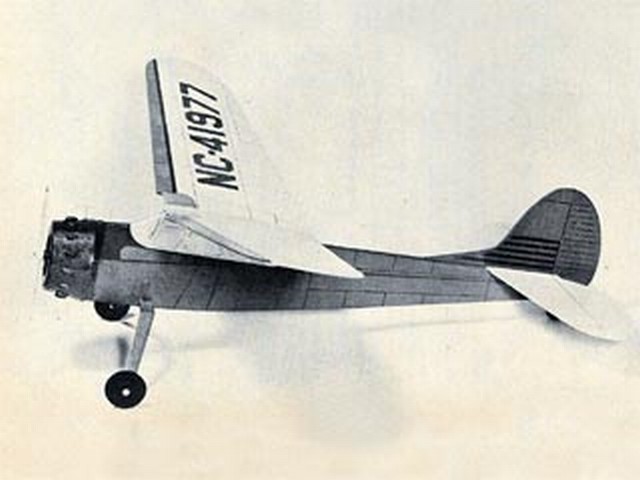