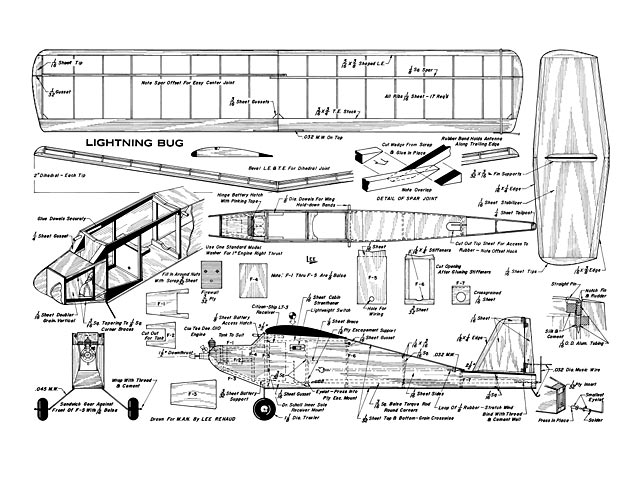 Quote: "Since the advent of the Cox .010 engine planes are smaller and add to this combination the lightweight relayless receivers and we have 7-1/4 ounce R/C planes.

The first RC job we flew - designed by the writer, built by MAN's editor and chased on a 50-50 basis by the both of us - was an Ohlsson 60-powered behemoth that weighed a ton. Lightning Bug, the 40th RC, spans 26 inches and is powered by the new .010. It weighs less than the batteries did in the big job 13 years ago. Not half as much as did the Good Brothers receiver with its batteries.

There is nothing really sensational about an .01 RC. No freak, this one is built like any other RC. Proportions are normal and materials generously strong. At 7-3/4 ounces this model is 4-1/4 ounces heavier than the designer's free flight for the same engine, suggesting that weight cannot be reduced easily - there just isn't enough wood in the craft to permit any important saving. The radio is a Citizen-Ship LT 3 with the matching SN escapement that came in the same box.

Lightning Bug may be bigger than some .02 bombs, but it has roughly half the area of Ken Willard's .01 which, we hear, has about 200 squares. Recalling much that has been published about .02's, doctored escapements, and so on, for extreme lightness thought so necessary, one may wonder. The .01, half as big as the .02, definitely does not require doctoring anything in order to fly.

By careful building and material selection, the .01 can be pared to under seven ounces, but it climbs at 7-3/4. The thing to watch is extra weight... " 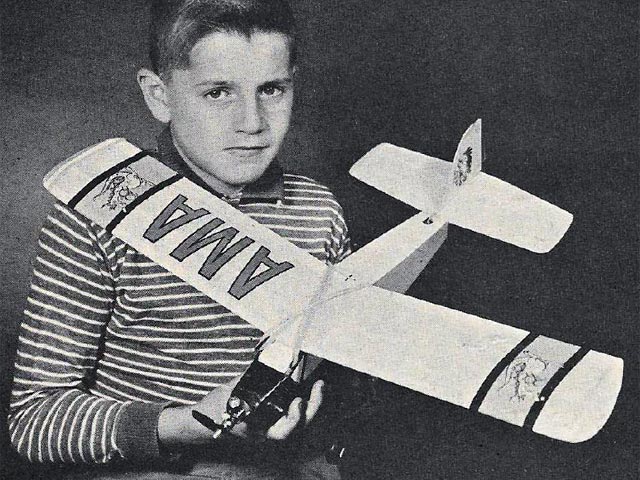