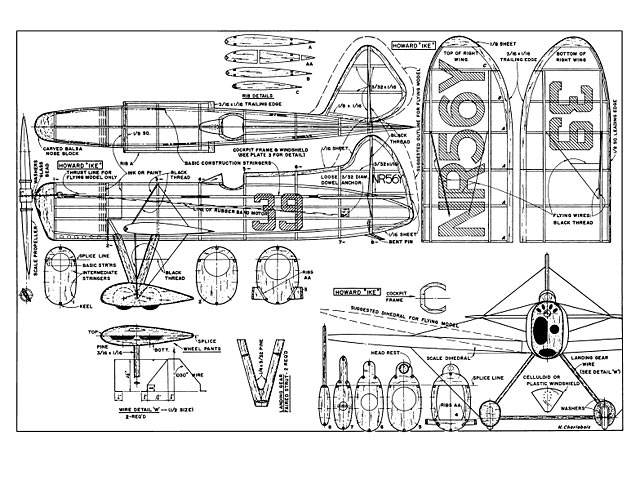 Quote: "Of the Howard 'Ike' and its kind, the same can be said: sleek looking racers very seldom make stable models. And Ike is no exception to this rule.

One of a family of planes designed specially for top notch pilots - such as the well-known Mr Mulligan, the Nightingale ambulance plane, the DGA-15 still flying around, and an earlier racing brother, the Howard 'Pete' - the subject of this article was one of the best-designed planes to participate in the 1932 National Air Races. Other contestants were more powerful, larger, heavier, faster, but none were as maneuverable, as obedient to its pilot as Ike. It won the Aerol Trophy Race for Gladys O'Donnel, to prove it's worth. Ben Howard's design was a success!

Unfortunately, the same cannot be said of the model made from it, unless you accept gross departure from scale. The author's first version, made in 1944; had heavy dihedral, enlarged tail and rudder surfaces, as shown on the plans, and the whole landing gear was changed to a simple, light piano-wire-only affair. No pants, no strut fairings, no nothing. Thus equipped, it flew a distance of 500 ft a couple of times. But the scale appearance? A mess!

The model photographed here, was made with close attention to scale and surprisingly, it balances very well, without the need for nose weight; but the performance is nothing to brag about. One flight of about eighty feet, he distance it takes for the rubber to unwind, a steep glide to the grass, and an abrupt stop!

However, since fast ladies still remain popular in spite of their shortcomings, it is hoped the extremely appealing lines of the Hoyvard Ike will make you forgive and forget the rest. On the ground, the plane rested on the rear wheels and tailskid, but stood level on all fours while gather-ing' speed for the take-off. This is obtained in the model, by slipping some lead in the nose.

First, here is an idea to help preserve your issues of Flying Models. Open up the staples in the center of the magazine, remove the pages needed and get cheap copies of them. Although poor reproductions are thus obtained, enough will be visible to cut out templates for ribs and formers. Cut one sheet at the fuselage splice line and match to the next one. You can pin the whole thing to your working board and reassemble your issue of Flying Models.

Now, for the construction proper. Begin by cutting and splicing all formers, sheet outlines and ribs. Note that on former 1, only the basic construction stringer positions are shown, but the centerlines of intermediate or secondary stringers is indicated. This applies to all of them.

Now, pin down the basic construction stringers on the plan view and cement the bottom half of formers, upside down. Note that we are using the same idea presented a few months ago for the construction of the Heath Parasol (oz1199). As mentioned then, the horizontal symmetry of a model stands more to suffer from misalignment than the side profile, while the extra depth of the fuselage will offer powerful resistance to any twisting due to the springing of different hardnesses of balsa strips. After this lower half shell is dry, remove form the board..." 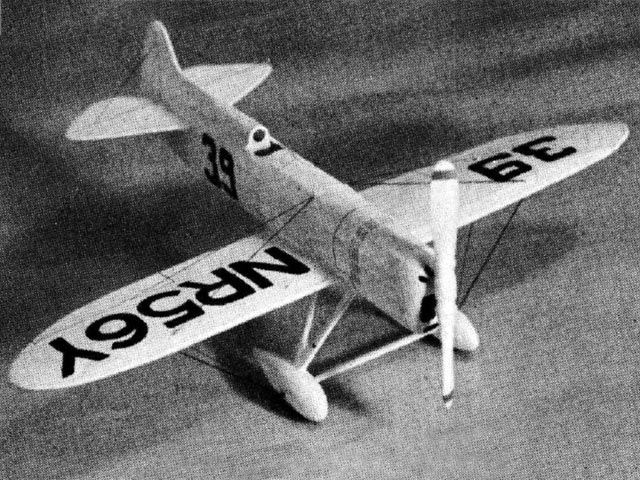