Quote: "A simple but efficient class A gas model for the beginner or expert.

THE very small class A motors in the .099 bracket are now coming into their own. More power and efficiency in the -mighty mites permit the development of cabin-type, realistic models with ability to compete with the super-streamlined jobs. The Pocketeer fills all the requirements for good looks, realism, and simplicity of construction. For sport flying, this little baby can be built to weigh twelve ounces and it will still be plenty rugged for the Sunday flying. In competition it will have.to weigh 15 ounces under the present AMA rules of 7 ounces per hundred square inches. This present wing loading penalizes the small models and should be revised. However, even with this extra load, the Pocketeer has really stupendous glide with a very low sinking speed. The flight tests verify this statement. The first flight was 1:12 on a ten-second motor run, at half power. The best flight was 2:04 on a sixteen-second motor run, at full power. Remember that these flights were without the benefit of risers or thermals, as the flights mere made in the late evening. If the model is built strictly for sport flying it is advisable to limit the length of the motor run, plus using reduced power. At twelve ounces, the Pocketeer is a real floater.

Construction: This model is extremely conventional in design and requires little explanation. The fuselage is of the box-type construction plus a 'V'-type backbone. This backbone is made after the box has been completed. A 1/8 square longeron is glued at the front face of the cross-piece at station #12 on the box.

The front end of the keel longeron is anchored to the rear end of the cabin. The 1/8 square uprights are now inserted in place-to complete the backbone.

To facilitate bending the 1/8 square cabin longerons for the wing mount soak them in hot water for approximately fifteen or twenty minutes and bend; glue in place while wet. Don't glue the 1/8 sheet landing gear fairing, in place until the model has been flight tested. When ready for everyday flying you can add this fairing. Note that the fairing is not glued to the fuselage; this permits the landing gear to flex without snapping the fairing.

The wing does not require any instructions, but the stabilizer and rudder should be built in the following manner. Build the outside frame for both of these members and when dry remove them from the workboard and insert the main spar and ribs in both. Form the ribs to a symmetrical airfoil shape on both as shown in the perspective drawings.

Flying: The Pocketeer should require no adjustment other than the normal turn required in the glide. However. if the model has a tendency to be nose-heavy when balanced, simply move the batteries to the rear until it balances. If tail-heavy, move the batteries forward until good balance is achieved. To balance. place your index fingers beneath the wing at the main spar and raise slowly.

After you have balanced the model you are ready for the test glides. Always test glide the model into heavy, high grass. This will prevent any damage to the model if glided incorrectly. On the first glide, kneel down and gently toss the model forward, always point-ing the model toward the ground. If the model is guided with the nose up it will immediately stall and not give a true picture of its gliding ability. If the model is fast on the glide insert a sliver of balsa beneath the trailing edge of the stabilizer. Continue to insert incidence until the glide is absolutely flat. If the model tends to stall on the glide insert sliver of balsa beneath the leading edge of the stab. Continue inserting the incidence until the stall has been eliminated. When the flattest possible glide has been achieved, start inserting turn into the glide. The Pocketeer can be adjusted to turn to the left under power and to the left in the glide. Glide the model until the model has a tendency to turn to the left about five feet for every 100 feet of glide.

Now that the proper turn is in the glide, power flights can be attempted. The first flight can be made with about half power. Note the turn tendencies under power, and if the model has a tendency to turn too sharply to the left, remove some of the left turn in the rudder. Don't be hasty at this point; try four or five low-power flights before turning on the juice." 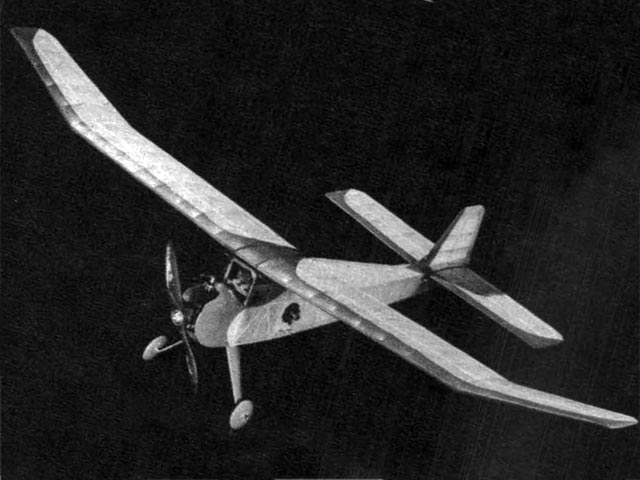