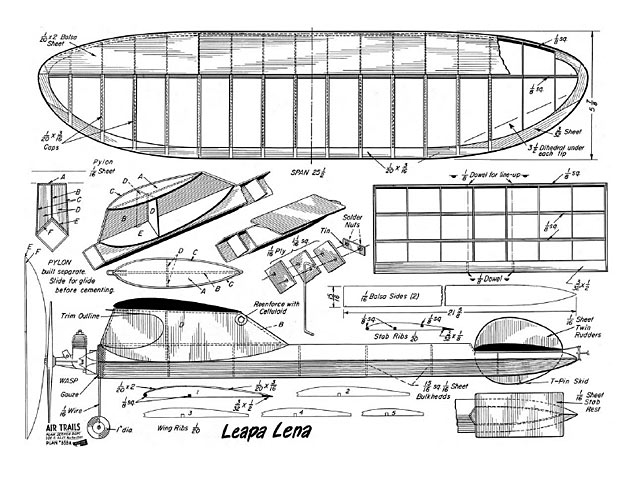 Quote: "There is good reason for the appearance of the pylon on most winning designs, yet the sight of one will drive some model builders away from such a model. With Leapa Lena, we hide the pylon in the cabin and produce a model that is more on the realistic side. The cabin was built separately to help the final test flying; the wing can be shifted to obtain a good glide.

Twin rudders help when take-offs are made on rough ground. Flown with engines all the way down to .02, she was really leaping with an .049. The model was weighted with clay to bring it to 7-1/2 oz, and though the glide was fast the climb was sensational.

The Wasp was used with the timer tank. Other engines can utilize an eye dropper for the tank and visual timing employed.

The all-balsa fuselage offers a great deal of strength; with the fuselage set on edge, it can be made smaller and yet fit the engine mounting holes.

The sides are cut from sheet and two L's are made up. To one of these cement the bulkheads; when dry, cement the other L over the bulkheads, forming the complete fuselage. Make up the firewall and the gear and cement in place. Be sure to cement well. Cement bandage around the nose. Add the stabilizer platform and dethermalizer hook.

Cut the cabin bulkheads, tack-cement the lower ones in place, then build up the cabin. Remove the cabin and sheet its sides. The cabin 'window' is not cut out, but is indicated with Trim-Film. To trim the lower edges fold a sheet of sandpaper down over the top of the fuselage. Hold it down tight and then take the cabin and slide it back and forth over the paper. The cabin will trim itself to a perfect fit, The top is then trimmed. Add the wing hook to the front of the cabin; cut a hole at the rear - this area should be well cemented.

Wing and stabilizer are made in the usual manner; cut out the required ribs and tip outlines. Assemble the three panels over the plan; when dry, these are removed and sheeted separately. Upon drying, edges are trimmed and cemented together with dihedral. Add cap strips to ribs; these extend over the trailing edge and are trimmed with sandpaper. The stabilizer is next, then the rudders are cut and cemented in place. Add the top dethermalizer hook, see that it is directly above the hook on the fuselage.

The model was covered with tissue and doped well to preserve the structure against the hot fuel. We used butyrate dope and sanded between coats. The trimming was done with Trim-Film.

Test flying is done before the cabin is cemented in position; hold the wing and cabin in place temporarily with rubber bands. After the model turns in consistent flights, cement the cabin in proper position.

To obtain consistent flights: Glide the model until a straight glide with a slight 'mush' is observed. Fire up and when the engine has about five seconds left, launch the model. Do not throw it, as the model will assume its proper speed and will show its true flight characteristics. The model should be launched at 40 degrees. If it turns tightly to the right and the glide circle is large, tilt the stabilizer (looking from the rear) so the right tip is lower than the left..." 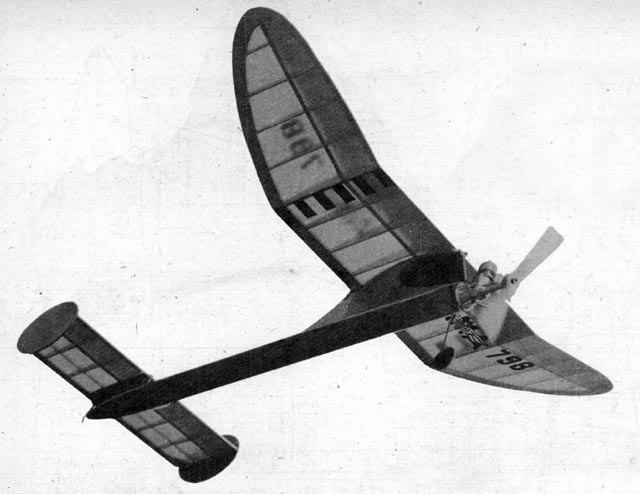