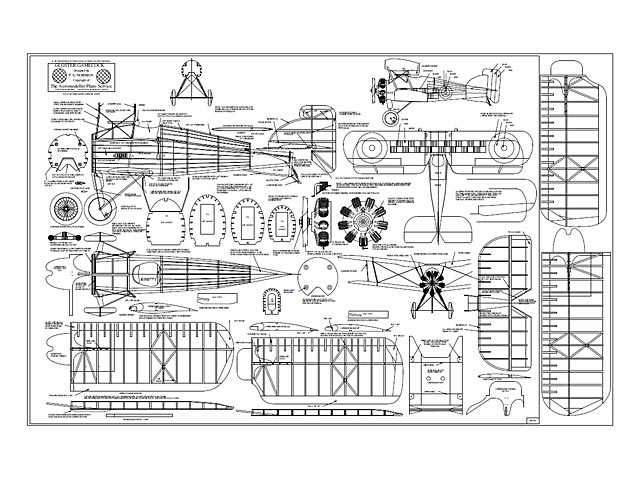 Gloster Gamecock. Scale FF biplane published in January 1951 Aeromodeller. Has a pendulum controlled elevator and the designer claims it to be extremely aerobatic. This is a modern redrawn plan in PDFvector format.

It was a single bay biplane, short and somewhat fat, having a smaller lower wing. A high lift upper wing was used with a thinner section lower wing, the chord of upper and lower being equal. Both wings had a pronounced dihedral angle and stagger, and the upper wing was carried on inverted W type centre section struts. The fuselage was faired to almost a circular section, tapering to a knife edge. The undercarriage was fitted with the then new Oleo shock absorbers.

The fuselage carried two machine guns concealed in troughs on each side of the pilot's cockpit, another smart innovation.

The aircraft was finished silver all over, with re& white and blue roundels, and the squadron markings were carried along the top plime and the sides of the fuselage. It had a top speed of 145 mph.

The Gamecock II was similar to the I except the centre section was carried on the conventional splayed struts and the wings were attached to the centre section giving increased strength and a flat portion between the dihedraled wings. The power of the engine was also increased to give the machine a top speed of 155 mph.

The Gamecock was highly manoeuvrable and would fly 'hands off' with no tendency to any vices. It marked the end of the all-wood fighter, as experiments were being made with the 'Siskin' and 'Bulldog' type of metal construction.

The single seater fighter had always appealed to me, and this model of the Gamecock is one of my series of the most famous fighters from 1916 to 1942, which I am building.

The Aerobatic Model: Owing to its comparatively short fuselage, the machine is aerobatic, but its generous wing area, dihedral angle, large tail and rudder, make it a fairly safe model to fly. It has a pendulum controlled elevator, which I now fit as standard, on all my models, and a wing loading of 11.8 oz/sq ft (light for me!).

The model turns to the left, and can execute beautiful stall turns, also loops, bunts and inverted flying. The machine does a diving roll out of the inverted position in a most realistic way.

The inverted position is, I believe, brought about in the following way: The model is first of all given a little more right rudder and slightly more elevation on the adjustable tail, and it will go into loops. Quite often, when climbing up to the second or third loop, the machine loses a little forward speed, and being in a steep climbing angle, the pendulum weight falls back as far as possible; then, exerts itself and the machine reels over. The weight is then falling back, giving full down elevator, which, when the machine is upside down, becomes full 'up'. The model flies thus for perhaps 70 to 100 yards gradually carrying into a shallow dive, when at a certain point the weight suddenly falls foward, the machine dives at speed and then recovers to fly on its natural course.

I have detailed all of this performance, as it is most interesting to watch, and I would be pleased to know if this manoeuvre has been performed by any other free flight scale enthusiast. (I have had this manoeuvre performed by my large 4-1/4 lb Sopwith Camel model, too). I would not advise anyone to attempt this until they have become perfectly familiar with the model, and are prepared to take some pretty fast and heavy crashes!

Complete building instructions for this model are issued with each copy of full size drawing (see 1/5 scale reproduction opposite), which is available from the Aeromodeller Plans Service."

Update 25/01/12: new version of this file added, hogal fixed some errors around the nose. 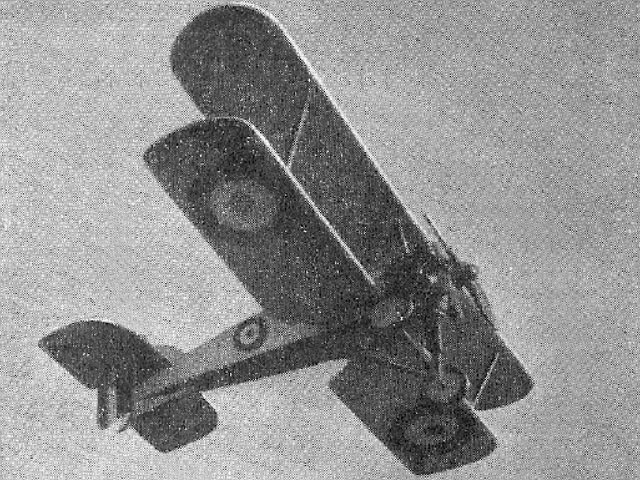