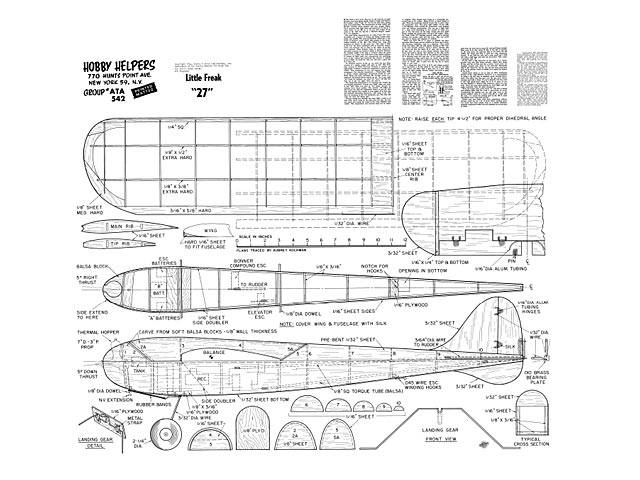 Dale Root, genial proprietor of Root's Hobby Hut, Oakland, Calif, with his Half-A radio control. He called it 'Little Freq #27' which we modified a little to 'Freak.'

This Half-A R/C stunt ship has all the features of good precision and stunt flying usually found in larger and heavier R/C models. Little Freak '27' travels fast and clean, giving good wind penetration. The incorporation of both rudder and elevator controls allows positive and very snappy flights. Yet it recovers from tight turns and maneuvers as fast as it enters them. It has 300 sq in of area and weighs 20 oz ready to fly. Not too big for a Thermal Hopper engine on a 7/3 propeller.

The good flying characteristics of Little Freak 27 were developed over a period of testing and flying various force setups and airfoils. The semi-symmetrical airfoil has a low center of pressure travel which adds greatly to the longitudinal stability of the ship. The thrust line, wing and stabilizer are nearly on the same line. The wing is close to the CG. All heavy equipment such as batteries, escapements and receivers are as close to the center of gravity as is practical. These features make for quick maneuvers and quick recovery at a touch of rudder or elevator. Because the greatest weight of the ship is centered about the pivot point or CG, it takes very little force of the control surfaces to change its flight path, and consequently the stabilizing force of the vertical and horizontal fins returns it quickly to level flight. So much for why you will have a good safe R/C stunt job.

An Aerotrol receiver of 2-1/2 oz was used, but any other receiver of a similar weight will work as well. The Twin tube receiver of North American Products is reliable and lightweight. A Bonner Compound escapement is used on the rudder. This escapement in turn will operate the elevator escapement. For elevator escapement, a Citizen-Ship PSN, or similar reliable lightweight escapement should be used. When flying you must remember the elevator works in a sequence; up-neutral-down-neutral-up etc. So if you wish 'up' twice, for instance, you must run 'down' off after the first 'up' to get 'up' again when you need it.

The compound escapement is an amazing and reliable bit of precision machinery. It gives you 'right' when you want it and 'left' when you want it. You obtain elevator by beeping three times rapidly. The controls will follow as fast as you can snap the transmitter button on and off. The ship will respond very rapidly to your signal. If at first you get confused attempting maneuvers with Little Freak 27 don't do anything; as the Cub instructors say: the ship will come out level and flying safe.

Perhaps taking you through one short flight would be of help when you're ready for the ship's first solo hop. Be sure you check and correct for warps in the wing, stabilizer and rudder. The escapements and controls must not be sticky or sluggish. They should work freely on a practically un-wound loop of 1/8 rubber.

Either ROG or hand launch is safe. When the model has climbed twenty feet or more, beep the transmitter once. This gives right rudder. If you wish a full 360-deg circle around the transmitter, keep beeping once and holding momentarily. You can get a tight turn or a wide circle depending on the number of beeps you give it. For left turns, do the same, except give two rapid beeps; holding the second beep will give left rudder. Keep the Little Freak 27 heading upwind while you're gaining altitude, but practice right and left turns. This way you'll get used to timing and response of controls.

When you have 100 ft or more of altitude try your elevators, three beeps, and see whether you have up or down. The elevators, remember, work in a sequence. (You could check this before take-off with engine running so that 'up' is the next elevator control.) Give it 'down' elevator into the wind and dive for about 25 ft; this will be about a 60 degree dive. As soon as you release elevator, beep three times and hold it, giving 'up' elevator as the ship levels out of the dive. You'll get two of the quickest and cleanest 10 ft diameter loops you ever saw. If you want more than two consecutive loops you'll have to work the elevator after the first loop. Give it a touch of 'up' at the bottom and touch of 'down' after it goes over the top for as many loops as you want.

For a wing-over, dive 10 ft to 15 ft and release control. As it approaches a 45 degree climb on the pull-out, hit right rudder once, and hold, until it goes over , in a nice clean arc on the right wingtip. Release rudder and touch it again just as it levels out downwind; this will stop any zooming tendency it may have..."

Update 22/03/2019: Replaced this plan with a cleaner version (removed noise and creases), thanks to Pilgrim. 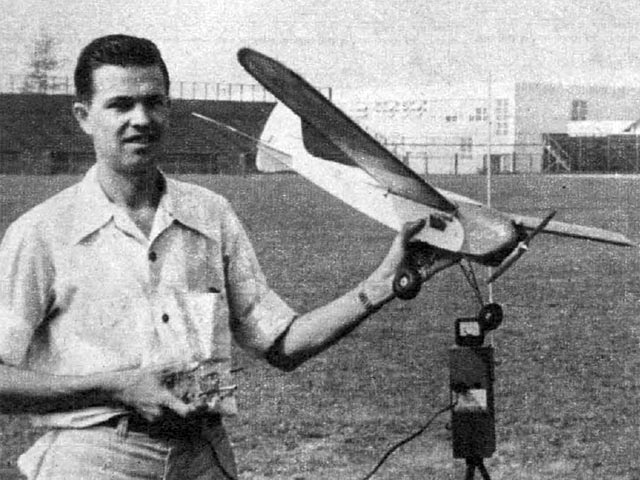