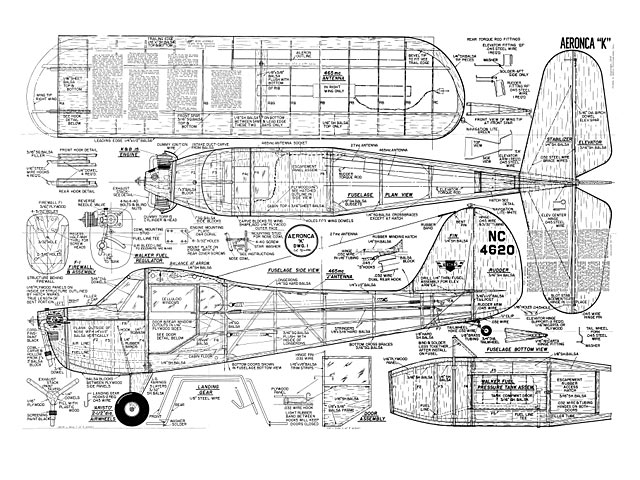 Quote: "Noted husband and wife modeling team, Ed and Doris Yulke, worked out this 1-3/4 in to the foot scale model of a sturdy old plane which makes a perfect radio control job. Various R/C rigs will fit. Aeronca K, by Ed and Doris Yulke.

Twenty years ago (when the male member of this husband and wife modeling team was helping design the Luscombe Silvaire in West Trenton, NJ) our flying club's 'official' craft was an Aeronca C-3 'Flying Bathtub.' About to spend one lunch hour upstairs in the 'Tub', we noticed a trim cabin ship settling down on the field. In those days, any airplane that was the least bit unusual drew the entire seven-man engineerihg department like a magnet - particularly since we were designing a two-place cabin Job, the first all-metal production lightplane.

The first 'whatizzit' thrown at the pilot drew a proud 'Aeronca K' from him. As things progressed, we found ourselves taking short hops, one at a time, around the field. The ship had a graceful yet solid feel to it, unlike most lightplanes of the late Thirties.

We admired it, noted the two cylinder single ignition Aeronca engine, boasted that our Silvaire would have the NEW four cylinder flat twin ignition engine of FIFTY horsepower! We hadn't flown the first '50', didn't fully realize that the extra weight of all-metal construction would more than eat up the difference between the Aeronca's 36 hp and our 50 and that our ship would have a 'solid' feel bordering on being sluggish!

We saw K's around for several years, but it dropped from our thoughts until two years ago we were nosing around to find a suitable subject for an R/C scale plane. Wading through piles of plans, a ritual with any modeler who's been in the game for a while, with us is a disease. We came upon a Megow rubber scale model of the Aeronca K - that did it! The discussion about the equipment she should carry as a radio job waxed hot and furious, until we narrowed it down to what the ship should be expected to do.

We finally decided that right-left rudder, up-down elevator (but not for full stunt), two-speed engine control and engine cut-off was required. This was before the advent of the AMA Scale Event rules, but we felt even then that to require an exact scale job to do outside loops was ridiculous. The initial rules for the event have borne out our thinking. To fly any ship in the wind, it must be trimmed out fairly flat, hence elevator might be required for take-off. To be able to take-off requires full power, to fly the pattern requires some-what less power, hence the two-speed set-up. To be able to cut the engine in the event of trouble and to bring the plane down where wanted was important, hence the cut-off.

What size to build was the next question. We both like small airplanes, but the 1-1/2 in to the foot scale first discussed was too small if four escapements were to fit into the cabin. When we went the other way 2 in to the foot seemed too large; with a 72 inch span we knew weight would go up as size did. Rough layouts at 1-3/4 in to the foot seemed just about right. This came out at 63 inch span; we figured a Torp 15 would do the job nicely with 55 to 60 ounces of weight.

About this same time, cascaded escapements were being 'wrung out' by West Coasters. We also liked the idea of the two-channel, simultaneous feature of the then new Babcock 465mc rig. Since we had decided to build at least two airplanes, it was simple - install one system in each. Doris, edgy of punching 4 for down, 5 for cutoff, preferred the 2-channel for its simplicity, Ed was curious about the cascaded deal.

From our experiences to date, we can point out that the 2-channel is the simplest to operate, particularly for flaring the ship off, close to the ground, with 'up' elevator. Up can be held on the Babcock job, with right and left still available. The only part of the cascaded deal that is faster and simpler is the 'quick blip' engine control instead of dialing 3 on the rudder of the Babcock job..." 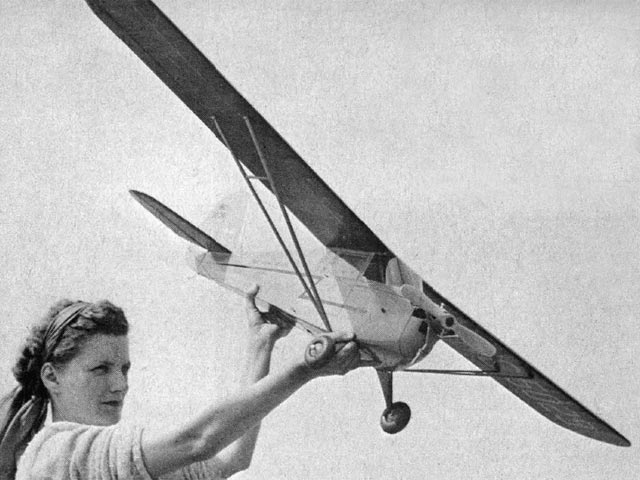