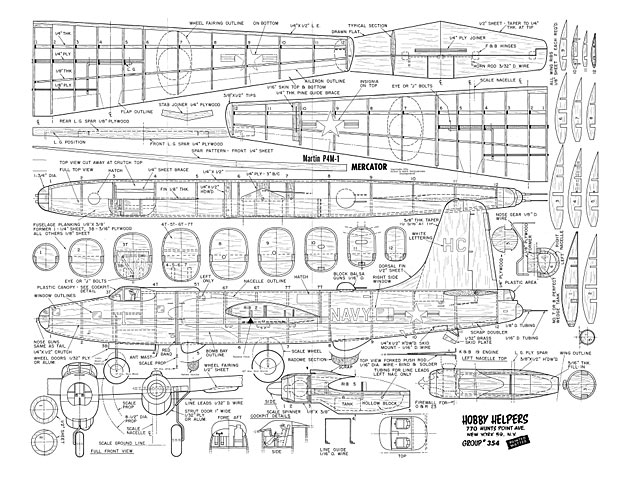 A little-publicized phase of Naval operations is long-range patrol work. The smaller fighters and anti-submarine attackers may have more roar and zoom, but prominent in the background is the big solid patrol plane. It's not the fastest aircraft in the Navy but it can fly for hours on end through all kinds of weather to seek out and photograph an approaching enemy, sow mines and be a watchdog over the nation's sea approaches.

Martin's P4M-1 fulfills all these functions admirably. Naval aviators who fly it claim it to he more trouble-free than most. It has no bad habits, and although patrol flying can be grueling the P4M makes the job less so.

The Mercator is a big airplane spanning 111 ft and is 84 f. long. Though pretty conventional in appearance, there are a few surprises under that Blue paint. She's not a twin-engine aircraft. Those big nacelles house both prop and jet engines. Two 3250 hp Wasp Majors turn the props and two Allison 41 turbojets deliver 4000 lb thrust each. Able to cruise at a comfortable 200 mph for 3000 miles, the prop and jet combination boosts speed to over 350 mph when additional speed is needed. The jets are also used for take-off when heavily loaded.

The Mercator normally carries a crew of nine men. There is ample armament. The nose and tail turrrets carry 20-mm guns. The top turret has 50 cal guns. The large bomb bay is fitted for carrying mines primarily. Search radar and long-range, electronic equipment enable the big ship to fulfill its reconnaissance missions.

The twin-engine model fan will find the Mercator a real natural for building and flying. There are lots of straight lines to make the job easier and the size is not unwieldly.

Scaled at 7/16 in = 1 ft from factory three-views, the model has a span of 49-7/8 in and a length of 37-5/8. The original model was patterned after the prototype XP4M-1; however, the plans incorporate a few changes made in production aircraft which won't bother the flying qualities. Changes from prototype are: Fin and rudder are enlarged, tail turret is extended, wing has fiat center section with dihedral outboard of nacelles. The original had straight dihedral.

It would be fine if every model could be sealed down exactly with everything a miniature duplicate of the big aircraft. Such is not always the case, however..."

Update 05/08/2019: Replaced this plan with a clearer copy (paper creases removed, cleaned up the noise, fixed some small alignment issues), thanks to Pilgrim. 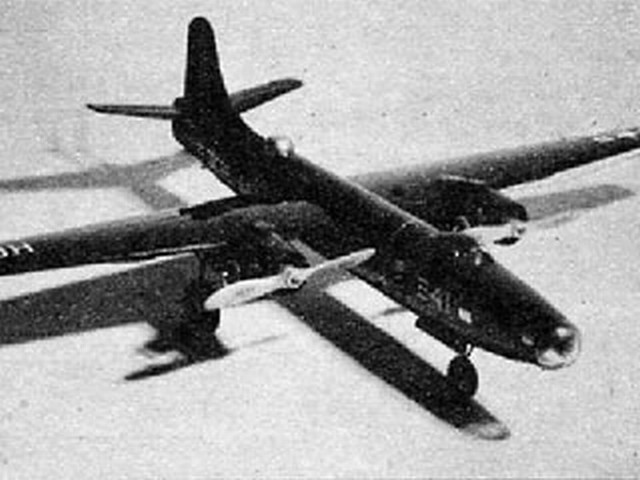