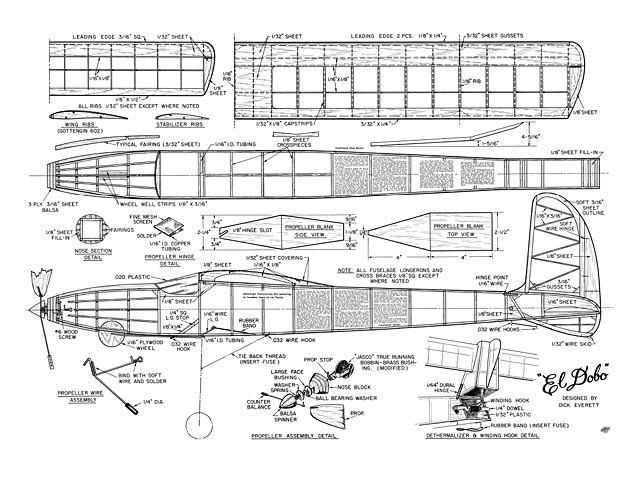 Quote: "This well known West Coast designer won a 'first' at the Nationals with his cabin model entry

For quite a few years the goal of all the rubber model builders has been the winning of the Wakefield Contest. The number of models designed for this event is countless, and the number of models actually built is also very large. But it has remained for a select few to emerge triumphant. Your author has tried for fifteen years and has built and designed a number of models exclusively for this event. El Dobo is the direct result of these years of experience. We have tried to combine all the good features of these numerous models and added new features which promise bonus efficiency.

Those of you who have been to contests have probably seen a great many models with retractable landing gears. The majority of them would not support the model for an unassisted take-off, because of the gear folding prematurely, resulting in a delayed flight and probable damage to the ship. On the other hand some models have had gears so complicated the working percentage was nil. This retractable on El Dobo is simple and adds no extra weight to the model. The burning of a fuse allows the gear to retract after the ship has taken off. It does require a little added preparation before the contest in the way of the loops of thread. Simple, isn't it?

The propeller is another feature of this model. It's the popular flip-flop type prop pioneered by CC Johnson of the El Dobo Brainbusters. This feathers under power to its own optimum axis, thereby allowing a more constant thrust output for the dura-tion of the power flight. When the power is exhausted the prop folds back like any other folder. The main point in the prop, though, is its detachable blades. It has been quite a large problem to replace broken blades or to change props for different climatic conditions.

We had been giving serious thought to this matter of changing props but had met with all kinds of trouble in getting a hinge that would stay in one piece under the rigor of contest flying. All the hinges bad the habit of parting company with the blades. The idea presented herein was seen at the Nationals on a prop by Alfred van Wymersch. Tests with this type of hinge proved beyond a doubt that it was very good and would work satisfactorily. In flight the prop has acted well, giving a nice high climb and taking all the knocks of contest work. Blade change is very fast and easy, requiring about five seconds.

The idea of hinging the tail is not new, having been used for years, but on this model it serves a dual purpose. Besides providing an easy means for winding it is also the dethermalizer. The combination of large props and more and more rubber has made the winding of a model quite a task, so it was decided to try to make the job a little simpler by winding from the rear. The combination of the dowel with the winding hook and the hinged tail proved the right answer.

The wing section was decided on after thorough testing on a previous Wakefield and a large seven-foot gas model. It is the Goettingen 602. This is a ten percent thick foil having all the characteristics of a good model foil, low drag and high lift. The leading edge of the wing and horizontal tail as well as the trailing edge of the wing are all planked with 1/32 sheet. The wing ribs are all cap-stripped to fill out the section. Further details of construction appear on the full-size plan.

A dye was used in the clear dope to provide a deeper and longer lasting color to the colored tissue. The fuselage and vertical tail were doped with Lithosol Yellow G Concentrated and Butyrate dope. the wing and horizontal tail with Lithosol Red 2B and dope. Both dyes are manufactured by the du Pont Corporation and are very cheap. Your local dealer will do very well to stock ithese items since they add practically no weight to the finished model and the dye makes the model much more beautiful.

When first flown the model needed more vertical tail area. which was noted by a slight 'Dutch roll' oscillation. When the needed extra area was added, test flying was short and very sweet. El Dobo required a little extra incidence and a little side and down thrust. After these small adjustments were made time started to build up. Three successive flights under the Wakefield rules resulted in two flights of maximum time of five minutes and one of 4:43. A very nice trio for the first of January.

The motor should take 850 winds under very good conditions, which will give you a prop run of about a minute. By this time the ship will really be upstairs - then watch that glide!"

Note planfile includes further construction text (which does not appear in the article).

Update 13/06/2019: Replaced this plan with a clearer copy (removed noise and paper creases), thanks to Pilgrim. 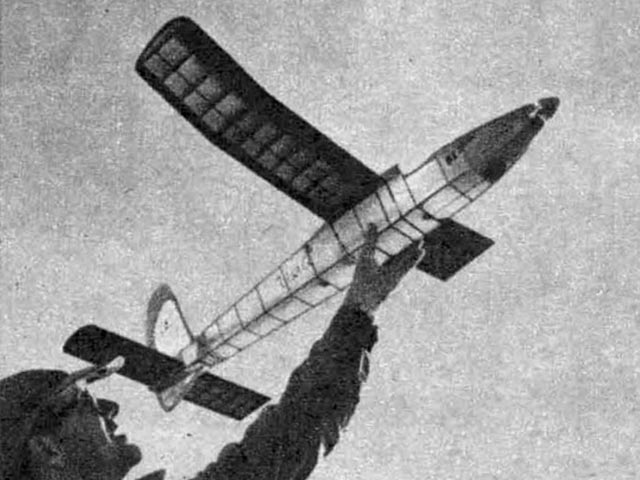