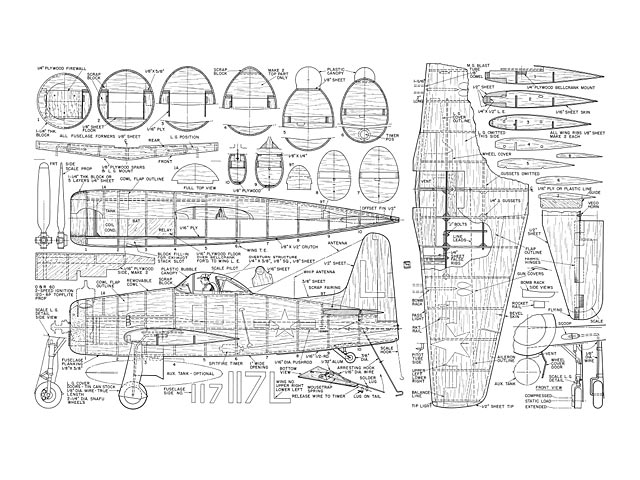 Last of the piston-engined Grumman fighters, the Bearcat represented the ultimate in carrier fighters. Using the big R-2800 series Pratt & Whitney 2250 hp engine, the Bearcat's take-off and climb performance was the hottest of any prop fighter. In a demonstration before the public a few years ago the Bearcat was airborne in 115 feet and climbed to 10,000 feet in 100 seconds.

The F8F-2, capable of nearly 500 mph top speed, carried a variety of armament. Four .50 cal machine guns or four 20-mm cannon were mounted in the wings. Two 1000-lb bombs and four 5 inch HVAR Rockets could be carried under the wings. Various size auxiliary tanks could be slung under the fuselage belly for longer range.

Built at the end of World War II, this worthy successor to the Wildcat and Hellcat did not see any action but joined the fleet immediately after the war. The Bearcat has served well, and the few left are used for training at reserve bases. Some were sold to the French Air Force. Air Show fans will best remember the Bearcats used by the famous 'Blue Angels' Navy Aerobatic team during 1947-1949.

The stubby fighter makes an excellent scale control-liner. Our model was scaled directly from Grumman drawings, so accuracy is assured. Scale is 1 in to 1 ft, giving the model 35-1/2 in wingspan. The drawings show the model set up for the Navy Carrier Event and this extra gear makes a fairly heavy ship. The original model weighed 45 oz. This may seem high, but the big O&R .60 in the nose hauled it around handily and most vital, furnished the power needed for good slow flight handling.

The slow flight phase of carrier flying is felt to be the most important, so the model was designed for best efficiency here. The ship is balanced exactly at the 25% chord line, stabilizer and elevator areas are increased slightly and the thick lifting airfoil of the big ship is retained. Line leads are angled back slightly, bellcrank is mounted low in fuselage and outer wing tip is weighted to make sure the model stays out on the end of the lines when flown slowly in any wind. Here again weight helps, because the model just bores through the wind and flies steady as a rock.

The plans include many scale items that were not on the original model, but could be added if a strictly flying scale job is to be built. There are a few changes that should be made for this type of flying. First of all the big .60 engine would not be needed since battery and ignition system weight would be eliminated if glow plug engine was used. The smallest engine usable would be .29 displacement, with .35-.45 preferred. Tail weight should be kept as low as possible. Built-up 1/16 sheet covered tails and omission of hook gear in tail would solve this problem, so that balance could be retained with lighter engine. Landing gear wire could be 3/32 dia instead of 1/8 dia shown. Further lightening could be achieved by using 3/32 skin on fuselage rather than 1/8 shown.

Start with the wing since this must be joined to the fuselage before the latter can be completed. Make up the wing skins from 6 in wide 1/16 sheet if obtainable. If not, butt-edge-cement 3 inch sheets to needed width. Mark off rib positions on what will become the wing top skin. Cement ribs in place, starting at tips and working toward center section. Make wings in two halves. Bevel one edge of leading edge stock to fit against skin and rib ends snugly, and cement in place.

When dry, bevel the other edge to follow curve of rib ends on lower surface. Cut out 1/8 plywood spars and bend landing gear to shape. Slide gear through spars and bolt with 'J' bolts, then slide spars into place in rib slots. This will join wing halves. Add 1/4 in triangular gussets at spar-rib intersections as shown. This will add considerable strength..."

Update 12/09/2019: Replaced this plan with one laid out more clearly. It's exactly the same plan, but have rotated the wing section through 90 degrees now, to make it easier to read. 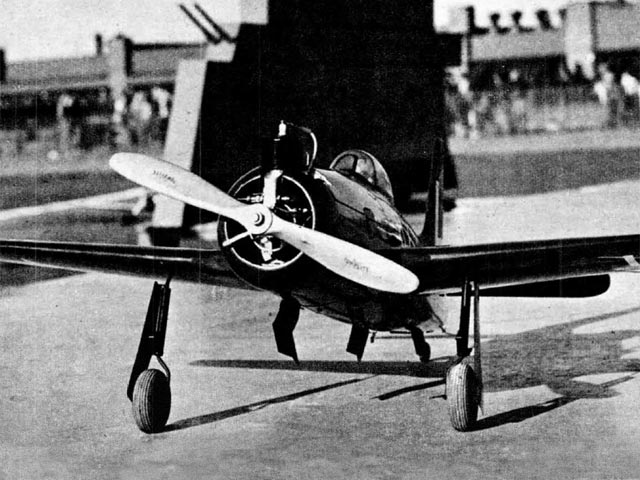