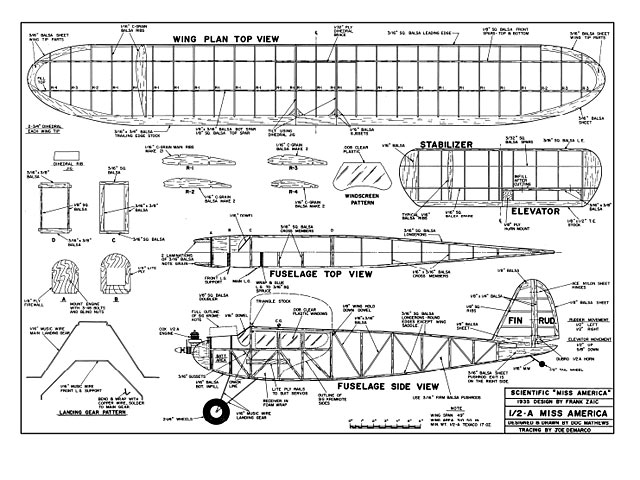 The original Frank Zaic Miss America (oz5645) was F/F from 1935. This version is for radio control 1/2A Texaco class designed by Doc Mathews. Wingspan 49in, wing area 310 sq in.

Quote: "I WAS LOOKING at an October 1936 copy of Model Airplane News from my collection. Among the items listed under Charles Hampson Grant's name as editor on the contents page are "Building the T-D Coupe (oz1812)," "Gas Lines," "Ways and Means of Gas Model Success," by Joe Kovel, "How to Build and Fly the SOC-1 Scout (oz1174)," by Bill Winter, and "A Soaring Glider," by Alan Orthof. Across from the contents page is an ad from Scientific Models, 218-220 M-10 Market St, Newark, NJ. The feature of that ad (and others like it which ran for many years) is the subject of this article.

The top half of that ad is for the new Miss America kit. The large type banner states: "The only complete low-priced Gas Model kit on the market that is guaranteed to fly. Now everyone can afford to build a gas model easily and efficiently." The kit had been introduced in July 1936. Nowhere in any ad for the Miss America that I can find is the designer's name mentioned. This is not peculiar to just this kit, however. Berkeley Model Supplies' ad has no mention of Ben Shereshaw as the designer of the Cavalier or Bill Effinger of the Buccaneer. No credits are shown for the Modelcraft Corbin and Scout, Burd's King Burd, nor Aircraft Industries' California Chief.

Incredibly, those were the only Gas models advertised in that issue. More engines than models were shown. Forster Little Hercules, Brown Junior, Bunch Mighty Midget, Fergusson Condor, Baby Cyclone, and even G.H.Q. ads were included, but kits for those newfangled Gas models were few and far between.

Obviously, the Miss America was a very early kit in many more to follow of what we now call Antiques and Old-Timers. To imply a guarantee of flight was very novel to say the least! Scientific Models was placing a lot of faith in the design and development work by Frank Zaic. They had good reason: Zaic had already established himself as one of the hobby's premier engineers and chronologist of scientific progress with his classic Junior Aeronautics Year Books.

Frank Zaic and his brother John had been building models since 1926. Of modest means, the brothers first published a Model Airplane Guide and Log Book in 1932. This was a combination of ruled pages for recording flights and observations, together with plans and helpful hints. Although the brothers sold a few copies, the income was less than handsome. Frank continued to work as a draftsman for patent attorneys, but as the depression came on strong, less and less work, was available—giving him more time to work on a 1933 version. This was printed by the brothers in their modest flat for a total cost of $17.00, and enough copies were eventually sold at 25c to show a modest profit. From this meagre beginning the JASCO company grew, and with it the legend of the Year Books by Frank Zaic..." 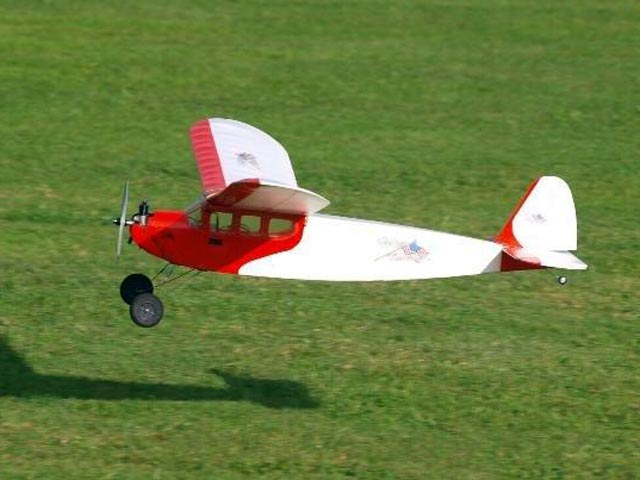 Here are some shots of oz2124, the Doc Matthews drawn 1/2A Frank Zaic Miss America [more pics 003-007]. I'll send more pictures when I get the windows glued in. Some of these are "in the bones" shots, prior to any electronics or covering. The others are shots of it completed, minus final gluing of empennage, and installation of windows. Once I get that done, I'll send some more pictures, and maybe even a link to a flight video. Thanks for such a great site. Cheers,
Kris - 24/04/2017
Hi Steve and Mary, I now have a video of the Frank Zaic Doc Matthews Miss America. Here's a link: www.youtube.com/watch It's a very nice flying plane. Thanks again for running Outerzone, it's a spectacular site!
Kris - 22/05/2017
Photos of my Miss America model [main pic, 008-011].
DieterF - 14/10/2020
Add a comment