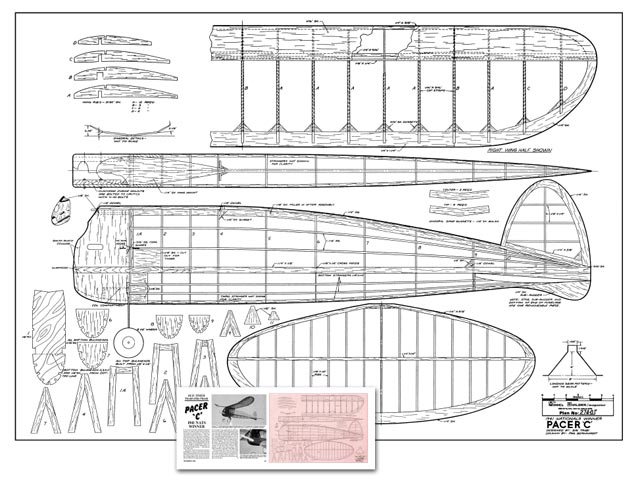 Originally published in MAN Feb 1942. This here is a later re-drawn version printed in MB Nov 1989.

So many of Sal Taibi's designs have been famous, it's hard to pick one out and say that it was his 'most famous.' However, if you add to that description, 'the one which was built by the most modelers,' then the Pacer just might move out in the lead. Of course, this statistic was helped along by Bay Ridge Model Airplane & Supply Company, which kitted both the 'B' and 'C' versions. Incidentally, those kits sold for $3.95 and $4.95 respectively, including Streamlite wheels - oh well, eat your heart out.

The Pacer owed its beautiful transition and glide to a most unusual aerodynamic freak. With practically a zero nose moment, the balance point came out just ahead of the trailing edge of the wing. As a result, Sal found that in his larger prototype Pacer, the transition was usually about a 100 foot dive into the glide! The wing simply could not overcome the effect of the huge lifting stab. One day, in desperation, Sal inverted the stab, added positive incidence until he got a floating glide, and there it was! Sal still considers it the best thermalling ship of all of his designs.

The second prototype, the Pacer 'C' shown here, incorporated the inverted stab and was simply a smaller version of the first Pacer. Normal flight pattern is right circle under power, wide right transition, and then a left glide turn.

The prototype 60 inch Pacer won the 1941 Nats Class C Gas event, and was powered by a Vivell-made Comet 35. It was later lost for ever at Langley Field, Hampton, Virginia, where Sal spent four of his years with the Civil Service."