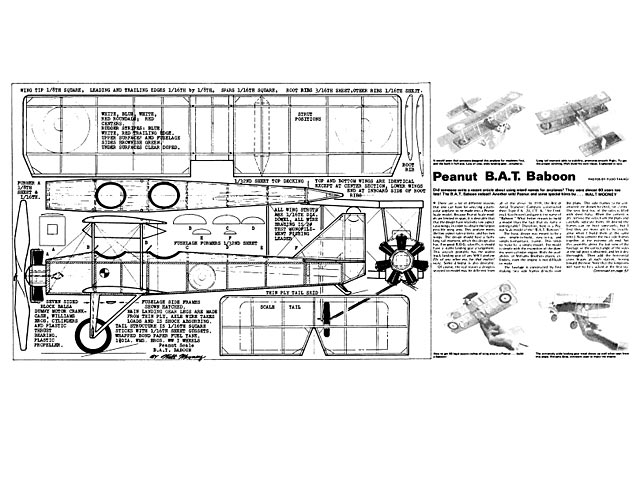 Update 12/06/2020: Replaced this plan with a clearer copy (also added article transcript), thanks to JanNovick.

Quote: "Did someone write a recent article about using weird names for airplanes? They were almost 60 years too late! The BAT Baboon indeed! Another wild Peanut and some special hints.

There are a lot of different reasons that one can have for selecting a particular airplane to be made into a Peanut Scale model. Because Peanut Scale models are limited in span, it is desirable that that the design has relatively low aspect ratio wings, in order to obtain the largest possible wing area. This airplane meets the low aspect ratio criteria, and has two wings. The design should have a fairly long tail moment, which this design also has. For good ROG takeoffs, it should have a stable landing gear arrangement. This aircraft probably has the widest track landing gear of any WW I airplane (or of any other era, for that matter!). Some dihedral is also desirable.

Of course, the real reason a design is selected to model may be different from all of the above. In 1918, the British Aerial Transport Company constructed their Type FK 24, (FK for Frederick Koolhoven) and gave it the name of 'Baboon.' What better reason to build a model than the fact that its name is unforgettable? Therefore, here is a Peanut Scale model of the BAT Baboon.

The basic design was meant to be a very simple-to-build, easy-to-rig, and simple-to-maintain trainer. This tends to make for a simple model. The model is simple with the exception of the dummy seven cylinder engine. With the availability of Williams Brothers plastic cylinders, even the engine is not difficult to make.

The fuselage is constructed by first making two side frames directly over the plans. The side frames to be constructed are shown hatched, for clarity. The very first bay of the sides is filled with sheet balsa. When the cement is dry, remove the sides from the plans and carefully separate them. (If desired the frames can be built separately, but I find they are more apt to be exactly alike when I build them at the same time.) Now cement the two side frames together at the extreme aft end. Set this assembly above the top view of the fuselage so the correct angle of the sides at the tail post is obtained, and let it dry thoroughly. Then add the horizontal cross braces at each station, moving toward the nose. Note that the longerons will have to be cracked at the first station forward, in order to give the sharp corner. Everywhere else, the longerons will bend enough to take care of their change in direction.

When the basic box structure is complete, the top formers, “A” through “F” can be added. Cut the 1/8 sheet bulkhead, “A,” and cement it into the nose of the box so it is just flush with the front end. Use soft, flexible 1/32 sheet balsa to cover the upper deck of the fuselage, and carefully cut out the cockpit openings. Add 1/16 by 3/16 cross braces across the bottom of the box at positions in line with “B” and “B”. These are cemented to the normal 1/16 square cross-braces and to the uprights and will provide some structure between the roots of the lower wings.

The horizontal and vertical tail are simple structures, built directly over the plans using 1/16 square sticks and corner gussets cut out of 1/16 sheet balsa. Remove from the plans and carefully

sand the outlines to a half rounded section. Don’t omit any of the gussets; they are essential for keeping covering wrinkles from occurring.

The wings are conventional structures using notched ribs, leading and trailing edges, and two top surface spars. The tip pieces are 1/8 square balsa. Again, note and install the gussets. Cut four root ribs from 3/16 sheet (or cut out twelve from 1/16 and laminate them three at a time to give the correct thickness). Cut out twenty-one of the regular ribs from 1/16 sheet.

Pin the leading and trailing edges to the plan. Cement the ribs in place. Cement in the tip structure and the gussets. Add the two spars, by cementing them into the appropriate notches. After the cement is dry in the rib notches, cut the spars to exactly fit at the tips and cement them in place. The spars should be flush with the top of the tips.

The lower wings end just at the inside of the root ribs. The top wing has a centerline rib. This is cut off even with the back of the aft spar and a triangular cross-section piece of balsa is used to fill in between the root ribs. The dihedral break for all wings is located at the outside of the thick root ribs. Carefully cut the outer panels free of the roots and reassemble the wings with 5/16th inch dihedral under each tip. Taper the ribs to give a good fit.

When the cement is dry, sand the leading and trailing edges to the rounded and tapered cross-sections shown. Wing tips are also rounded.

Use lightweight tissue for covering all the components. To get an approximation of the right color for the upper surfaces I used “Brown” and “Olive Green” RIT dyes, dissolved in rubbing alcohol, to dye a sheet of plain white tissue.

To dye tissue, you first have to make a frame to hold the sheet that is to be dyed. Cement one together out of 1/4 by 1” or similar balsa, like a picture frame, and cement your sheet of tissue to it. Pull it as tight and smooth as possible. Then spray the dye onto the tissue as evenly as you can. If you have no spray gun, it may be possible to dye the sheet using a cotton wad wet with dye, but much care will have to be exercised.

After the parts are covered, use a light fog of water to tighten the tissue. A single coat of clear dope (thinned about half and half with thinner), was applied all over, and then a second coat was applied to the fuselage. If you can get decals for the insignia, use them. If they aren’t easily available, now is the time to paint on the roundels.

Assembly of the major components can proceed after the struts are made up. The struts on the BAT Baboon are of round cross-section, not streamlined, and can be made from lengths of 1/16 diameter dowel. Drill a small diameter hole through each end of the struts. This hole is used after assembly of the wings to facilitate the installation of the rigging. Cement the tail parts in place on the fuselage. Now cement the lower wings to the fuselage sides. Make sure they are accurately in the right place, and block up the tips to give the correct dihedral. Cement the four cabane struts in place on the top of the fuselage. A small hole will have to be cut into the top decking to accommodate each strut. Note that the rigging holes should be arranged to line up in a span-wise direction. Now carefully cement the top wing in place on the cabane struts. Look at the model from directly above and make sure the top and bottom wings are aligned.

When the cement holding the struts in place is dry, install the rigging using 2 pound test monofilament fishing leader to represent the wires. Drafting tape is handy to hold the loose ends as the rigging is threaded through the holes. When all the rigging is in place, check the wing alignment and get it correct. Then put a small drop of cement at each of the strut holes to hold the rigging permanently. When dry, trim off all the overhanging ends.

Cut the tail skid and the two main Ianding gear legs out of 1/32 ply. Bend the main gear axle from 1/32 diameter music wire. Cover the inverted “V” portion of the wire with 1/16 diameter spaghetti tubing to give the axle the right diameter. Cement the wire in place in the bottom of the fuselage. Add a filler to the bottom of the first bay of the fuselage to reinforce it. Cement the tail skid in place. Slip a wheel over each end of the axle wire and cement the gear legs in place on the bottom of the lower wings. A washer and a drop of cement can help retain the end of the axle in the leg.

Now make up the dummy engine. The crankcase is a piece of block balsa with the grain parallel to the airplane center line. Use the front view to get the seven sides accurately carved. Cut the square hole to fit the thrust bearing. Install the cylinders by making a hole to fit the base of each cylinder exactly in the center of the seven faces. Add a circular balsa cylinder head to each one and use cut-off straight pins to simulate the valve lifter rods. Much more detail can be added to this engine if you have access to a copy of the 1919 Janes, which has a picture of the engine, as well as the three-view of the BAT Baboon.

The fuel tank is wrapped up out of three pieces of bond paper. The ends can be carved from block balsa, and the center can be wrapped out of bond paper. Paint it silver and cement it in place on the wing.

Before flying your model, make sure it balances somewhere near the CG shown on the plans. Look at the wings and make sure that you have about 1/8 inch of washout at each tip. This can be instituted by holding the wings in the correct position and holding the airplane over a source of heat which will shrink the loose wires and hold the wing permanently twisted with the correct washout. Too much heat will break the wires, so hold a bare hand between the heat source and the model. When it hurts, remove everything from the heat source.

This is a rather large, draggy model for a Peanut Scale, and it requires a bit more rubber to fly than you might expect. The original was powered just about right for outdoor flying with a single loop of 3/16 Pirelli, about 12 inches long. Have fun." 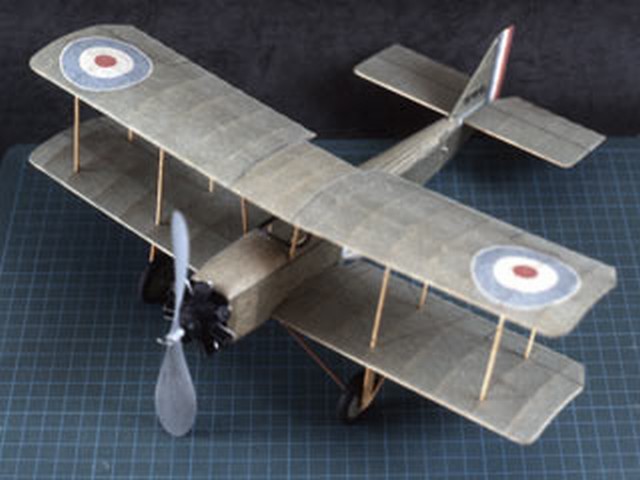