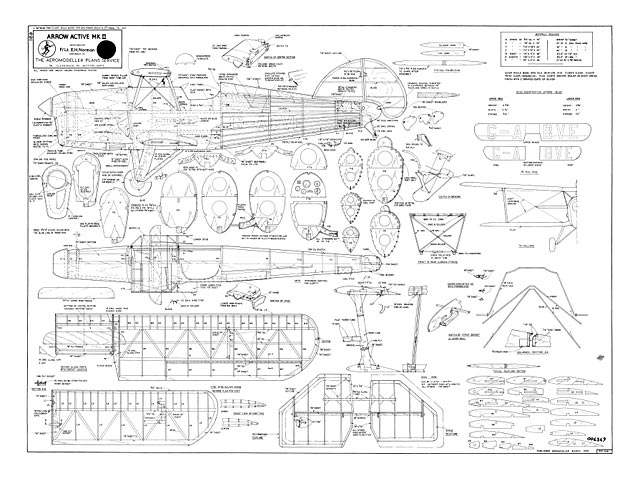 Quote: "This delightful silver biplane which collected prizes for Flt Lt Norman at the RAF Championships and All Britain Rallies last season is one of the prettiest models we have ever seen. The full-size Arrow Active Mk II was developed from an earlier version which has a solid centre pylon carrying the upper wing. Designed by AC Thornton who also designed the famous Blackburn Bluebird, it was flown in the Kings Cup for 1932 (unplaced) and in 1933 (5th) by Flying Officer HH Leach. The diminutive span (by British standards) of 24ft and generous power developed by a DH III gave it a top speed of 145 mph and it is very pleasing to note that in spite of its age, it is currently being renovated at Croydon. Hopes are high that it still be seen at the 1958 Aerobatic Contests and Air Races.

The model has a fairly high wing loading and does therefore need a minimum of 1cc power. Displaying inherent stability with offsets and surface angles as detailed on the plan, it is the perfect scale subject for the perfectionist. As will be seen in the photos here, the original model duplicates the full-size ability to fold its wings for storage and construction is virtually rib for rib, and lace for lace on the fabric-covered area of the
fuselage.

Only deviation from scale is in the tail area which has been increased; again for the perfectionist we have provided precise scale tailplane details, so that those with the ability to trim out the difficulties incurred by the smaller tailplane can be satisfied with a perfect scale model. Fuselage construction is based on a horizontal crutch and the multiple scale-like stringers provide a high degree of strength.

The original model has a nose cowl made from glass fibre and despite the prangs during the initial trimming stages, finding out details for the plan opposite, it survived everything with hardly a scratch. Colour scheme is all silver with dark blue trimming and registration and the arrow trade mark printed above should be duplicated on either side of the fuselage."

Update 09/10/2018: Replaced this plan with a clearer copy thanks to DBHL, theshadow. 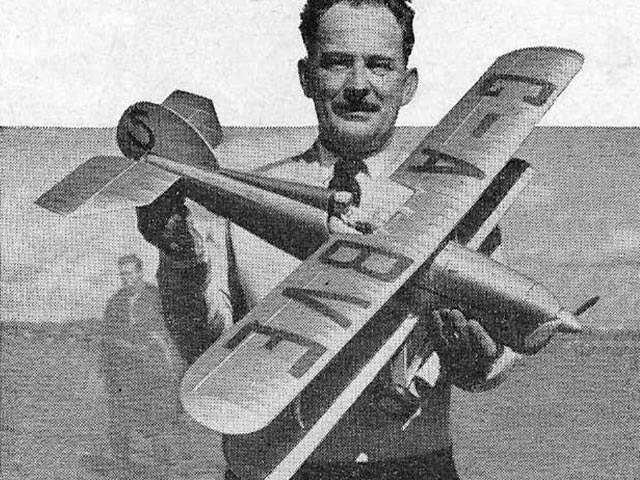 I know this is a long shot but: Does anyone know if the "rib for rib accuracy" claim for this plan is true? The wings are not as they are on the real one and haven't been at least since it's rebuild in 1958.
Colin H - 15/01/2022
Since the model was created before 1958, one would assume that no matter how much the wings have changed, the model reflects that 'as built'
Ted Avey - 16/01/2022
I too was prepared to believe the author might know best and build it as per the plan. Then yesterday I watched a Pathe news film of the 1932 Kings Cup air race. There's a nice clip of the Active Mk1 taking off. As the camera, from an elevated position, pans to follow the take off run, the whole right hand wing of the Mk2 comes into shot. I wanted it to look like the plan, but it didn't.
If you are interested it's on Youtube titled "Our most coveted air trophy"
Colin H - 17/01/2022
I did look at the clip, but that is the Mk I, and not the Mk II modelled.
Ted A - 17/01/2022
Yo. The machine taking off is the Mk1. The starboard wing of the machine on the ground, that comes into view at about 1min 12 is that of the Mk2. It's only there for the blink of an eye so freeze frame at 1mim 13.
colin H - 18/01/2022
The view of the wing in the You Tube clip certainly indicates a different rib pattern from that shown in the model plan. However, the Aero Modeller article only claims that "construction is virtually rib for rib", not actually rib for rib. It also states that the tail area has been increased but that a scale outline has been included for the perfectionist. Presumably the rib pattern could also be corrected by the said perfectionist if that was the main objective of building the model.
Skippy - 18/01/2022
All things considered, I think mine will be an Arrow Active Mk3.
Colin H - 19/01/2022
Add a comment