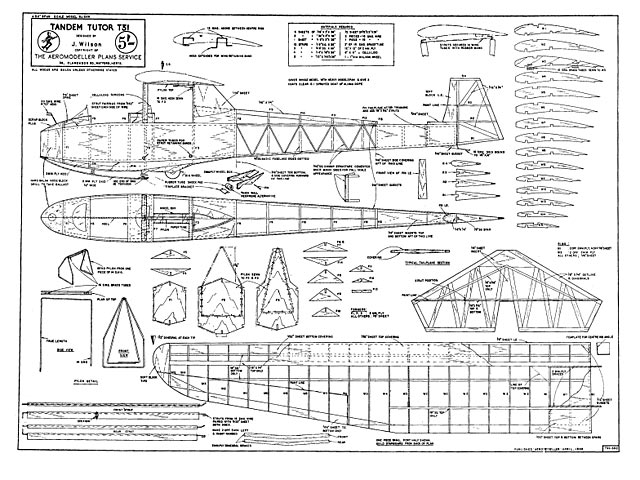 Slingsby T-31. Scale free flight towline glider. From Aeromodeller April 1958. This glider known in the RAF as the Cadet.

RETURNING BACK TO his farm in Falkirk from a holiday gliding course at Cairnbulg Aerodrome near Fraserburgh, last year, John Wilson decided that the Tandem Tutor in which he enjoyed so many hours of flying, was the ideal subject for a flying scale model. Living on a farm, with no space or transportation problems he made it with a one-piece 54 in wing, and the result is seen in the two photos at the foot of this page. Construction is as near as possible made to duplicate that of the full size which, incidentally, is known in the RAF as Cadet 3.

Those who have closer association with the single-seat Tutor will be able to convert the fuselage by eliminating the rear cockpit. A high proportion of the gliding clubs offering holiday courses are equipped with the Tandem Tutor and we are sure that Mr Wilson's design will be popular with those who learn to glide during the corning year.

The basic 1/8 square fuselage sides are built over the plan as shown in chain clotted line and the wing mounting pylon frames fitted to F2, F3. These formers arc then used to key the two sides together, other spacers and formers added, then the 1/16 in sheet overlaid and 1/16 in square dummy Warren braces fitted to reproduce the full-size construction.

The nose block should only be rough shaped before fitting to the front face of F1. No separate wire towhook is necessary as the end of the dummy nose skid comes conveniently at the correct position and is a most effective hook. Provision is not made for an auto rudder, but as this is not intended to be a high performance model, one should be content with the occasional premature release.

The tailplane is slightly enlarged over scale in order to improve performance and is a very simple construction, being flat plate 1/8 in x 1/4 in frame..." 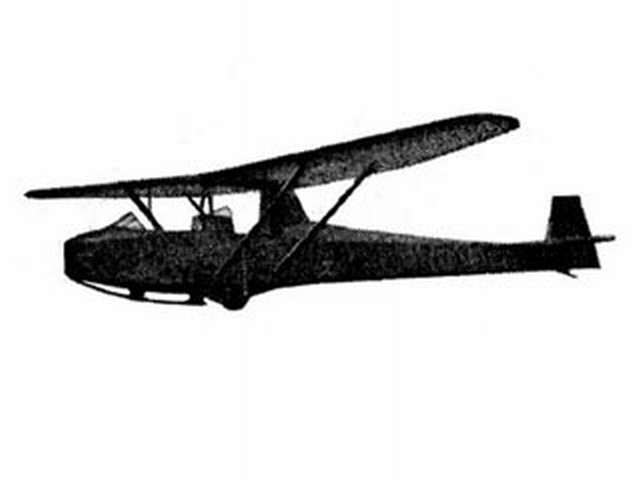 I drew these plans in the late summer of 1957 and had them published in Aeromodeller in the spring of 1958. I remember being very pleased to see it in print and being paid the sum of 7 pounds, 7 shillings for it. I still have the magazine and the complimentary plan that Aeromodeller sent me. The model was as accurate as I could make it from the information I got from Slingsby. It flew - in a straight line down the gentle slope of one of my father's fields and did survive a number of flights. In later years I did think of enlarging the drawing for r/c but there was always some other project that came along and demanded attention. I was pleased to see that my work of all these years ago was still available and that your web site still promotes old fashion modelling traditions in the present times of ARTF models.
JohnWilson - 06/08/2012
I built a model of this from M.A.P. plans in 1964 and remember well the first flight. After adding four (imperial) pennies as noseweight for balance, a beautiful straight and very gentle descent of something like 100 feet was achieved even though launched only from shoulder height. I think this aircraft has very elegant lines.
JohnT - 25/09/2017
For me, this plan is a wonderful blast from the past. In 1956, when I was a cadet NCO in the Herbert Strutt School CCF, I got my A & B gliding certificates in one of these aircraft, registered XE799. The following year I built a 1/8 scale model of XE799, but I never actually flew it. My design had some structural issues and the model came out far too heavy as well. With that combination of problems it was safest to keep it as a display model. What eventually became of it I do not remember. In recent years there has been a lot of interest in XE799, which I understand is now owned by the museum at Lasham Gliding Centre, where it is being restored. It is said to have been flown at one time by none other than Johnnie Johnson while he was station commander at RAF Cottesmore. I only learned of that connection in the last few days. I am quite amazed to think that I once flew an aircraft associated with a famous WW2 ace. Somewhere among my vast collection of old photos I may still have one I took of XE799 using my Dad's Ensign box camera in 1956. If I manage to find it I will scan it and let you have a copy.
TonyBrookes - 09/11/2017
I think the museum Tony is referring to is the Gliding Heritage Centre at Lasham Airfield.
Mary - 09/11/2017
Add a comment