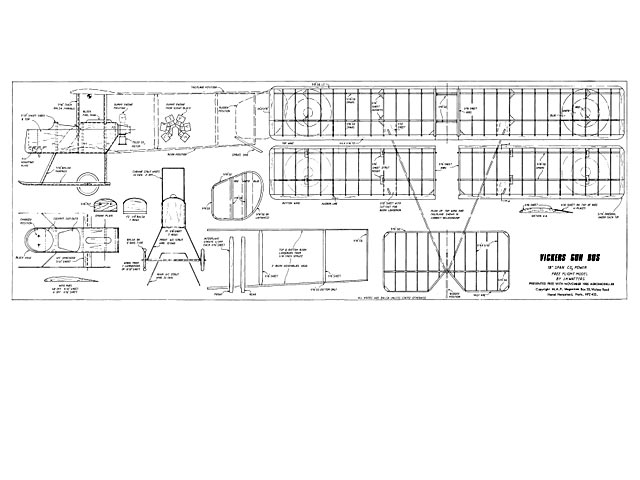 THE F5B (Fighter Biplane 5) designed and built by Vickers Ltd., first entered service with No.11 Squadron RFC in February 1915. Although not one of the fastest or most manoeuvrable aircraft of the time, for a few months after its introduction, it did useful work both in aerial fighting against the Fokker Einddecker and in light bombing duties. As better known German fighters began to appear on the battle fronts, the surviving F513's were relegated chiefly to training duties.

Having an interest in First World War aircraft and having built some of the more conventional types, the idea of building a pusher scale biplane model was for me, a new venture. As a model the 'Gun Bus' looked to have good area proportions, and not too difficult a structure.

This model is in fact the second F5B I have built, the first one was completed but never flown, due to it meeting an undignified (catastrophic) end at the hands (or paws) of our pet cat. This partial destruction did in fact show up a few structural weaknesses. Not surprising, I hear you cry but the damage sustained was similar to that which could have occurred during a heavy landing or even careless handling. What it did prove was that with this type of model, selection of wood and fuselage boom design was important. As you will probably be able to see from the photographs, the structure that did survive was re-used to complete the model.

Fuselage. Construction for the fuselage should start by first bending to shape, from 22 swg wire the cabane and undercarriage wires. Cut out the fuselage formers, F1 and F2 from 1/16 in sheet and 1/8 in sheet respectively, The fuselage sides and bottom should be cut from 1/32 medium sheet balsa.

Assembly of the body should begin by attaching the undercarriage wires, onto the bottom of the Fl formers. The method I used was to simply fix them in place with masking tape, without using any glue. Former F1 can now be glued into position on the fuselage bottom sheet and allowed to set. Both fuselage sides should next be glued into position and former F2 added. Next add the nose section onto the body, which can either be built up out of pieces or from a block.

Assembling together the undercarriage legs is not as difficult as it may look. With the aid of thin fuse wire, or thin wire stripped out of electric cable, bind the ends of the undercarriage legs onto the skid wire. Complete both sides, and with the structure sitting flat on a board making sure all is square - solder the joints. Complete the structure by binding and soldering the axle in place. The whole assembly you will find is quite strong, but with a slight amount of springing. The cabane strut wires can now be glued in position onto the inside of the fuselage sides. Use pieces of scrap balsa to keep them in place whilst the glue sets.

Now cut out the engine mounting plate from 1/16 plywood and drill the plate to take the 10BA fixing bolts. The engine plate should now be glued in position, using either masking tape or elastic bands to hold it while it sets.

The motor assembly can now be fitted, take your time over this -I needed a few attempts to position the tank and pipework satisfactorily. Fitting the charging valve onto the plywood plate is an option..."

Article pages, text and pics, thanks to StuartBurling. 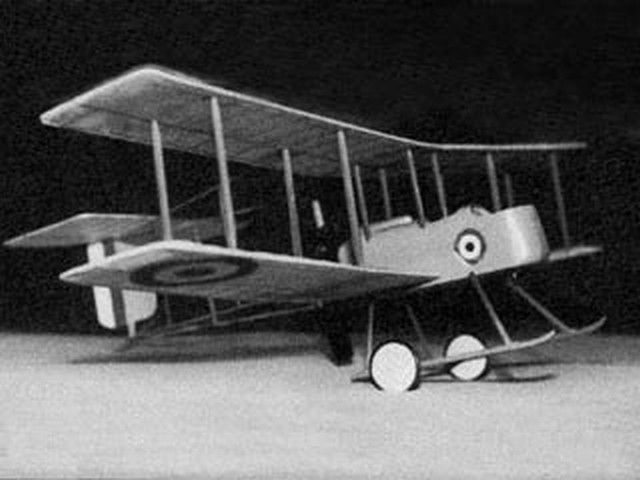