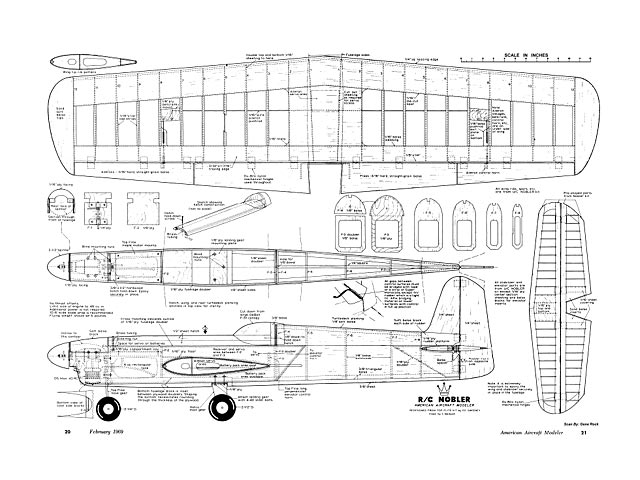 Quote: "Conversion of a great control-line stunter makes for a new kind of precision flying. RC Nobler by Ed Sweeney.

FOR years R/C enthusiasts have thought that a converted control-line model would be a fine radio model. They are right. Some recommended using flaps coupled with the elevator function, as in control-line flying, on a conventional model, and they are right. Fulfilling these conditions, the R/C Nobler has all the great characteristics of its line-bound Nobler (oz6212) ancestor.

Using only a 40 R/C engine (about as much power as the non-throttled 35 control-line engine), with a wider, slightly longer fuselage, and the control-line flap area split for independent ailerons and flaps, it has a constant-speed, true neutral stability, and unsurpassed smoothness in flight.

Design changes from the control-line Nobler kit were made only to accommodate equipment installation, a throttled engine, clunk-type fuel tank, and new fuselage structure with extra tail length.

Relatively uniform flying speed is an important factor in the success of a control-line stunt model. In CL flying, control is direct through the wires, so that an always predictable, constant response is available for accurate maneuvers. The same is true of radio flying. In Noblers, the airfoil regulates the air speed through maneuvers between 55 and 70 mph. Although the weight of the model is a factor in controlling speed, both the control-line and radio versions fly at nearly the same speed. This R/C Nobler weighs about 5 lbs.

Smoothness is the ability of the plane to slice through maneuvers gracefully. Noblers and other control-line models with coupled flaps and elevator fly smoother than their counterparts without flaps. Why are they smoother? The required angular rotation of the plane to accomplish a given radius of pitch response is significantly reduced because the relative lift of the wing is variable during the pitch change. While any lift increase increases drag, changing the lift characteristics of the airfoil of the wing is less draginducing than just pitch rotation and, hence, the plane does not slow down as much, or rotate as much, in performing, for example, a loop or a sharp turn. However, use of too much flap deflection will cause too much drag and the opposite effect will result. The advantages of coupled flaps is a smoother flight path. This will gain points at a contest.

Another important characteristic of the Nobler is its true neutral stability. The model has no dihedral, no incidence, no thrust off-sets, and a perfectly symmetrical airfoil. The natural aerodynamic traits, in addition to the above factors, produce a model which will remain in almost any attitude it is put into. For example, one can establish a 20- degree bank turn with a touch of up trim and leave the plane alone. It will not spiral into a dive or roll out, but will keep circling until you fly it to another position. True neutral stability requires much less effort by the pilot to set up and perform the stunt maneuvers.

Maneuverability also is helped by the smoothness and constant flying speed of the Nobler. It performs all of the FAI and AMA Class-C and free-style stunts. Its roll response is excellent at all speeds. We found that it tends to yaw into turns slightly with the direction of applied roll - this is a distinct benefit in achieving axial rolls and easier landings. Four-, eight- and six-teen-point rolls require almost no down-elevator during inverted portions, and top rudder is not really necessary either. Knife-edge flight is a ball; one can literally cross the entire field with the wings perpendicular - make a quarter roll from level flight and apply full top rudder. The square cornered maneuvers are easy. When one sharply deflects the elevators (and flaps), the plane will make an equally sharp response and without losing much air speed. Corners of the top-hat and square verticaleight are clearly defined.

The airplane also spins well. Rotation is fairly slow and recovery is instant. It helps to add aileron in the direction of the spin to get the rotation started. Snap-rolls come off with no strain and they are also reasonably slow in rotation. The clue to spins and snaps in the Nobler is having a big sharply deflected rudder to offset the stability effects of the flaps at up-elevator command.

Landings and takeoffs are unlike any other R/C model. Takeoff needs only a small, graceful rotation when flying speed is gained. Yank it off, and it jumps into the air, fully under control, no wingdropping, no spin danger, no dangerous mushing. Because of the relative wash-out effect of the wing tips when the flaps are deflected in up-elevator command, the plane will never unexpectedly drop a wing tip at any flying speed, even during a stall. Because of this characteristic, landings are best made with up-elevator trim. Throttle back to just above idle, apply up-trim and let the model settle to a landing in a level flight altitude - hands off! We mean with the hands off the control sticks! Wing tips are fully stable, and its altitude is fine for landing evenly on the main wheels. The plane will not gallop or wander during the approach. This kind of landing is safe for beginners too. You experts, can drag it. Remember, the Nobler will stall cleanly power off, but with just a little added power it won't stall.

Fuselage: The structure is designed with two ideas in mind. First, it must be capable of withstanding all bad landings and near crashes in spite of the forces applied through the wing, which is permanently mounted in place. Second, it must be self-aligning during construction. These goals are accomplished when gluing the nose unit to the fuselage sides. The overall structure was designed by an aeronautical engineer. You will never break it unless everything is totally smashed!

First stage: The motor mounts are located in the firewall and forward bulkhead with rubber-bands. Screw in place the tank compartment hatch. Mount the nose gear and drill holes for the fuel tank outlets. Trim the motor mounts to fit the engine crank-case, drill the mounting holes, and bolt the engine in place. The fuselage doublers, triangular strips, rear doubler, and tail spacer are mounted on the fuselage sides with contact cement.

Second stage: Disassemble the motor mount unit and reassemble with epoxy glue, leaving off the tank and nose gear; but bolt the engine in place again. Don't let the tank compartment hatch be glued down. With lots of epoxy glue, mount the fuselage side assemblies to the motor unit, aligning the firewall and bulkhead with the top of the sides, and the maple mounts flush with the forward edge of the sides..."