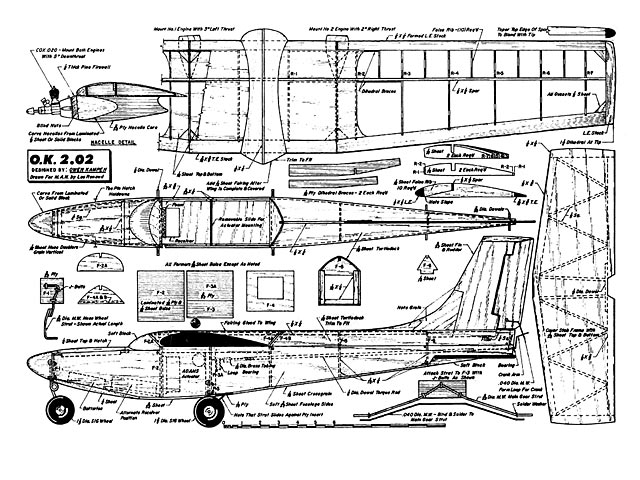 Quote: "The O.K. 2.02 was conceived to fill the need for a good looking, small, scale-type twin that would fly well without resorting to extreme design concepts or 'weirdo' configurations. This proved to be a larger project than first realized. At the time design work was started, I had neither seen nor heard of any existing .020 powered twin. This proved to he a boon, for I could start from scratch full of confidence and high hopes free of all helpful friendly suggestions as to why it wouldn't work. So I did.

To coin a phrase, 'It flew right off the old drawing board' - that is, until the left engine quit and I was never quite sure of what happened next. Carefully picking up the remains, I went back to the old drawing board and pondered the problems and immediately came up with the obvious answer - I'd make it a single engine 'twin'! Oh well! - at the time it seemed quite logical.

Now, after several months of shattered fingers, tempers and planes I, hereby, proudly offer the modeling fraternity the results of all this soul searching, suffering and self-denial along with some observations which stick fairly close to the truth. The first one, which is thrown in for free, is never, under any circumstances, mess with the little beasts in freezing temperatures - not even to meet a deadline.

In case it's not apparent from the photos, spell it right out and go on record as saying, 'I'm seriously concerned with the visual aesthetics of three dimensional form in design, as related to the classic precept that form follows function.' What this really means is that I'm a 'looks guy,' but one who believes a good looking ship must also fly well and that the nice appearance should be a logical result of built in fly-ability..." 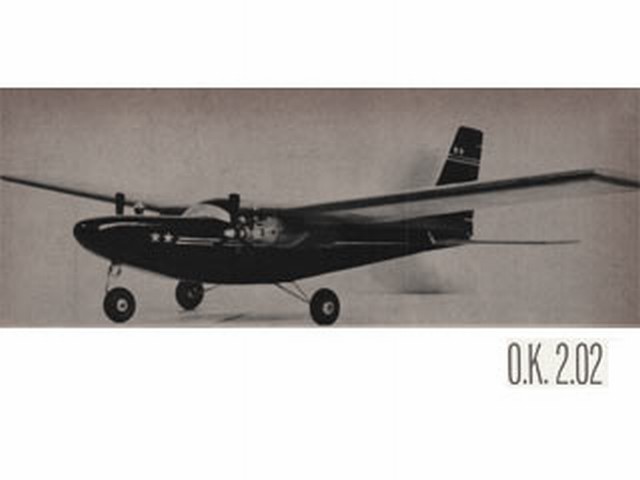