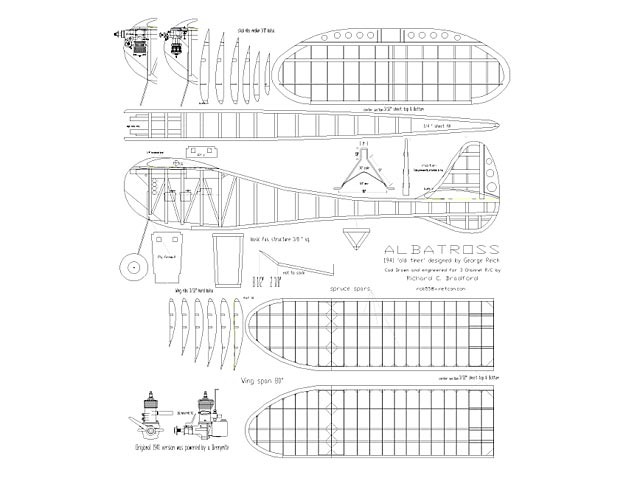 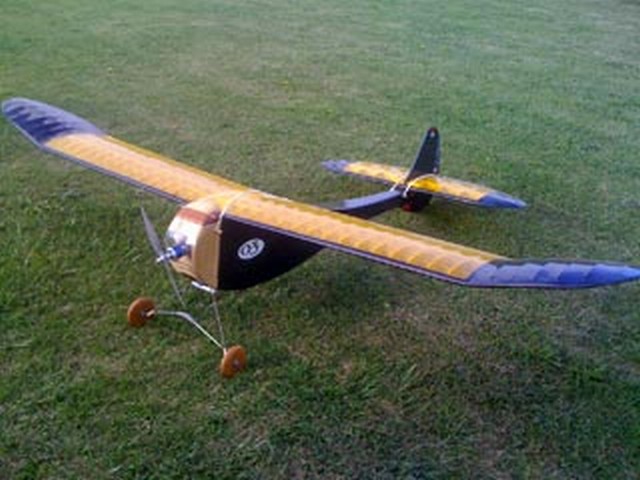 Thanks to Pablo Cipponeri for this photo of his electric version of the Albatross, with 90.5 inch wingspan [model photo].
Mary - 16/08/2016
I built this size Albatross back in 1989 as a electric powered plane. I don't know what I did, but could never get it to fly well. There was no problem with climb. It never did glide well. I still don't know what I did wrong! I got the plans from Model Builder magazine. I used astro flight 40 geared brushed motor with 18 nicad 1000 cells. I had heard the Albatross was an excellent glider. It looked really beautiful in red solartex covering. I could load the nicads vertically in the nose there was so much room up there! Maybe one of you guys out there will have more luck than me!
Anon - 19/08/2016
I suspect your glide problems with the Albatross were: it was just nose heavy. I noticed that the stabilizer was about 50% of the wing area, that means it probably needed to balance further back to glide well. I had the same problem with my Sparky. No balance point on the Comet plans, but another version showed it at 70% back. I didn't believe that so I balanced mine at 50% and it was waaaaay nose heavy, almost no glide at all. When I moved it back to 70% the glide was fine. One of our club members added a Cox 049 to his 2 meter glider and it had a good climb but glided like an F-104. When we added weight to the tail, all was OK again. With 18 nicads, yours was probably heavier than most of them back in the day. George Reich was Dick Korda's brother-in-law, a member of the Cleveland club, I can't believe he'd design a dog. I see a balance point on the plans. Don't believe it. So many of them are wrong. I know how it's done because I've done it. When the plan is first drawn, a balance point is attached to the plan as a guess, then after it has to be changed, the plans are never updated and it remains incorrect.
DougSmith - 20/08/2016
My point of view, this model need low angle of dihedral see in the photo, point of CG 50% , and 15% longer wing span. Regards, from Argentina
PabloCipponeri - 20/08/2016
Now I know.
Anon - 24/08/2016
Add a comment