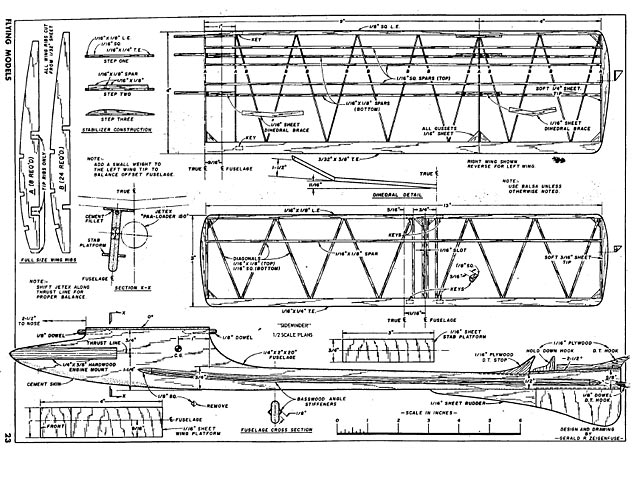 Quote: "The 'Sidewinder' is a unusual approach to the high power problem present on Jetex powered models. A closer look at the pictures and plans will reveal that the fuselage is off-center and not the side mounted Jetex unit. Apart from that, the Sidewinder is conventional in appearance and construction.

After several years of Jetex flying it became apparent to us that for best results the Jetex unit should be placed so that it is close to both the center of resistance and center of gravity. This was suggested by Ray Booth in an article in the September 1958 issue of Flying Models. This has been proven out as the plane is rock steady under power and runs as if on rails.

This meant that the Jetex unit would be positioned quite high on the fuselage and that the thrust line would be off-center unless we built a fancy fuselage around it. Competition models must be simple and functional and the fancy fuselage went out the window. We then decided to mount the fuselage off-center instead of the jet. Using a tilted tail for turn in the glide in previous models handled the power turn nicely. Using an off-center thrust line now would complicate matters. An added feature to this off-center fuselage arrangement is that the stabi-lizer assumes the proper tilt for a nice glide circle.

The Original Sidewinder had an ultra-thin wing which was discarded after several attempted flights and after the present wing was built it really began to perform. The only change after that was a reduction in rudder area. It does appear small but many test flights prove it must be as is.

All the important dimensions are shown on the plan to ease the job of scaling them up. All wood used is medium weight balsa unless specified otherwise. Take care to keep the weight of the finished model (including Jetex unit) between 2 to 2-1/4 oz.

Construction: Since the fuselage is quite simple, we'll start with the flying surfaces and then construct the fuselage, while waiting for the cement on these surfaces to dry..." 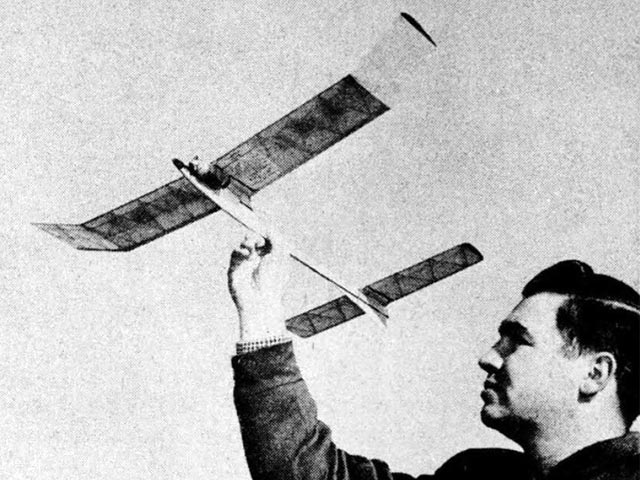