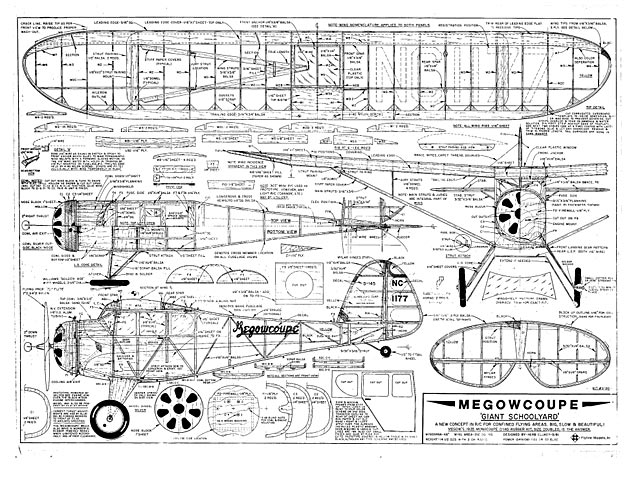 Flyline kit, based on an old Megows design.

Quote: "Electrifying the Flyline Megowcoupe. Putting a charge in an old favorite. By Don Srull.

The .05 electric motor is becoming the most popular and practical size for sport R/C models. Both Astro Flight and Leisure Electronics have several fine .05 motors in their lines of electric powerplants. The most widely used battery for these motors seems to be the six cell, 1.2 ampere hour (so-called sub-C cell) pack. Luckily, there are also many fine kits avail-able which are well-suited to .05 electric motors, and they offer an easy way for a newcomer to give electric a try. Two such models which I have successfully converted to electric are the all-foam, ready-to-fly Goldberg Ranger 42, and the Flyline Megowcoupe. We will briefly describe how our .049 powered Megowcoupe was converted to .05 electric.

The Megowcoupe is a 46 inch span, semi-scale model of the Monocoupe. It is a typical built-up stick-and-tissue design, and with 290 square inches of area it turns out to be a very light, slow flying model with an .049 glow engine. Ours weighed about 15 ounces with a Cox Golden Bee and small two channel radio for a very light seven ounces per square foot wing loading. It could be flown virtually anywhere. With the .05 electric and three channel radio it weighs about 30 ounces, so it flys and glides a little faster. It still is groovy and stable, and has a terrifically good glide. The only real limitation now is that we don't fly from high grass fields since the heavier weight and higher landing speeds would tend to damage the landing gear too easily.

To modify the Megowcoupe for electric we need to do three things - attach the motor, build a battery compartment, and add a third servo for motor on/off control.

The six cell battery pack is heavy (about 11 ounces), and must be properly secured within the fuselage. The 1/8 inch sheet balsa floor and 1/16 inch sides of the cabin area provided an ideal spot. One quarter inch square balsa and 1/16 inch plywood are used to construct the battery compartment and access hatch as shown in Figure 2. The access hatch on the fuselage bottom provides an easy means of removing or changing the motor batteries. The batteries can be slid into place and secured with a single rubberband.

A third servo to control an on/off micro switch will be necessary. The tiny micro switch can be attached to the servo with double-sided foam tape, or simply glued to it. The proper wiring of the motor, batteries, charging jack, and switches will be described in instructions provided by the manufacturer of your motor. However, a good and clear schematic was shown in Bill Winter's column in the March, 1983 issue of Model Aviation. I recommend you read it. Speaking of good info on electrics, I recommend you join the newly formed Society of Electric Aircraft Modelers (SEAM) to keep up to date on everything electric. To join, send ten bucks to SEAM, 11632 Flamingo Drive, Garden Grove, California 92644. You will also get the great SEAM newsletter, which is loaded with hints, tips, and practical info.

Back to the batteries; notice the small cooling hole in the fuselage bottom. It allows air to flow over the batteries and out the fuselage. Also, make sure that the hole for the motor in the firewall is a little larger than the motor diameter; this will allow cooling air to flow around the motor case. By the way, I found that a 7/4 wood prop was best for my model; but you should experiment with 6/4's to 8/4's.

Before you try a test flight, make sure the CG is still within the limits shown on the plans. If not, shift the radio batteries and/or add ballast. Next, trickle charge the motor batteries at about 100 mA for at least 12-14 hours the day before you fly. This will bring all the cells up to an equal, full charge. Use this charge for your first flight of the day, then use your rapid charger for subsequent flights, using the manufacturer's instructions. Make sure your radio works properly with the motor off and on.

If you have a smooth surface handy, let the Megowcoupe take off for its first flight. If not, ask a trusted friend to give you a running launch while you man the transmitter. Keep the climb-out shallow and straight until you are up 50 feet or so. Then feel the controls out with motor on and off; talk about low idle RPM! Remember, the Megowcoupe will want to fly and glide a little bit faster than the glow engine version and tip stalls can be a little easier to get into.

After a few quiet and pleasant electric flights it's easy to forget how it was before with the oil, the noise, and the hassle of flipping that little prop endlessly; and you sure couldn't re-start an .049 in flight for a go-around, could you?" 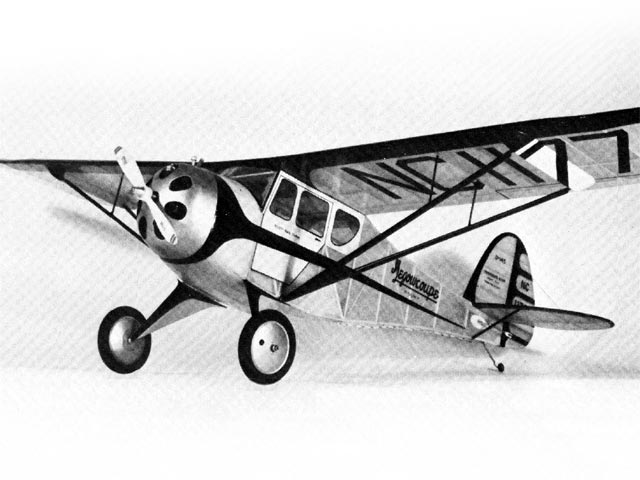