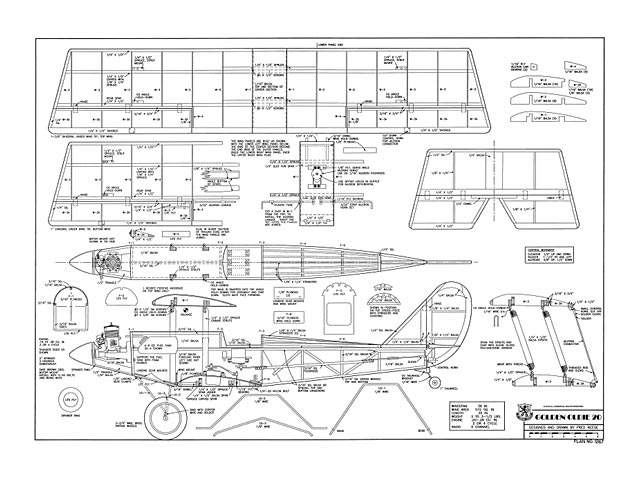 Quote: "The Golden Oldie 20 is a mix of a Jenny, a Waco, and a Travel Air, and represents the best of the roaring 20's. Let's go back to the days of grass fields, barnstorming, and the sound of the wind in the wires.

The old biplane are not at all like the modern biplanes. The Ultimates and Pitts Specials of today are aerobatic machines with symmetrical airfoils and powerful engines. The old aircraft had flat-bottomed airfoils and engines of limited power. They flew on their wings, not on the props. Lazy chandelles and barrel rolls are characterisic of the old biplanes. Lomchevaks and Humptybumps came much later.

As a model, the Golden Oldie 20 fares much better then the vintage aircraft because the model engines are much more powerful relative to the size of the airplane. Think about it, a Jenny only had 90 horsepower. Landing spered and full power differed by only a few miles per hour. The model can pull vertical and do a nice hammerhead or loop from level flight. I like both the old and the new aircraft; they are just different, The Golden Oldie 20 is at its best just boring holes in the sky and shooting landings. It just looks and feels right.

Biplane hardware and strut attachments are the old biplane's biggest problem. We want our models to be easily assembled and disassembled. We don't want to spend an hour at the field puttering around before we can fly. As a designer, I try to use readily available hardware whenever possible. The wing attachment on the Golden Oldie 20 may seem unusual, but it is simple and it works.

Goldberg angle hold-downs are screwed to the top of the cabane struts with the slots facing forward. Four x 1/2" screws are installed into the spruce wing joiners in the bottom of the wing aligned with the angle hold-downs. The top wing then snaps into the nylon hold-downs from the front. The wing cannot move up or backwards which are the flight loads. The wing can move forward as in the case of an impact, thus preventing the struts from breaking. The actual pull load on any of the nylon hold-downs would never exceed five pounds. The two prototypes have hundreds of flights between them with no problems. The top wings have popped off several times in rough landings, with no damage to the model.

The Golden Oldie is set up like the old biplanes with some positive incidence in the top wing. This produces a gentle stall but it also produces some climb at full power. Since I generally fly this model low and slow, only going to full power for loops and hammerheads, I don't mind the built-in climb at full power. Art Cummins, who built the red model, extended both wings one rib bay, increasing the span to 45 inches. With the increased wing area and lift, his model also required some positive incidence in the stabilizer, as the climb was excessive. He cut off the tail group and sanded the top of the fuselage to angle the stabilizer down at the hinge line. if you enlarge the wing, I would suggest 1° positive in the stabilizer.

The original Golden Oldie 20 had ailerons on the bottom wing only as shown in the photographs, but was later modified to have ailerons on both wings. Art's model also has ailerons on both top and bottom wings. The ailerons on the longer wings are the same as shown on the plan, both top and bottom. An additional W-2 rib is used to lengthen the inboard portion of the wing panels. The top and bottom ailerons are connected at the trailing edge by a vertical wire with a solder clevis on one end and an adjustable clevis on the other end; these mate to cut oft control horns. The aileron linkage is in line with the outboard struts..." 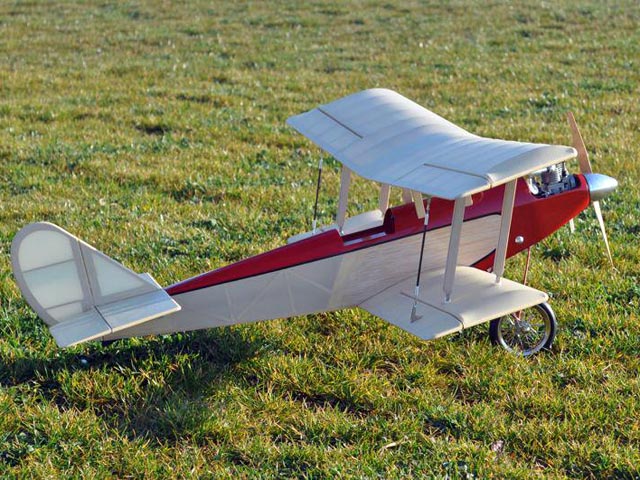