Quote: "DURING the 1949 Nationals at Fairlop the writer stood, watching one pylon job after another bite the dust as they tried to cope with the tricky breeze. More careful observation showed three main ways in which disaster overtook the unfortunate.

1. Straight over loop into the deck.
2. Attempted loop with turn, skewing into a spiral dive.
3. Straight forward spiral dive for no very apparent reason.

A loop appeared to start two out of three prangs, and my answer was to adopt a high-thrust layout. A high-thrust line, 200 sq in model was built, powered by an Amco .87. It became known as 'Lambles Folly' and looped perfectly. However, we flew the answer out of it and a twice size version was built for the Amco 3.5; named 'Battle-axe' and with a wing area of 600 sq in. It is now over two years old and still going strong.

Subsequent models were fairly small and highly powered. They were trimmed to a fast, shallow climb by using downthrust ; but they proved inconsistent and eventually the penny dropped, that in this layout at least, downthrust is an unstabilising force.

Thus, latest in the line comes the 'Elf-axe', it appears to combine the tolerance of trim and the steady yet deceptively fast climb of the earlier Battle-axe with a much improved glide, and a size that fits in the average model box.

It is designed for any good 1.5 cc engine, capable of between 12,000 and 13,000 rpm with a 7x4 prop. If your engine is more powerful, then build something bigger or check your rev counter! If contests are not your main object, then any motor from 1 to 1.5 cc should do.

Flying. Try offsetting the rudder tab about 1 in for a left glide and embark on low power tests. These should show a steady left turn under power and a similar pattern on the glide. Increase power gradually and the model should perform a climbing turn in a practically unbanked attitude with the nose held high. If the angle of bank is appreciable try adding some right sidethrust (the original used 50). If the climb is 'wallowy' and the pull out bad, add some more rudder offset..." 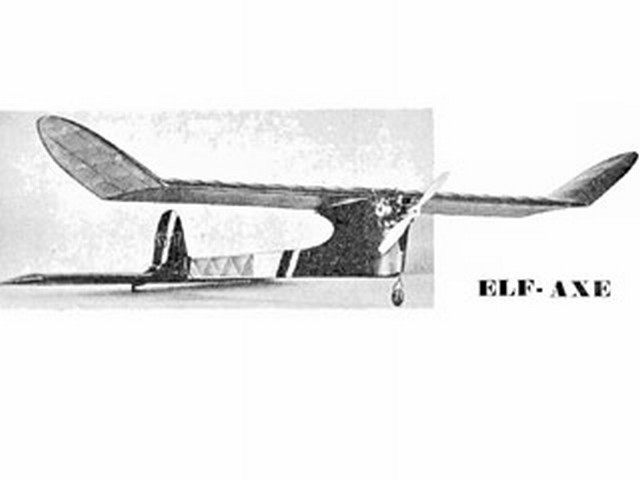